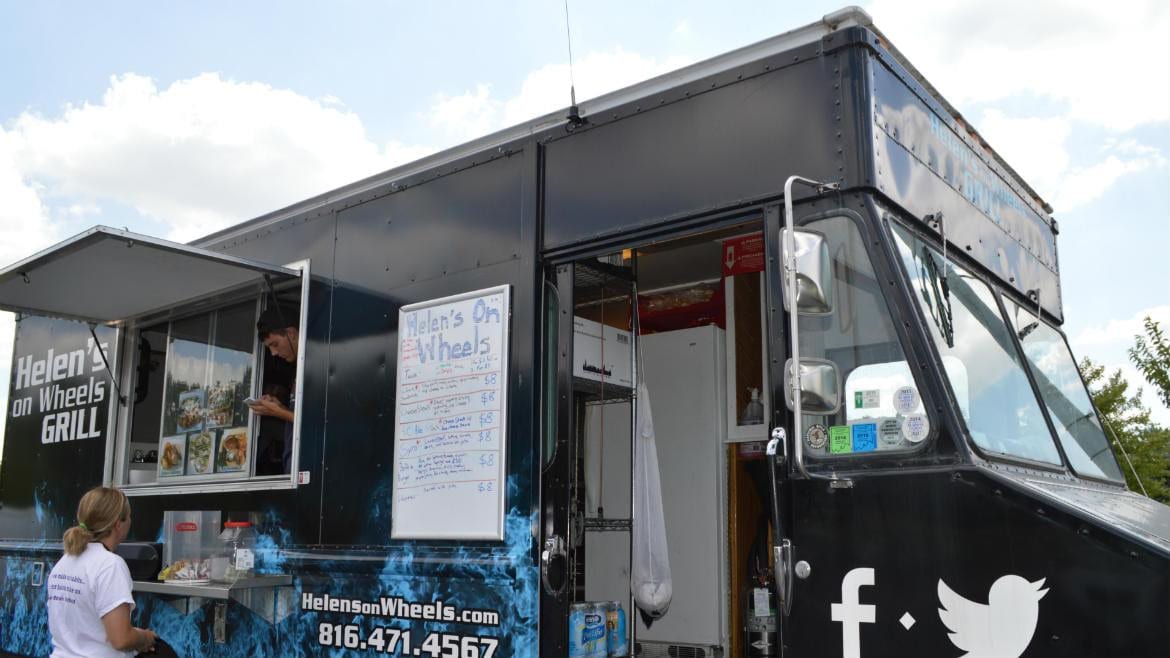 Helen's on Wheels and Plantain District were among the food trucks parked at the Macken Park Food Truck Pod this Thursday. (Photo: Jonathan Bender)
Share this story

A jogger circling Macken Park in North Kansas City stops to catch his breath and does a double take as he glances at the parking lot on his left. An impromptu dining room has sprung up with five white highboy tables a few feet from contractor’s trucks and minivans. A dozen people are eating lunch in the parking lot on a Thursday.

This is the Macken Park Food Truck Pod – a five-month pilot program launched by the city of North Kansas City in the first week of August.

“The whole concept for the food truck pod was to answer the question, ‘where are the food trucks located?’” Rachel Kennedy, the owner of the Plantain District said.

Her bright yellow truck adorned with illustrated plantains is parked about a dozen feet from Helen’s on Wheels – the two-year-old mobile kitchen run by Ron Bredemeier, who also owns the nearby Helen’s JAD Bar & Grill.

“My commissary is right down the road,” Bredemeier said. “I’ve committed to be here every (week)day this month. This is building. It will take time, but it’s bringing people to town.”

“We’re working on getting good guidelines so food truck owners can know where and when they can park,” Mallory Brown, a permit technician with NKC’s Community Development office, said. “We hope the food truck pod continues. We hope it’s a draw. We know there’s nothing like this in the metro area.”

The city of North Kansas City looked at how neighboring towns and cities approached food truck guidelines and spoke to several truck owners as part of the process of developing the food truck pod before the city council voted to approve the idea in July.

One local business owner has expressed concerns about the food truck pod. As KCUR’s Central Standard reported yesterday, Phil Shaver, the co-owner of the Little Store and Café, is worried that the food truck pod could take away his lunch business. Students at North Kansas City High School are allowed to dine off campus. 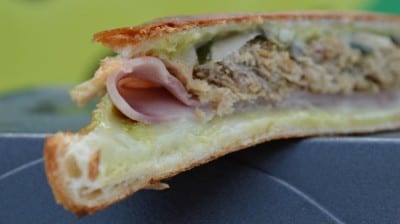 “The goal of this is to create more business, not hurt existing businesses,” Kennedy said.

North Kansas City isn’t the only municipality exploring regular vending areas for food trucks. Riverside is launching a Riverside Food Truck Court, west of Horizons Parkway and 39th Street, in the Horizons Business Park today. And chef Michael Foust, the owner of The Farmhouse, is looking at establishing a food truck lot on Southwest Boulevard in Kansas City.

Under the NKC pilot program, food trucks are allowed in the Macken Park parking lot between 10 a.m. and 2 p.m. Monday through Friday. The trucks are required to park at least three feet apart and must bring their own trash and recycling receptacles.

“I think this makes the city really progressive and it’s exciting to see what’s next,” Brown said.

While Brown estimates that 15 trucks are currently eligible to vend in North Kansas City, three have set up shop in the first two weeks. Plantain District and Helen’s on Wheels have been joined on days past by SSAACC Lunch.

According to Bredemeier, the early customers have been mostly city employees and folks that work at Cerner. They’ve been ordering his burgers, pork tacos, and the blue cheesesteak sandwich – chopped ribeye topped with blue cheese crumbles and a heavy cream blue cheese sauce on a split-top hoagie from Roma Bakery.

“You have to take a lap around the park after that one,” Bredemeier jokes as he describes the cheesesteak.

While a couple of students from North Kansas City High School debate what to order at Helen’s, Kennedy walks a pair of pork bowls – slow roasted pork over rice with a house cilantro sauce– to two men leaning on one of the white tables.

They ask for a side of hot sauce and she ducks back into the truck to fill an order for a Cuban sandwich – the signature item on her year-old truck. For the food truck pod, Kennedy has also added a $5 burger special for the high school students, who returned to school this past Wednesday. She admits that this lunch service is still in the experimental stages.

“This is about building a community,” Kennedy said. “I just hope we can bring more folks to North Kansas City.”