KC is About to Get Bagel Crazy

Meshuggah Bagels gets boiling and baking 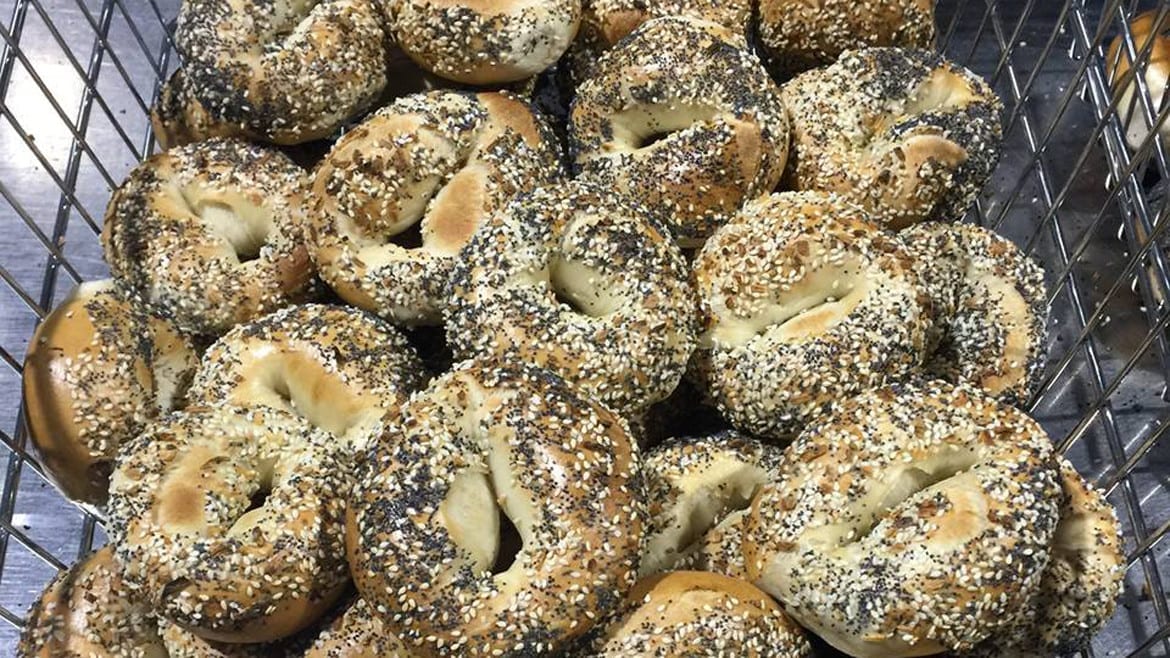 Round food makes the world go round this week with new bagels and donuts in town. (Contributed | Meshuggah Bagels)
Share this story

The man opens the glass door to a suite in a Pleasant Valley industrial park. Before the couple seated at a wooden table by the front door can even respond, he’s apologizing and explaining that he just had to visit the space for himself.

“I saw your ad on Craigslist,” said the man. “I don’t want a job. I just want a really good bagel and I could tell this was the place to come.

This place is the home of Meshuggah Bagels – the Missouri bagel maker that has bagel fiends going crazy. Owners Janna and Pete Linde smile with the polite exasperation of someone that this has happened to a lot recently. They explain that they’ll be opening their Kansas City shop in a little over a month. He leaves with a promise to see them on opening day.

Linde is seated at a dark wood table, part of a stack of furniture — a display case, shelves, tables and chairs — that is bound for 39th Street in the coming weeks. Things have been moving rapidly in the past several months for the fledgling bagel business. It’s the public response that has led Janna and Pete Linde to shift their business model even as they were opening. While they always intended to have a retail operation, they didn’t intend to launch their bagel operation with a brick and mortar store.

“The response of this community has been amazing,” said Janna Linde. “Folks calling at all hours of the day just wanting to know how they can get their hands on a bagel.”

Pete and Janna Linde have responded to the enthusiasm for their bagels by opening a brick-and-mortar store on 39th Street in Kansas City. (Photo: Jonathan Bender | Flatland)

When it opens on March 18, Meshuggah Bagels at 1208 W 39th Street will serve bagels – everything, poppy, onion, sesame, garlic, onion, and salt – along with a few kinds of schmear (plain, onion, garlic, and salmon cream cheese). The shop and company’s name is the Yiddish word for ‘crazy.’ (The logo was designed by Bob Holt, a neighbor and the illustrator best known for being of the creators of Hallmark’s Hoops and Yoyo.)

“It all goes back to the first bite of a bagel with whitefish salad that I had in Central Park,” said Janna Linde. “I took a bite and I said, ‘This is crazy delicious.’”

They’re also serving that very whitefish salad (along with lox) that Meshuggah Bagels is having flown in from the Acme Smoked Fish Corporation in Brooklyn, New York. Maps Coffee Roasters in Lenexa is also currently working on a coffee blend for the new shop. But there are a few things that won’t be on the menu.

The bagels will all be made in their bakery facility in Pleasant Valley, but they’ll have hot bagels [always ask if anything’s hot at any bagel shop you enter] in Kansas City thanks to an in-store oven that will finish and crisp the bagels.

The bagel business was something the couple had talked about doing when Pete Linde retired – he’s been working as an engineering supervisor for 27 years at the Ford plant in Claycomo. A native of New Jersey, he was always on the hunt for a “real bagel,” and a “real slice of pizza,” in Kansas City.

But last summer, Janna was rehabilitating her knee and had plenty of couch time to consider the possibility of actually launching the business. A district sales manager for an area produce company, Janna was ready for a position with less travel that still allowed her to be in the food world and directly interact with customers. A business plan turned into a home equity credit loan. And Pete began making dozens of late night batches in their home kitchen.

“I was on a quest for how to make a bagel that tasted like a bagel,” said Pete. “And Janna had to find legitimate bagel equipment in Kansas City, Missouri.”

After four months of testing at what they estimate to be “60 to 70 batches,” the couple was happy with the recipe – the last entry in an inch-thick blue notebook filled with Pete’s notations.

“You have to have the right balance of sugar and salt and the right amount of malt. The water, flour and yeast to a certain extent are fixed,” said Pete Linde. “The dough can’t be too wet or it won’t go through the former and it can’t be too dry because then the ends don’t join and you have horseshoe instead of a bagel.”

As to those who maintain that New York City water is necessary for the best bagels, Pete Linde wants to help set the record straight.

“We developed our recipe with Kansas City tap water,” said Pete Linde. “The only thing we do is use a charcoal filter to make sure we’re getting the best of the water out of the tap. These bagels are proof that the water doesn’t matter.”

This fall, they found and retrofitted a commercial space in an industrial park in Pleasant Valley. After having equipment refurbished and shipped from the East Coast, the couple spent the two months between last Halloween and Christmas scaling up their recipe. Rabbi Mendel Segal – perhaps best known locally as the pitmaster of Rabbi-Q — certified their kitchen as kosher. Meshuggah Bagels had its debut this past December when they catered the Jewish Federation of Greater Kansas City’s Bagel Bash.

The bagel process begins in the mixer with 100 pounds of flour. After 10 minutes or so, the dough is ready when it has what Janna deems “texture that pulls like velvet.”

The dough is then sliced into strips on a stainless steel table before being shaped into rounds by an automated divider former. Pete Linde hand-formed the first batches in his kitchen, but the expected demands of their wholesale business required mechanizing the process. The couple is considering adding cinnamon raisin bagels in the future as a hand-rolled Sunday special and maybe a bialy, a baked disc with a depression in the center, rather than a hole. Think of it like a bagel cousin.

“We’re going to focus on bagels first, we’re just in the early stages of developing a bialy we like,” said Pete Linde.

The dough rounds are put on proofing boards before they’re boiled. This is why they’re sometimes called water bagels — boiling forms a skin on the outside of the dough and stops the proofing process. Then it’s on to the bagel boards – wet cedar boards wrapped in burlap. The bagels and boards are put in the oven. The wet boards let off steam, which load the bagels with moisture and keeps them from sticking. The bagels are then flipped and baked for several more minutes with the toppings face up.

“The outside has to have that bite or crust that resists your tooth a bit,” said Pete Linde. “The inside needs to be so moist that when you tear it open you see steam coming out.”

Before their shop opens in March, Meshuggah Bagels will be at the Kansas City Brewfest on Saturday, February 27.

curiousKC | Is Plant Diversity the Future for the Midwest?

Striking a Balance With Nature