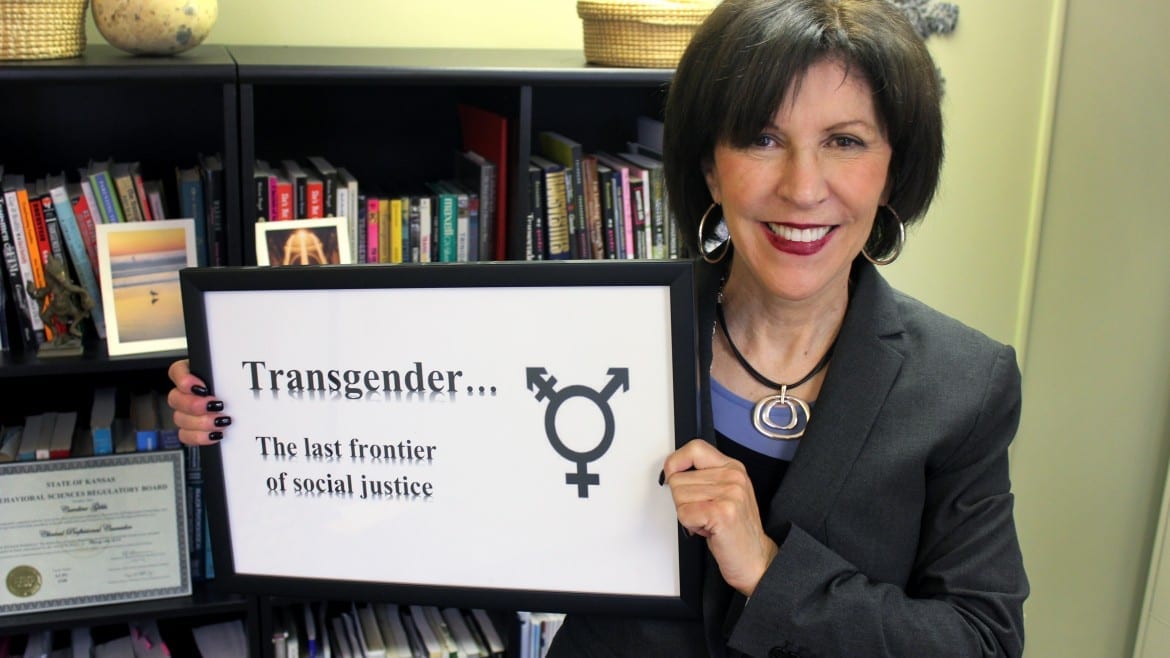 Caroline Gibbs is the founder and director of the Transgender Institute in Kansas City, Missouri. (Photo by Lindsey Foat, Flatland)
Share this story

One of the first questions gender therapist and coach Caroline Gibbs asks people who are considering transitioning from male to female or from female to male is if they want to “blend into society.”

Gibbs said that nearly everyone she has worked with at the Transgender Institute answers that question with an emphatic yes.

It has been 12 years since Gibbs worked with her first transgender client, and, to date, she has helped over 1,000 people transition. This has meant not only counseling individuals and their families, but also connecting clients with resources to make their voice, hair, makeup, clothing and, in some cases, jobs match the gender they identify with.

Six local women that Gibbs worked with are the stars of the reality show “New Girls on the Block,” which will premiere Saturday, April 11 on the Discovery Life Channel.

This Saturday, some of Gibb’s clients from the Transgender Institute will share their insights about transitioning in Kansas City after a free screening of the documentary “Kumu Hina.” Gibbs will also be there to speak about her work with the institute. The film follows a transwoman and transboy in Hawaii, where Pacific Islander culture celebrates those that are “in the middle” between male and female.

Gibbs has big plans, including helping other cities open their own Transgender Institutes and building a Kansas City shelter for homeless trans women and men. She spoke with Flatland about the history of the institute and her vision for the future.

What is The Transgender Institute?

“The Transgender Institute is a holistic organization that serves the needs of transgender or transexual people that are looking to find out if transitioning is appropriate for them, and, if so, how they’re going to do it. Our job really is to walk them through that process.

“We decided years ago that to sit and talk with people the way we do in general therapy wasn’t sufficient. Just chatting with people wasn’t the whole story of what they needed. So with that understanding, what we moved ahead with for the male to female person was to get resources like a makeup artist on board… because often these are male-bodied people moving into the gender of woman, and, in general, have not been socialized to act like women.”

What made you realize that this sort of organization needed to exist?

“About 20 years ago, I met a group of transsexual people. They were the first people that I was cognizant of as being trans. These folks, both male to female and female to male, decided to go around and teach clinicians, psychiatrists, psychologists and counselors about what being trans was all about.

“At that time, there were so few therapists who worked in gender therapy that people who would go to a counselor to get letters (to approve) hormones and surgery, patients were having to teach their therapists how to treat them and what to do and the questions to ask and so forth. So it was pathetic. It was so sad. They really got no care at all and were treated poorly.

‘When I started my counseling practice, I started with domestic violence and several other specialties. Then I took my first transgender patient. I was nervous about it, because no one could teach me how to do it. But I started with one person about 12 years ago …. and then I just had more and more and more.”

Since you started the institute about six years ago what sort of response have you seen?

“There is a huge need. There are so many people that haven’t come out yet. There’s a much larger prevalence for this population than has hitherto been thought. The latest information tells us that it’s about 1.2 percent of the population.

“I kind of feel personally that the Transgender Institute has anchored this city for transgender people. It’s like a safe place that we made; kind of a safe haven where people know they can come where they will always be cared for and always be respected. We treat people from three years old up to — currently the oldest person is 74.”

How is the coming out process different for a trans person than for someone who is gay, lesbian or bisexual?

“Well, first of all, there is not as much difference as you would imagine because keeping a secret, stultifying yourself and holding the most important aspect of you away from every public arena and every eye for your whole life is something that both of these populations have had to do historically if they wanted to live in certain circumstances.

“The coming out process for a trans person involves changing the body to match the gender identity, which is how we think of ourselves as male or female or as a man or a woman. So they are quite different when it comes to actually beginning to transition or ‘come out.’

At the heart of the coming out process, there is a huge difference. For gays and lesbians, it’s about sexual orientation, which is who you are attracted to and who you love. Trans people, on the other hand, entirely are about gender identity. They can be lesbians, gays, bisexual, asexual or anything that anybody else can be.”

What do you hope “New Girls on the Block” will accomplish?

“I hope that it will entirely change our society. Nothing less. That is a lofty goal, and it’s not just this show, but reality shows that are yet to come that will pick up on this theme. We see transgender everywhere now. You can’t pick up print, turn on T.V., radio or whatever and not see something about transgender. And so I feel like this will be a huge piece for people to understand that this is a real, normal condition, like a natural variation. We don’t understand exactly how the genetic, biological and hormonal aspects of it work. I mean, truly the scientists and researchers are having to dig very hard, but they are finding solid evidence that this has nothing to do with it being learned. It’s not a choice. It’s not learned, it is medical.

So I have gigantic hopes for this. I think it will help to normalize the transgender population because the emphasis (of the show) is really just on the girls being girls popping around Kansas City.”

Is there anything else that I haven’t asked you that you think is important for people to know?

“We believe when you help somebody go through such a big shift as this in their life, it can be complicated and difficult. But what we stress is the joy and the love of it. This is about the dream of your life coming true.

“I just want to underscore the fact we do this work with joy, love and respect. And people who come here can feel safe.”

Editor’s note: This interview has been condensed and edited for length and clarity.