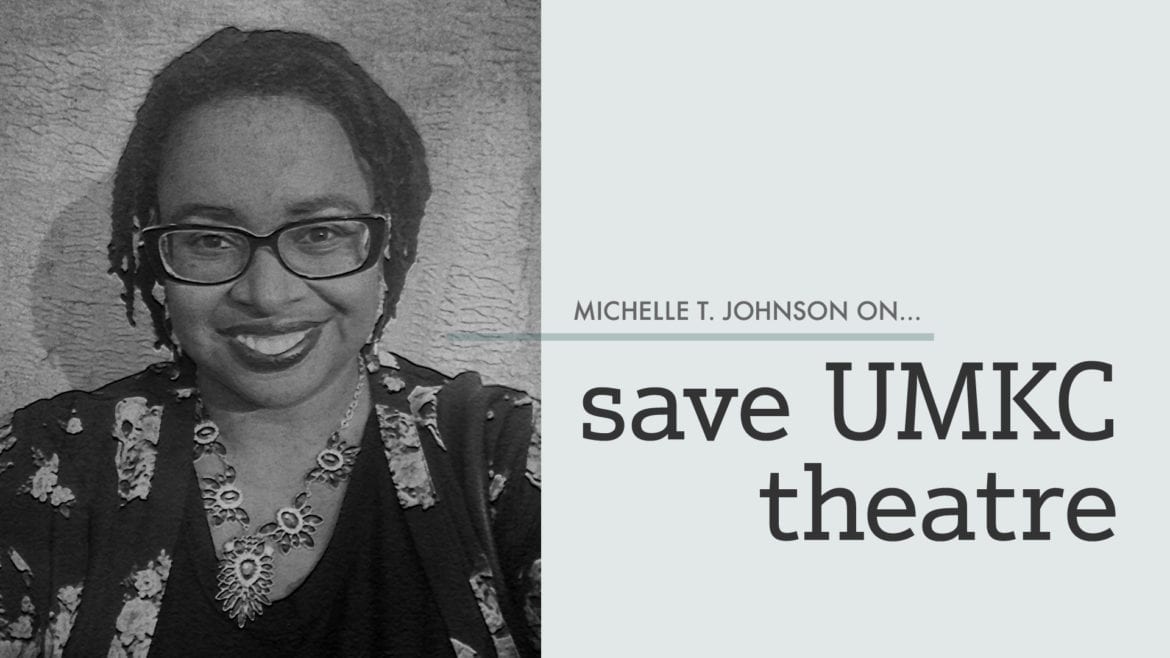 Society does a real number on us regarding what the “important” professions are in the world. As with many beliefs we are indoctrinated with, they’re not always true.

That’s why when I look at the budget threat to the University of Missouri-Kansas City’s theater department, including the potential cut of four more faculty members, I find myself deeply upset and angry.

I didn’t go to UMKC and neither of my degrees are in theater. But I have seen over and over again how theater professionals put their whole selves on the line to make people think beyond their own lives and experiences. It’s not for money. It’s certainty not because being in theater is a high-status job.

When I was in high school, it was a major deal that my grandmother let me use the dining room table to spread out my college applications when I had my heart set on being a journalism major. Ten years later, as a working journalist in Austin, Texas, I again had applications spread out, this time for law school.

But pound for pound, paycheck for paycheck, it’s the theater where people give everything they have to stage work that says something significant, something they hope has a shot at changing the world.

Through those years of reporting and trying cases, I had glimmers of it all feeling worth it, as if I gently impacted the rotational axis of the world. Like me, many in journalism and some in law are driven by their positive impact on the world.

But pound for pound, paycheck for paycheck, it’s the theater where people give everything they have to stage work that says something significant, something they hope has a shot at changing the world. People who work just as hard at a production for 20 people as they do for a packed house.

Yes, theater in every community — just as in every other profession — has its egos, its known narcissists, its share of fluff and manure. But overall, I’ve never met more members of a group consistently committed to using their work to create story and spectacle that brings heat and light.

Between teamwork and sacrifice, risk of public humiliation, and walking the tight rope of live theater that often leaves no room for error, theater folks exhibit every positive attribute that parents and schools say they want their children to exhibit.

Live. Visceral. Immediate. Pulsating. Sensory. Theater is a medium where I’ve seen grown men weep in their seats. Where I’ve seen women gasp in emotional recognition. Where I’ve seen children delighted and beguiled. And that doesn’t even touch the looks I’ve witnessed on the faces of theater creators — lighting and sound people making sure the lights and cues are just so, stage managers and costume designers who maximize the impact of every object on the stage, actors and directors and writers who lose sleep on creating the right amount of alchemy to take the story from the stage to the heart.

Last month, a play I wrote, “Justice in the Embers,” led to recognition for myself and others from the Midwest Innocence Project for raising awareness in the case — and eventual prison release — of a local man.

Budget cuts reflect priorities. That’s why entire departments in organizations can remain untouched when decisions have to be made.

I hope the University of Missouri System looks at theater as a priority — for those potential students, with their applications spread out around them, wanting to go into theater to change the world, and for those working theater professionals who do change the world.