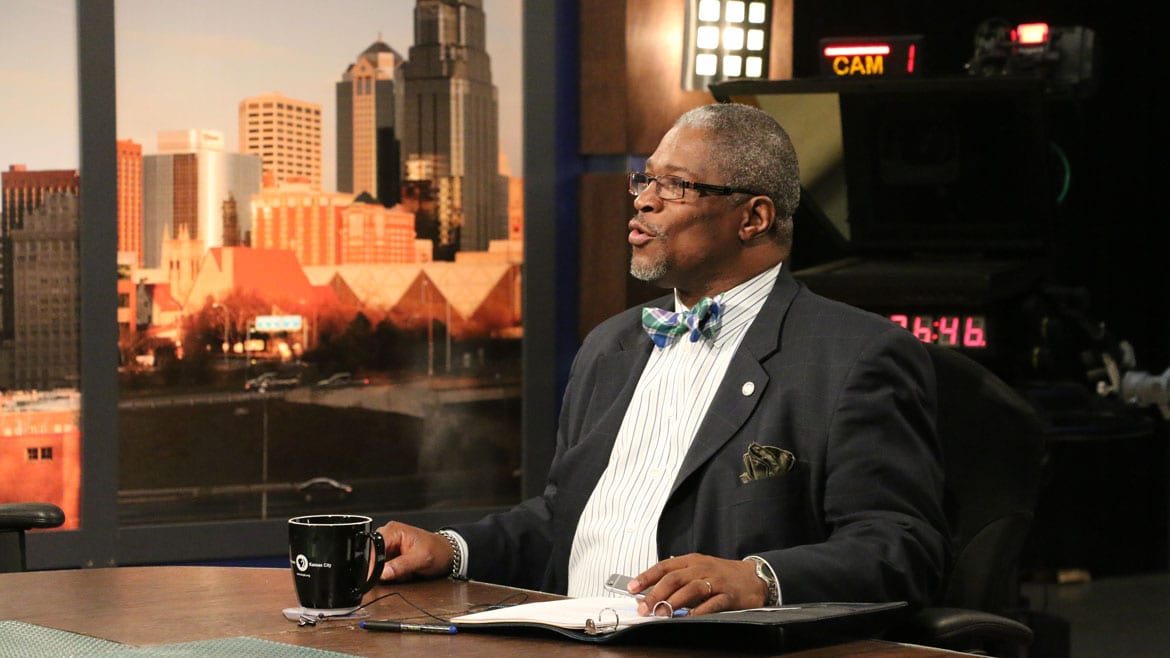 “The problem is that we have so segregated ourselves in our society in general that we don't have normal, everyday contact with people,” Sly James, mayor of KCMO, told Flatland today after a taping of KCPT's "Kansas City Week in Review." Photo: Caitlin Cress, Flatland
Share this story

Kansas City’s mayor has a lot to say when it comes to the relationship between crime reduction and race in KC. While KCMO ended 2014 with the lowest number of homicides since 1972, James said these 78 murders were still too many. The real path to crime reduction, he said, is honest communication.

The show normally features local reporters who dissect the news, but this week, as host Nick Haines said, the newsmakers were invited instead to discuss one issue: crime in Kansas City.

James and his fellow guests discussed many paths to crime reduction in KC, from body cameras on police officers to scholarships for minority students interested in policing.

The mayor told Flatland that all of these pieces may help, but none are a complete solution on their own.

Speaking about body cameras on cops, James said, “This concept that body cameras solve this problem needs to be dialed back some. People are putting too much emphasis on it and I think they’re going to be disappointed.”

During the “Week in Review” taping, Chief Forte said a task force has been assembled to figure out the logistics of body cameras for KCMO police. He said they will eventually be implemented, but a timeline for this process has not been established.

In the meantime, according to James, there are many things the KC community can work on together to fight crime. He said that most of the violent crime in this city is confined to areas where there is also the most poverty and the lowest rates of education.

“You don’t see Ph.D.s killing master’s degree candidates outside at UMKC. You see high school dropouts, kids that don’t have any future, no hope, no nothing,” Mayor James said.

“All of these things are connected,” he told Flatland. “You don’t see Ph.D.s killing master’s degree candidates outside at UMKC. You see high school dropouts, kids that don’t have any future, no hope, no nothing. They’ll kill each other because, as far as they’re concerned, their life doesn’t mean anything, so what the hell do they care about (anyone else’s)?”

James added that he doesn’t believe that it is a coincidence that most of the victims and perpetrators of violent crime — those who live in under-educated and poverty-stricken areas — are people of color.

“When you talk about those victims or those perpetrators who are using guns on victims, they’re overwhelmingly black and brown,” he said. “We can’t ignore it and act like, ‘Gee, that’s embarrassing.’ It’s the truth, and we need to address that issue.

“All of these things are connected,” he continued, “but it all starts with recognizing, first of all, that we have a problem, and going through the 12-step program to try to address it. We haven’t gotten to the steps necessary to address it.”

James said one step crucial to reducing this violent crime is hiring more minority workers in positions across the city. It’s important to realize that, for parts of Kansas City, “basic role models are more likely to be somebody who just got out of prison then somebody who just walked out of the CEO’s boardroom,” he said.

“The problem is that we have so segregated ourselves in our society in general that we don’t have normal, everyday contact with people,” he told Flatland. “You know, if you’re not spending any time with people of a different race, then everybody is going to be odd to you or you’re going to feel uncomfortable.

To hear more of Mayor James’ comments, plus input from Police Chief Darryl Forte and Jackson County Prosecutor Jean Peters Baker, watch KCPT’s “Kansas City Week in Review” tonight at 7:30 p.m. Mayor James will also serve on an upcoming February 25 panel discussion and community conversation about race, immigration and the American Dream at the Gem Theater with the producers of Your Fellow Americans. To learn more and RSVP for this free event, visit kcpt.org.