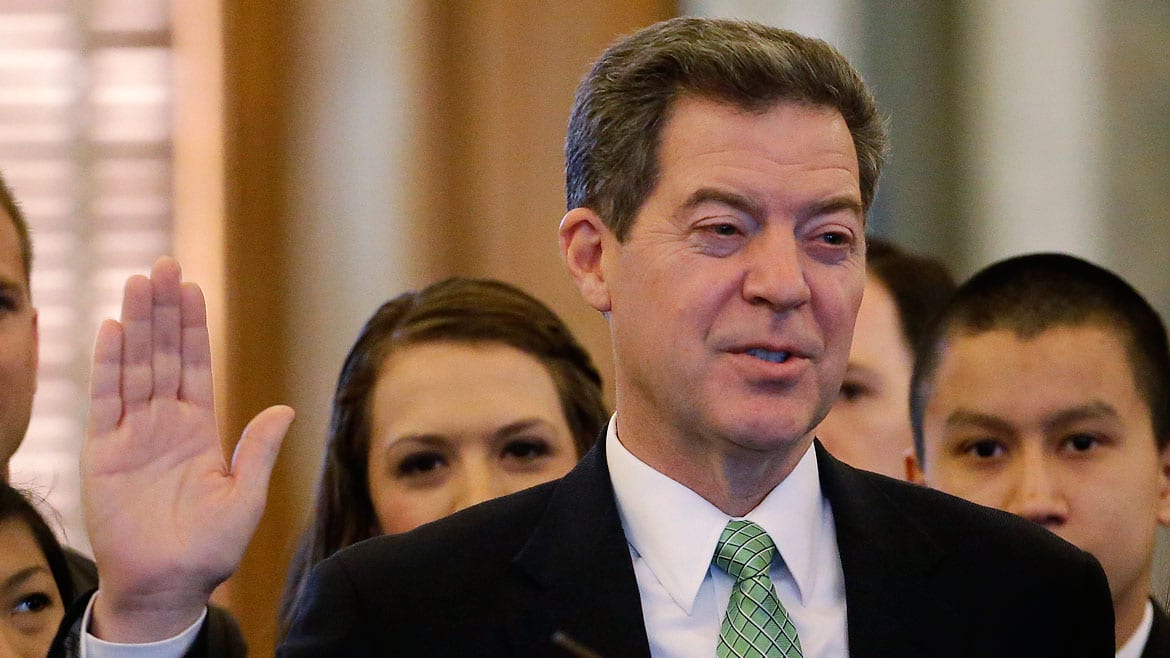 In the several days since Gov. Sam Brownback rescinded protected-class status for Kansas state workers who identify as LGBT, the mostly negative reactions of other politicians, journalists and Kansas citizens have crowded news sites and social media.

On Tuesday, Brownback rescinded an executive order — issued by former governor Kathleen Sebelius in 2007 — that granted state employees protection from job discrimination against their race, religion, age, country of national origin, sexual orientation or gender identity. Brownback then issued a new protected-status executive order, but conspicuously absent from his list were LGBT Kansans.

Equality Kansas — an organization that aims to end LGBT discrimination —  was one of the first to jump on the reaction train. Shortly after the news of Brownback’s action broke, the organization tweeted photos of Sebelius signing the original order.

Thomas Witt, the executive director of Equality Kansas, led the team that negotiated the language for Sebelius’ executive order.

“What came out of those negotiations was something that was very inclusive and very forward-leaning,” he said. “It was a commitment from the governor’s office to make sure LGBT state employees were respected and not harassed or fired or otherwise discriminated against.”

Witt said the reversal of this commitment was not unexpected, but distressing and disappointing nonetheless.

“The state government made a promise to its LGBT employees,” he said. “These people came out at work over the past eight years. They did that believing that our government is going to treat that with respect. Brownback broke that promise. He has now declared open season on every LGBT state employee currently working for the state of Kansas, anyone who has come out.

“It’s not like that closet door works both ways,” he continued. “It only works one way. You come out, you’re out. That’s it.”

Who the hell looks at a law and goes, "Yeah, this law that protects citizens. Let's remove this." #Brownbackwards

Ah, Governor Brownback showing the same disregard to #LGBT state employees that he did to his state's finances #Brownbackwards

These tweets also saw a surge Wednesday evening when Jon Stewart included Brownback’s decision on “The Daily Show.” The line from his report that was tweeted the most frequently appealed to the “Wizard of Oz” fan in every Kansan: “There’s no place like homophobia.”

An opinion piece in the Kansas City Star by Yael Abouhalkah called Brownback’s action “a stunning move of bigotry.”

The initial media release from Brownback’s office, however, provides a different explanation for the removal of protection for LGBT state workers. An explanation for why Sebelius’ order was rescinded and Brownback’s revised order was issued and reads as follows:  “This Executive Order ensures that state employees enjoy the same civil rights as all Kansans without creating additional ‘protected classes’ as the previous order did,” Governor Brownback said. “Any such expansion of ‘protected classes’ should be done by the legislature and not through unilateral action. The order also reaffirms our commitment to hiring, mentoring and recognizing veterans and individuals with disabilities.”

Witt doesn’t buy this explanation, nor does he buy suggestions that Brownback did this executive order flip-flop to distract from negative attention surrounding Kansas’ budget.

“This is not a distraction,” Witt said. “This is Gov. Sam Brownback. This is what his views are.”

KMBC-TV 9 spoke with Sebelius, who said she was “surprised, appalled and baffled, frankly, by what I read” about Brownback’s new executive order.

Reactions to the governor’s decision Tuesday have not been hard to come by, but reactions from LGBT state employees — those actually affected by the order — have been scarce. KCUR did speak with Elle Boatman, a transgender woman who works at Wichita State University.

Witt had an explanation for the lack of media access when it comes to LGBT state employees.

Dear reporters: NO. I will not ask an LGBT KS state employee to talk to you. They talk today, they get fired tomorrow. Think this through.

“Frankly, I posted that in frustration because I had seven or eight — maybe even as many as nine — news organizations yesterday morning insist that we provide them names of state employees who could be affected by this rescission of the executive order,” he said. “Quite frankly, it’s a ridiculous request. These are people who can now get fired for being openly LGBT. I would not ask anyone to go on T.V. or on the radio or in print talking about this issue, given that they could talk today and be fired tomorrow.”

He said, generally, that affected Kansans are concerned and afraid.

“These are men and women with families, with homes and mortgages and car payments,” he said. “They’re Kansans. They’re human beings. Now, it doesn’t matter what the quality of their work is. It matters who they go home to at night.”

Equality Kansas and Planting Peace — a Topeka, Kansas, organization that promotes peace, including LGBT rights — are hosting a rally Saturday on the south lawn of the Kansas State Capitol. The protest will allow those affected to gather and vent, Witt said.

“People need an opportunity to come together and share their frustration and anger at what the governor has done,” he said. “We’re going to help them with that.”