Ask for it three-way or five-way, just don't ask for ketchup

Sometimes it is about the size of the dog.

Back in March, Ronnie McGowan – a Tulsa native that has lived in the Kansas City area for the past two decades – looked around the local landscape and saw something missing from the hot dog spectrum. Kansas City had cocktail weenies and foot-long dogs, but nobody was grilling and slinging chili-cheese topped Coneys nestled in six-inch steamed buns.

“I’ve always thought Coneys should be here,” McGowan said. “I’ve lived here since 1991 and it’s always bothered me that nobody has done it. So, I decided to roll the dice.”

McGowan, 42, opened his restaurant, Coney Island, six weeks ago at 7753 Quivira Road, in a Lenexa strip shopping center. The goal was to recreate a Tulsa classic – an homage to the Coney I-Lander shops as common as Art Deco architecture in the city.

“A Coney should be a combination of beef and pork with natural casing and a little smoke flavor,” McGowan said. “Then you’ve got the mustard and the spices in the chili, cheddar cheese, and onion. Those are all simple ingredients that come together really well.”

McGowan grew up in Tulsa, in a family where the men did the cooking. His father John Youngpeter is a chef and his brother is a baker.

“For Thanksgiving, the women in my family sit in the living room watching football,” McGowan said. “I don’t even think they’re allowed in the kitchen.”

Coneys were always a big deal. His father developed his own chili recipe and still stops by the Coney shops once a week. McGowan grew up to be a delivery driver, with a route that stretched from Dallas to Kansas City. He settled in KC because he loved the fall weather and the fact that it felt like where he was raised.

“Kansas City just grew on me. It’s like a bigger Tulsa,” McGowan said.

And while he worked his way through a series of jobs – most recently running an auto repair shop – he kept toying with the idea of opening a place that served Coneys.

“It’s got this addicting taste,” McGowan said. “I knew if I could just get people to try them, they’d come back for more.”

McGowan signed the lease on the space in March and opened this July. Since then, word has begun to spread among former Oklahomans and Cincinnati natives. 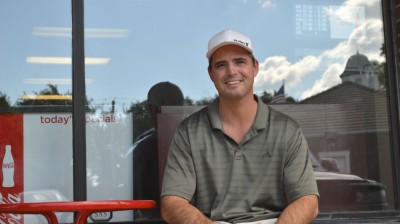 Ronnie McGowan, owner of Coney Dogs, is a Tulsa native who settled in Kansas City. “I’ve always thought Coneys should be here,” he said of the iconic hot dog popular in his home town. (Photo: Jonathan Bender)

“Here’s the thing about Coneys. They’re really not a New York dog,” McGowan said about the name, which occasionally causes confusion. “This thing developed during the Great Depression. The idea was a small Coney, not a huge all beef hot dog.”

The Coneys begin with a steamed bun – McGowan is still experimenting with different bun suppliers – and a dog grilled on a roller. Next, yellow mustard is added.

The soul of the Coney is McGowan’s chili. It has 24 ingredients. He’ll name the ones you’ll taste off the bat – clove, cinnamon and chocolate – but he won’t divulge the entire recipe. McGowan uses ground beef as opposed to the beef hearts that are traditionally used for a Detroit-style Coney. Adding cheese on top is another difference. He also wants Oklahomans to know while his chili is distinctive, it’s still in the traditional style.

“For those that ask, ‘what’s the difference between this and a chili dog,’ I tell them it’s a beanless, Greek recipe chili. Greek immigrants moved to Tulsa and brought Cincinnati-style Coneys,” McGowan said. “My chili doesn’t have as much cinnamon as Coney I-Lander. It’s got some cayenne and chili powder to give it a kick on the backside.”

The chili has echoes of local barbecue – sweet on the front with a little heat on the end, and McGowan has started selling pints to go. After the chili – which is more of a sauce than a soup – he layers on shredded mild cheddar cheese and chopped raw onion.

“The coney has to have a good casing and snap. When you bite into it, it should make you feel better. It’s got these juices inside that come out of the dog with the first bite and then mix with the mustard, spices and cheese. It’s just like…this is really good,” McGowan said.

In addition to the Coneys, you can also get chili and cheese atop Fritos chips (Frito pie) or spaghetti, a la Skyline Chili in Cincinnati. If it’s just chili and cheese, you’re having a three-way. You can also add onions and kidney beans to make it a five-way.

While McGowan is intentionally keeping the menu small, like the 19 Coney shops in Tulsa, pasta is where he’s adding his own touches.

“I know that not everybody wants their food covered in chili and cheese, so I thought, ‘What more can I do?’” McGowan said.

The more is spaghetti and meatballs, lasagna (a mix of ground beef, mild Italian sausage, and a three-cheese blend of romano, mozzarella, and ricotta), and fettuccine Alfredo featuring a scratch sauce made with whipping cream, butter, and cream cheese.

“That fettuccine Alfredo melts in their mouth and my red sauce is a little sweet with some crushed red pepper flakes to give it a kick,” McGowan said.

In the next few months, McGowan wants to add a Chicago hot dog with sport peppers, neon green relish, a pickle slice and celery salt on a poppy seed bun. But more importantly, he wants to continue to spread the gospel of Coneys.

“I know I have to make one location successful, but I want to spread this thing,” McGowan said. “It went from Cincinnati to Tulsa. Why can’t it become a thing here?”