'Art in the Square' hopes to makeover historic park 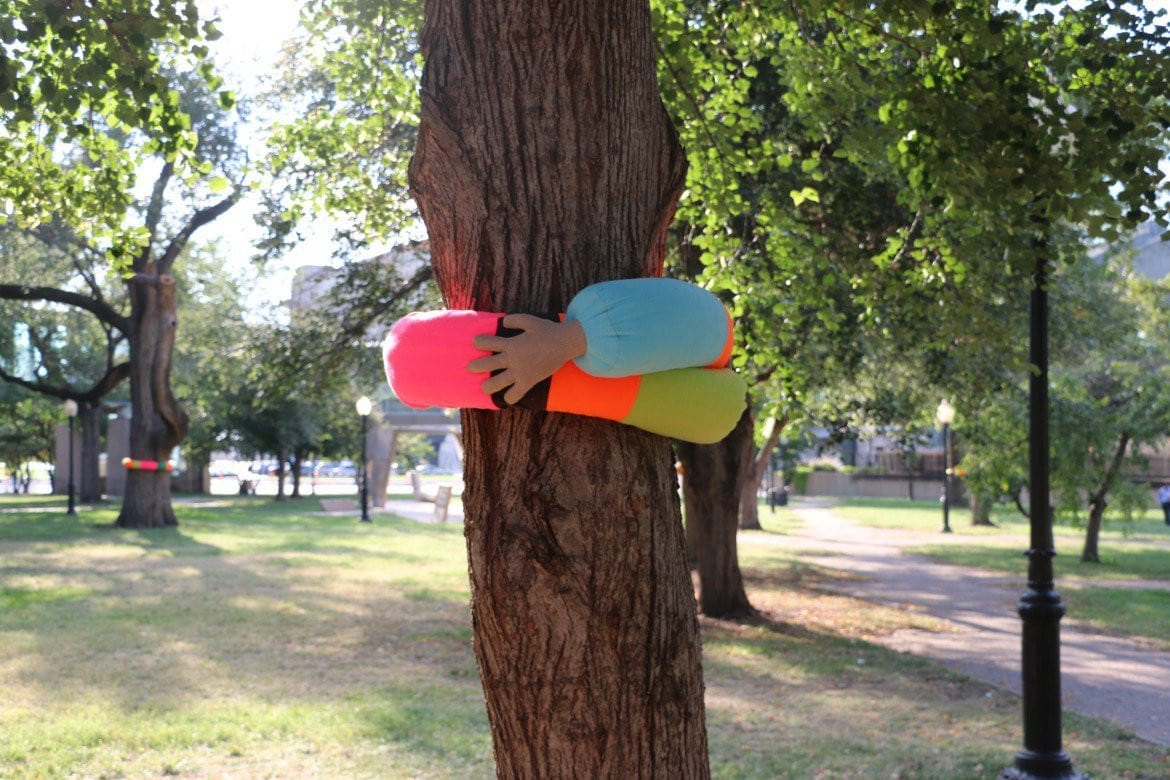 George Washington finally has something to look at.

Since its dedication in 1925, the 16 foot bronze cast statue of George Washington on his horse in Kansas City’s Washington Square Park at the corner of Grand and Pershing road has been the only piece of art in a park many Kansas Citians have deemed an “eyesore.”

However, the Parks and Recreation Department of Kansas City kicked off its first annual “Art in the Square” Friday evening, as part of the department’s efforts to revitalize and reimagine the historic downtown park.

“I want to talk about what is going on here at Washington Square Park, a little jewel that we have here, that I think has been underappreciated, but that is all changing, and this is one of those examples of that,” said Kansas City City Councilmember and Mayor Pro Tem Scott Wagner.

In anticipation of Friday’s unveiling, the city chose five artists from a large pool of candidates. Wagner said at the kickoff event that it was important to choose homegrown talent as opposed to bringing in artists from out of town.

“We want to elevate our local artists to our local population,” Wagner said. “I feel many times we fail to recognize the talent that we have here within the city,” he said.

“Art in the Square” runs through December 21st. Admission is free.

Here are the featured pieces, the curator’s notes, and what the artists told Flatland was their inspiration. 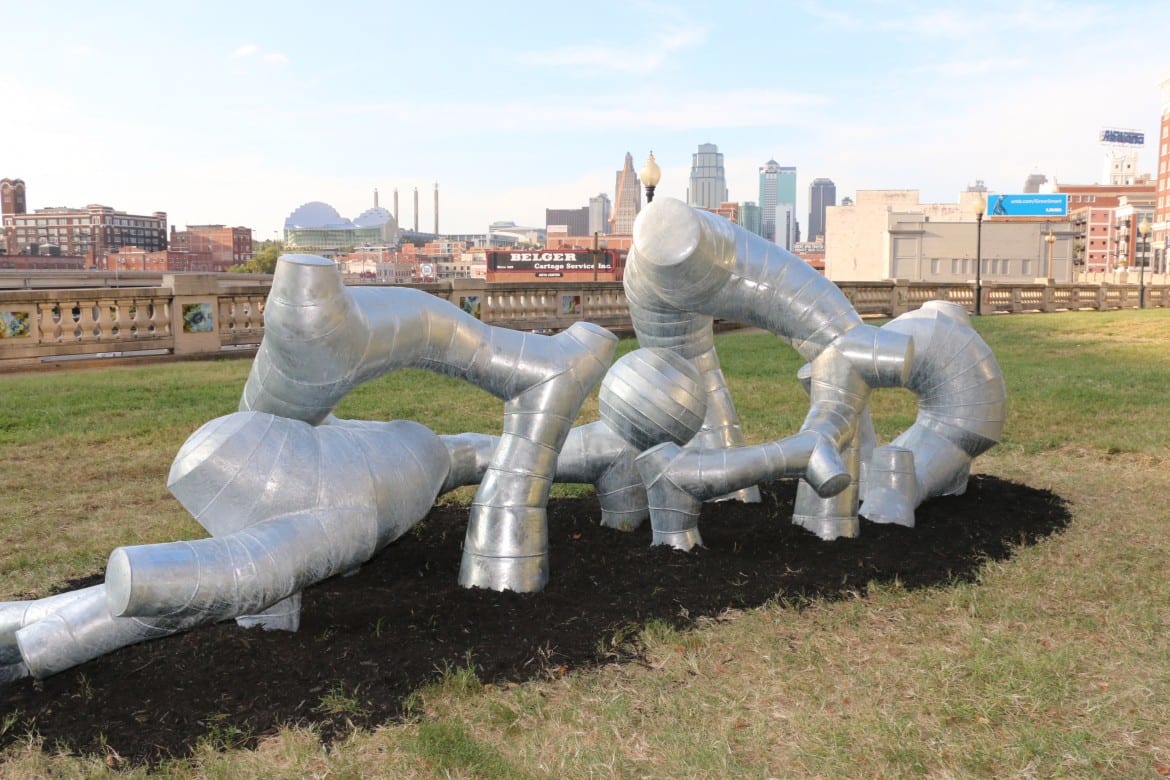 Curator’s note: “‘Moon Garden’ blurs the boundaries between growth and architecture with a sculpture that is static, yet appears to be lush and growing.  This temporary environment is a draw for curious passers-by who are encouraged to linger and interact with the presence of the work.”

Artist William Vannerson — “In the park there are some touchstones with the structures of growing things around you but also the rationalities of these neo-classical flourishes you see on the architecture.” 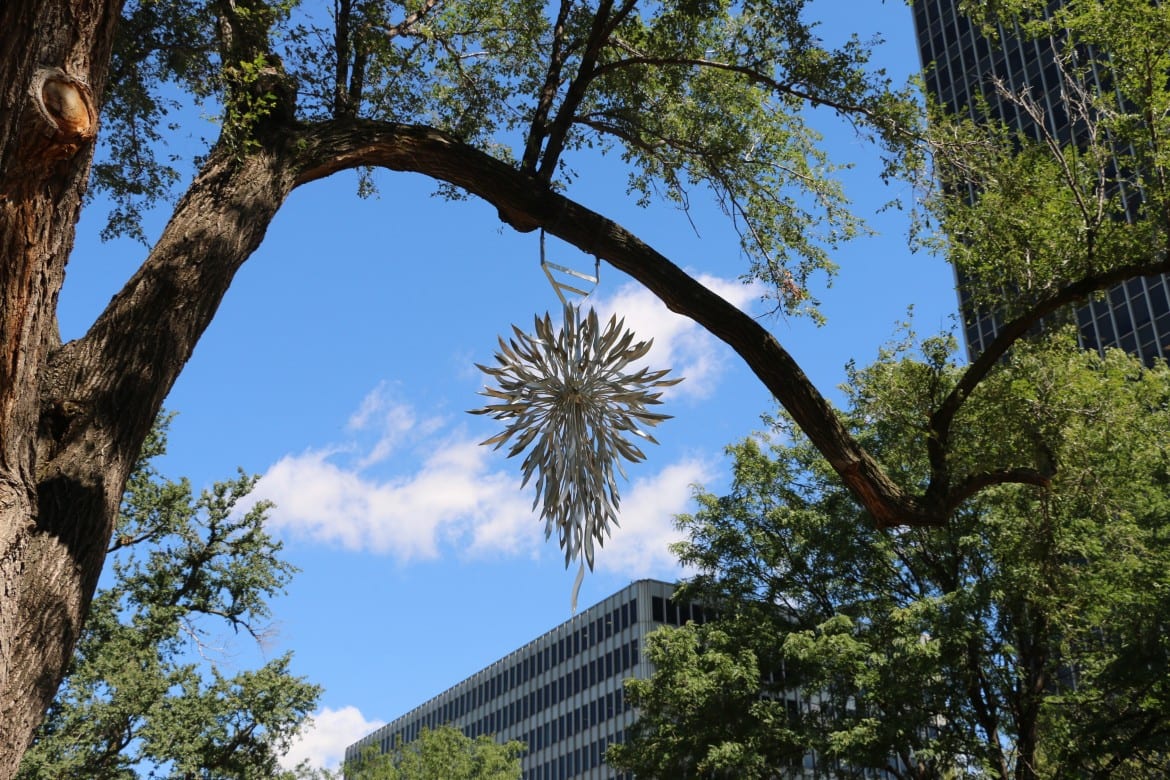 Curator’s note: Modern Respite is an impressive aluminum sculpture, hung from a tree in Washington Square Park.  The sculpture takes viewers on an unexpected visual journey evolving from a geometric core and radiating out into a distinct organic shape. The shape resembles a delicate chandelier crowning the City’s historical Washington Square Park.

Artist Jake Balcom — “My goal was to create a visual surprise, that people walking by or driving by, (the piece) would spark their curiosity and drag them into the park. Hopefully, they take a look at my piece and then snoop around and take a look at the other art, or just be in nature.” 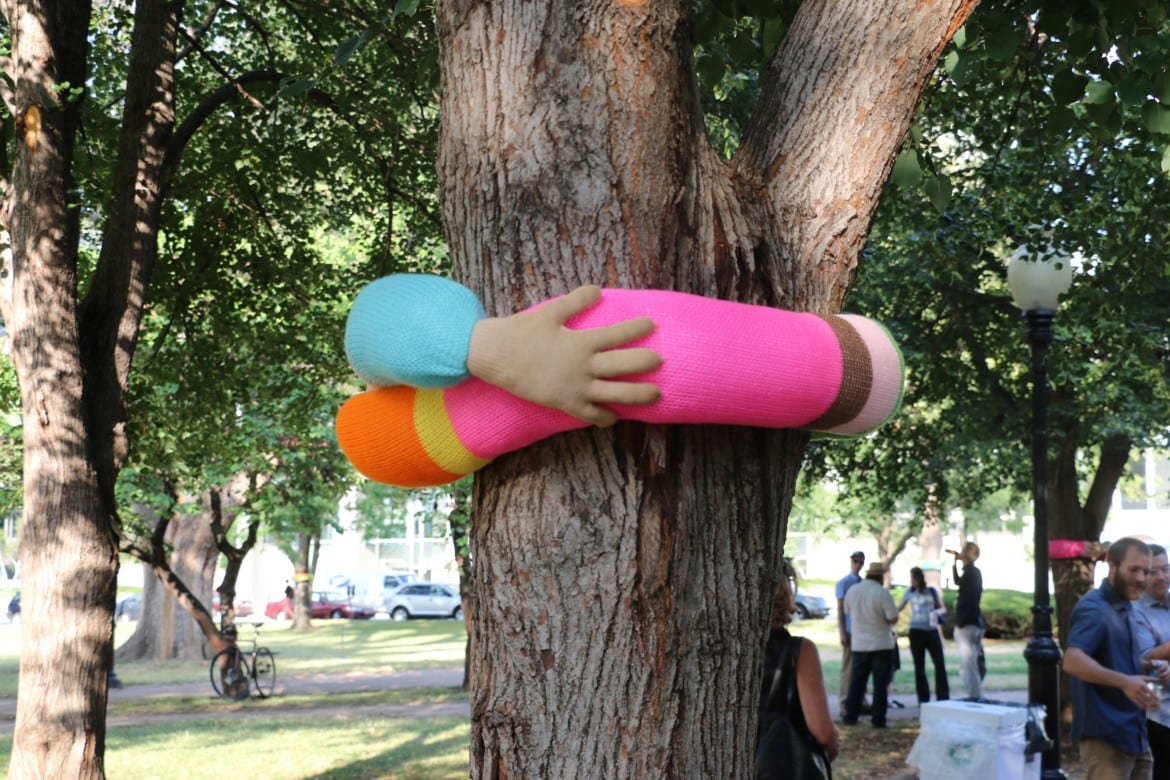 Curator’s notes: “We might not all be Tree Huggers, but we can all appreciate nature. This whimsical art display reminds viewers to take a moment to appreciate and care for Kansas City’s natural surroundings.”

Artist Rie Egawa — “For the past six weeks I have been sewing every waking hour.” 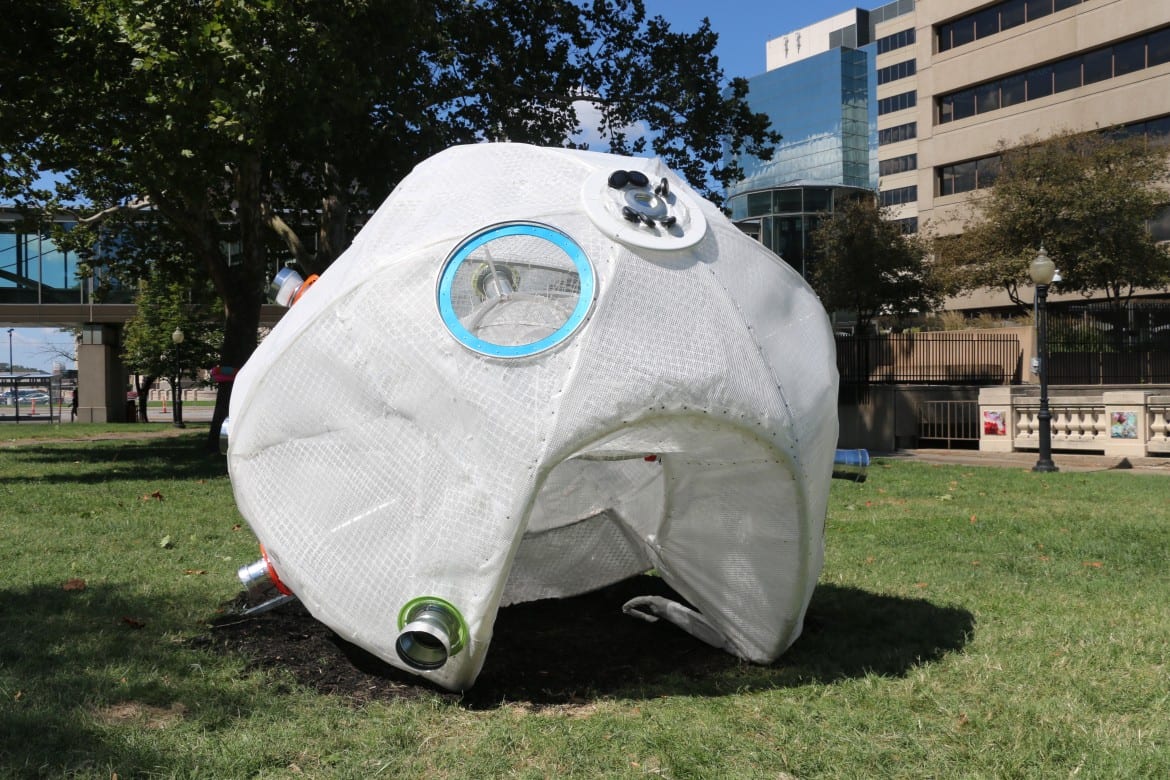 Curator’s note: “‘Oculus highlights nearby landmarks by creating a series of interactive viewpoints. Oculus is a 10-foot spherical framework covered in a semi-opaque skin; the sphere is intertwined with magnifying glasses, lenses, mirrors and solar lights to create a circular environment for experiencing the surroundings from various vantage points. On the evening of Sept. 27 there is a unique opportunity to view a total lunar eclipse through the lens of Oculus.”

Artist Denise DiPiazzo — “I wanted it to be a piece that, as this park sits in the center of downtown and looks out, my piece sits in the middle of the park and looks out radially; along to different landmarks around the city that you may not notice or you might see in a new way when you look through the viewports.” 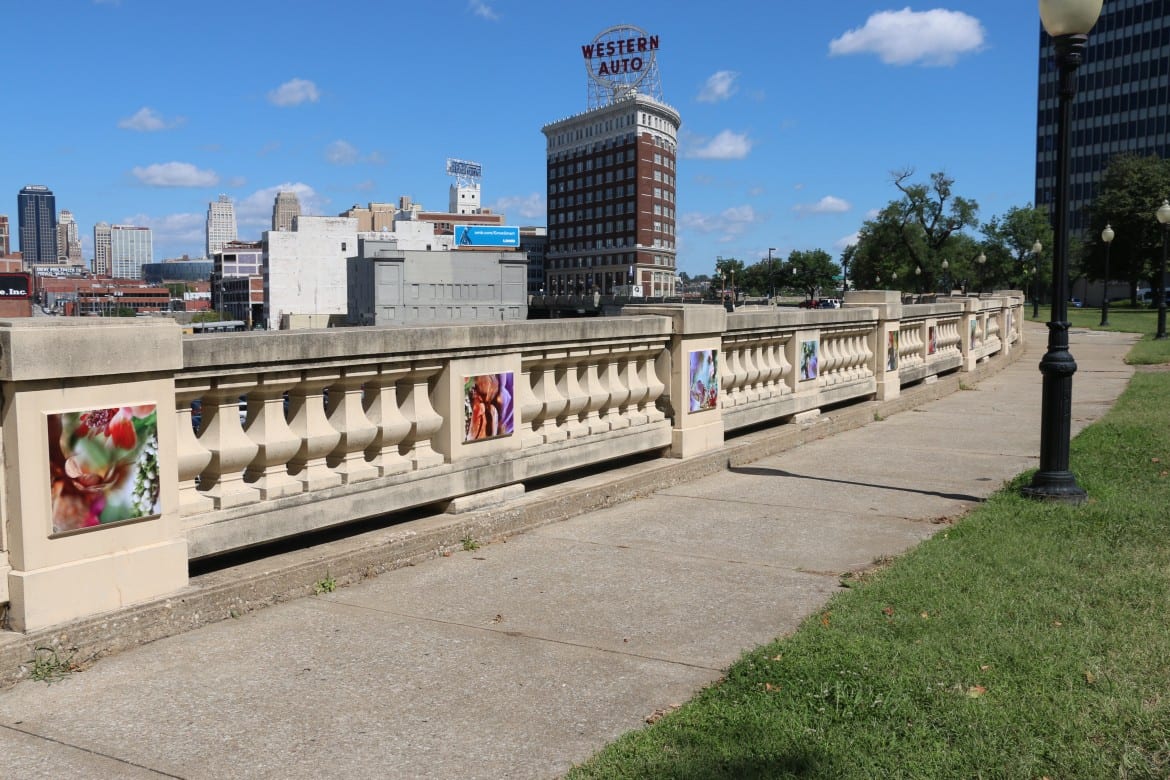 Kati Toivanen — “Working with Steve Plasper from Alpha Graphics, we came up with a method of printing with aluminum so we can respect the shape of the material that is already on the wall and then add to it with color. I wanted to bring color because there are not a lot of flowers in the park. I also wanted people to look into the beautiful skyline in the city as they look in that direction.”

Racing to Embrace Nature During the Pandemic

Folks Are Flocking State Parks and Other Sanctuaries