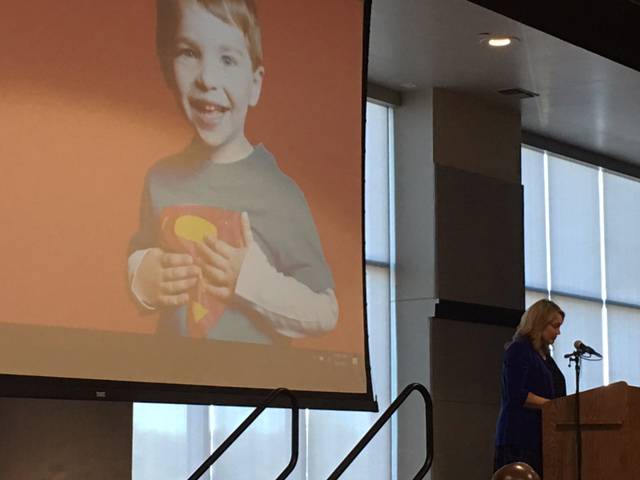 Part of Nicole Hockley is frozen in a world before Dec. 14, 2012, when her 6-year-old son Dylan would pretend he was a butterfly.

“He’s my beautiful baby boy with captivating eyes and infectious giggle and warm deep cuddles. He loved looking at the moon every night. He loved to eat garlic bread, and he liked to draw big dots for me every day with a purple marker,” she said. “He was just learning how to read and how to work the Velcro on his sneakers.”

The sweet memories are punctuated by a crippling reality, she told audience members Monday at the annual Heartland Coalition Against Gun Violence forum, which took place at the University of Missouri-Kansas City. On that December day nearly five years ago, Dylan was found wrapped in the protective arms of his Sandy Hook Elementary special education teacher. They were both shot to death. Dylan five times.

Gun violence confronts Americans every day, be it from mass shootings in Las Vegas and Lawrence — where three people were shot to death and two injured this month on Massachusetts Street — or the staggering homicide rate in Kansas City. The trauma also includes suicides, such as the one at Lee’s Summit North High School last month where a 17-year-old year girl took her own life in the school bathroom.

Hockley and Sandy Hook Promise, a non-profit organization established by several family members whose loved ones were killed in the school shooting, are hoping to end the polarizing debate of gun control versus gun freedom.

The organization is focusing on prevention strategies along with its previous mission of policy change. It means free training for teachers, students and many others to recognize the signs of gun violence.

“Nobody wants to lose someone in a senseless and horrific tragedy,” Hockley said. “Sadly, for most people, myself included, most of us only start to be active about an issue when it affects us directly.”

If These Wall Could Talk

“It’s affecting kids who don’t have visible wounds. Who weren’t shot themselves, who weren’t harmed themselves physically but harmed very much psychologically and emotionally and all too often permanently,” James said.

The discussion, he said, must include ways to address poverty, education and other problems that contribute to violence.

Homicides, suicides and non-fatal shootings leave behind families who often suffer lifetime trauma. Add suicides to the equation, and gun violence is taking a toll on the city’s neighborhoods, panelists agreed Monday. Consider the children without a parent or those who witnessed a death from gun violence.

One area of consensus was the need to restrict accessibility to the most vulnerable.

Cobbinah recounted a chilling case where a 5-year-old found a handgun on a kitchen counter while the adults were asleep. The child dropped the heavy weapon, and it discharged, killing a 3-year-old.

“Until we as responsible human beings take necessary actions to prevent incidents like that from happening they will continue,” Cobbinah said.

He wondered aloud why gun owners aren’t required to have insurance on guns much the same way that car owners must.

Better firearm storage is something panelists also agreed upon.

Research shows that many suicidal individuals decide and carry out the act within ten minutes or less. Having restricted access to guns could stop that impulse and make a dramatic difference, given that half of all suicides are carried out by gun, Sullivant said.

Sullivant, who proudly grew up shooting clay pigeons at her grandfather’s farm, noted how gun locks and safes could save a life.

“I’m not against guns,” she tells parents seeking her help at Children’s Mercy. “I’m against your son or your daughter having access to a gun when they are feeling desperate. And I think that’s very different. And I think it’s a message that most people can understand and get on board with.”

It’s a conversation that goes surprisingly well, she said.

Sullivant urges everyone to start talking about gun storage. It could be awkward, she agrees, but living with regret is worse. “This is a community conversation that I think we need to have with our neighbors and our churches and wherever we live. Wherever we live, we know people that could be affected by violence with guns.”

Douglass also suggested that gun violence is happening around us daily.

He took the job directing emergency services for the Shawnee Mission School District after his daughter demanded to know how he was going to protect his grandchildren after the Sandy Hook tragedy.

He’s revamped the department, bringing in tenured officers who are highly trained to look for signs of violence. Douglass said the district intercepts about 14 threats a year. Three of those were considered “stopped in place” attacks because the plan was well formulated.

Douglass told the crowd that he’d like to step up training for teachers and employees to look for signals. He expressed interest in the Sandy Hook program.

Hockley urged area schools, churches and parents to reach out to the non-profit agency for free help. Some tools are readily available online, she said. A PSA called “Evan” has already gotten significant attention even among trained professionals who thought they knew how to spot signs.

“Gun violence is not a hopeless issue in the United States and you are not helpless in preventing it,” Hockley said.

Hockley can never change what happened to Dylan.

“My beautiful butterfly is frozen in time. Forever 6. And a part of me is still frozen with him,” Hockley said.

But she hasn’t lost her fight to help others. Americans must choose to get involved, she said.

“Please don’t accept gun violence as a norm in America,” Hockley said. “Because what happened at Sandy Hook was preventable. What happened at San Bernardino, Aurora, Charleston, Overland Park, Fort Hood, Oak Creek, Orlando, Las Vegas — they were all preventable. My little boy deserved a safe school environment, and he deserved to live. And your children and grandchildren do too.”