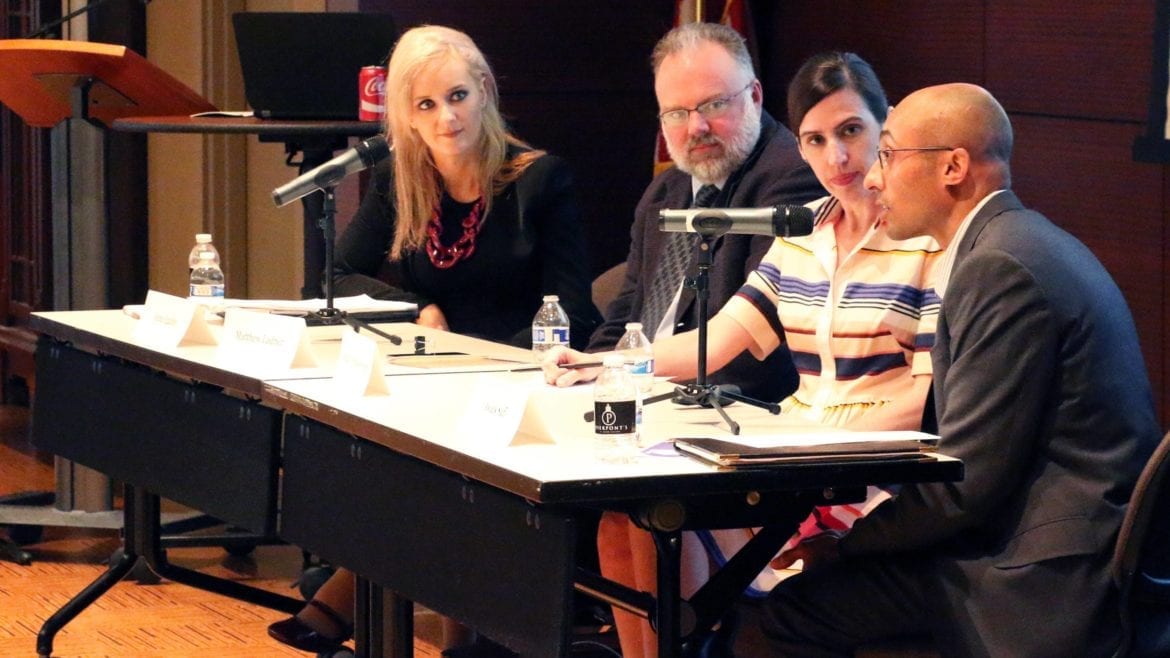 Few industry leaders want to point out why their great ideas ultimately fell flat. Jobs, grants, money and pride could be at stake.

But on Monday, national education leaders from across the ideological spectrum gathered at a Kansas City conference – “Eye on Education: Failures to Fixes” – to discuss flaws in charter schools, state voucher programs, teacher evaluations and even multi-million-dollar philanthropic ideas.

Ignoring failure ultimately hurts students, said Michael Q. McShane, director of education at the Show-Me-Institute, which sponsored the event along with the Kansas City Public Library and the University of Arkansas. The event was held at the Central Library in downtown Kansas City.

“We never learn from our mistakes,” McShane said.

Few scholars argued for abandoning any one strategy entirely, suggesting, instead, tweaks or new approaches.

“This isn’t meant to be some kind of global ruling on this. It’s to say that public policy is complicated, there’s lots of moving parts,” McShane said. “We have to be honest.”

Voucher programs and tax credit scholarships, which vary greatly from state to state, have failed to deliver significant academic improvements. One problem, she argued, is that private schools are not innovative.

“In many ways,” she said, “they’re replicating the structures and routines of a traditional public school.”

While other industries, including healthcare, have experienced far-reaching breakthroughs in the last half century, education has no analogous development.

Egalite argued that state voucher programs have flaws, including that education experts have failed to agree on a definitive price tag on the cost of educating a child.

Egalite argued that low-income families often lack a voice in crafting the voucher programs meant to help them. Some families find out that hidden fees at private schools make it unaffordable, even with a voucher. The program ends up being a disadvantage to the people who should support it the most.

“In the case of education, it is those in poverty who are least equipped to advocate for themselves if they’re being underserved,” Egalite said.

Yet Egalite believes education savings accounts could be a powerful tool to spur family-centered innovation and achievement.

Education savings accounts vary, but generally issue families a government authorized debit card. The card has public funds, but the money is managed privately by parents. Funds can be spent on tutors, specialized education therapy, private schools or any academic program that parents believe would fit their child’s needs.

The accounts, Egalite said, “pivot attention onto students and not institutions.”

The savings accounts, she said, could be weighted to promote equity for children that need more costly education.

Still, education savings accounts come with questions. Who should shoulder the burden of overseeing these programs, watching for fraud and providing accountability?

“Can you imagine being a college admissions director in 10 years if these programs take off? How are you going to weigh one’s transcripts over another?” Egalite said. “No kid will have the same transcript as another. So how do you weigh quality in that world?”

Still Egalite questioned what other program allows families to try revolutionary approaches and create the same sweeping changes that other industries have experienced.

“If we want to see major advances in education then policy will need to focus on promoting flexible and affordable and innovative opportunities that will advance not just excellence and not just equity, but all of these things,” Egalite said. “Done right – and that’s a big if – the (education savings accounts) do offer that hope.”

The forum featured 9 presenters who produced papers that will ultimately be combined in a book being published later this year.

See the video below to watch the entire panel discussion.

It allowed Matthew Ladner, senior research fellow at the Charles Koch Institute, a forum to suggest that the country might be over invested in “no excuses” charter schools.

Some of the most well-known charter schools use a no-excuses strategy, which generally emphasizes more traditional classroom approaches versus group work or student-led learning. The schools tend to have high academic standards, strict disciplinary codes, extended instructional time and targeted supports for low-performing students.

But you see “a strange set of disconnects” later on, he said, when things like college attendance, college graduation, and even non-cognitive measures, such as income level in their early career, do not correlate with those good test scores.

The research is not definitive, and more work needs to be done, he said, but it raises difficult questions. Do all kids benefit from this style or would they be better served from a variety of school choices that emphasize different character traits, he said. Diverse school choice options allow parents to pick the best choice for their child, he added.

Ladner pointed to the well-known book and movie, “The Blind Side,” which featured the story of Michael Oher, an African-American high school football player. NFL scouts tagged him as a starting player if he could make it to college, which he did, through supports that might not have been available in a rigid, no-excuses environment.

Ladner said his story shows that saturating the system with the no-excuses approach might stifle academic diversity that is vital to discovering student talents.

Ohler, he said, really needed a school with a strong athletic program to nurture his natural capabilities along with providing a good education.

Ladner, added, “What about the kid who was born to play piano? Does he need a no-excuses school? Maybe. Maybe not.”

The Koch Institute scholar questioned why some regions have become over-invested in such schools.

It is possible, he said, that the education community has underestimated the amount of instructional diversity that inner-city students need.