Ever Thought of It? Sidewalks Play Big Role in Community Health 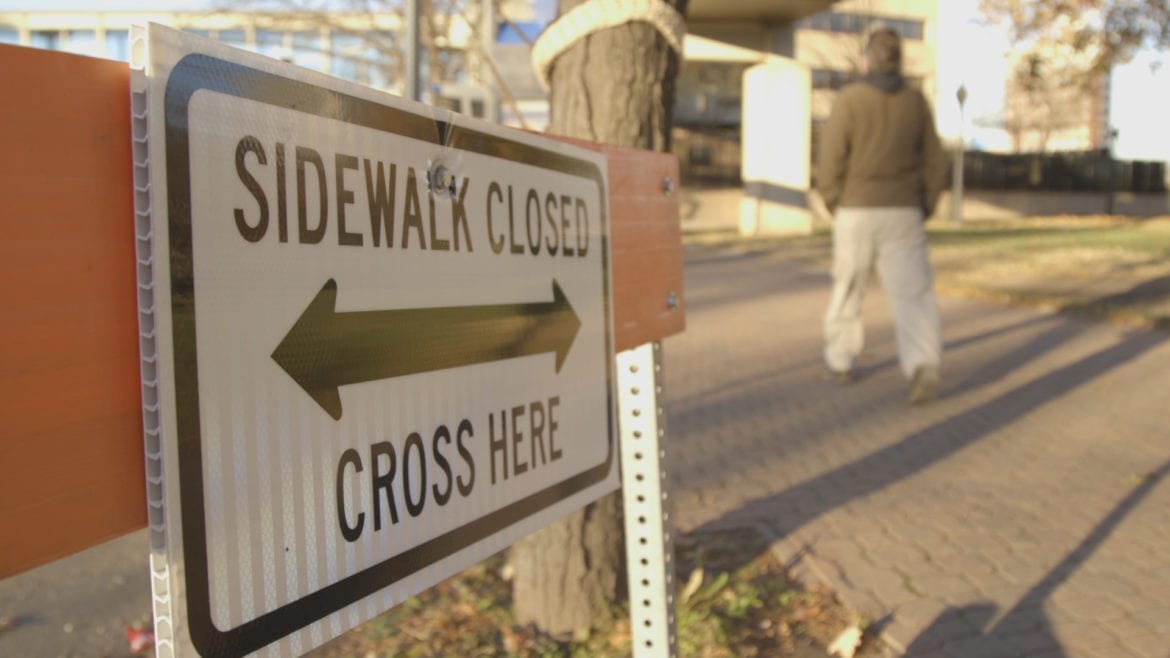 In neighborhoods in Kansas City, Missouri and Kansas City, Kansas, sidewalks are in disrepair. (John McGrath | Flatland)
Share this story

Let’s say you buy a new home in Kansas City, and several months later, the city blindsides you with a $4,000 bill for sidewalk repairs you knew nothing about.

“This isn’t fair,” the man complained to Wagner. “I told him, ‘Yeah, that stinks. That is why I am trying to change that.’”

And that change could come Tuesday, depending upon the outcome of the city’s bond election, where one of three related ballot questions includes $150 million for sidewalk repair and maintenance.

Voter approval of the measure would shift sidewalk funding away from individual property assessments — which means the repair costs now lie with the homeowner — to a dedicated funding stream from the city. The city would, however, raise property taxes to help pay off the general obligation, or GO, bonds.

The broader issue — emphasized by health advocates on both sides of the state line — is that safe places to walk improve residents’ health and well-being. Sidewalks can be particularly important in low-income neighborhoods, such as the East Side of Kansas City, Missouri, allowing for exercise in areas where diabetes and other chronic diseases are often endemic.

The Way It is Now

The city’s current sidewalk-repair program has two related weaknesses: it’s a complaint driven system, and in many cases, the complainant is putting themselves on the hook for costly repairs. Even worse, if someone else carps to the city about the sidewalk in front of your house, you are still obligated to pay for the fix. Some facts and figures about city’s sidewalks and its repair program:

Repairs are currently financed by the assessments collected each year, which can be as much as $2.5 million, but that is a drop in the bucket compared with the backlog of work and the additional problems being reported all the time.

“You do the math, and you are behind,” City Councilman Scott Wagner said, “and you are always behind.”

Should the sidewalk money come through on the GO bond, Wagner envisions a systematic program that inspects about 10 percent of the sidewalks annually and prioritizes repairs.

Much of the first-year money would be dedicated to clearing the backlog of existing projects. Wagner also expects the city will have to contend with a bubble of newly reported problems, once people realize they won’t have to pay for the work.

In a resolution passed Thursday, the city council directed the city manager to develop a “Citywide Sidewalk Inventory and Condition Assessment” and to take several other related steps, including developing guidelines to integrate sidewalks into other infrastructure replacement projects, such as water main repairs.
As detailed in an accompanying plan, the council said the inventory and assessment plan should prioritize work based on public safety, the needs of people with limited mobility, and on improved access to: public transportation, schools, commercial districts and/or job centers, grocery stores, neighborhood centers, parks, and hospitals or medical centers. Low-income neighborhoods would also receive special attention.

Those priorities, Wagner argued, should rebalance the system toward the city’s poorer sections, correcting the present system that is skewed toward wealthier residents who can afford to pay for the repairs.
“There is no doubt in my mind the East Side is is going to get a significant amount of work on sidewalks sooner rather than later under this plan,” Wagner said. “That is not to say the Northland or way to the south won’t get those dollars, but there is going to be a lot of high priorities set on the East Side when you throw all of those things together.”

Despite that argument, representatives of the black community, including the political group, Freedom Inc., oppose the city’s bond issue proposal because of the tax increases involved.

Other critics include the group Citizens for Responsible Government, which opposes the entirety of the GO bond package, which would also include money for roads, bridges, flood control, and other infrastructure needs. Dan Coffey is a spokesman for the group, and he predicted a hornet’s nest of protest among folks left off the sidewalk repair list.

Similarly, he knows some taxpayers are angry that the city is offering a solution that was unavailable to them.

“I’ve got people who have told me they have paid $9,000 dollars to get their sidewalks replaced,” Coffey said, “and they don’t think this is a bit fair for the city to do this now, all of the sudden.”

When neighborhood sidewalks are repaired by the city, the homeowner is responsible for those repair costs. Homeowners can pay off the assessment within 60 days, or agree to a 15-year payment plan. This visualization uses ZIP codes to compare what happens after those repairs are made. For example, 15 properties in the 64130 ZIP code are current with their payments to the city for completed sidewalk repair (left side). The same ZIP code shows 43 properties are behind payment schedule — and have been turned over to collection agencies — for completed sidewalk repair (right side). Alternatively, the 64113 ZIP code shows 87 properties are current in paying back the city for repair costs (left), with 13 properties in collections (right).

Coffey also criticized the tax increase, arguing the city could have chosen a different financing mechanism that did not rely on property taxes. He also said the city should consider selling some assets to raise capital.

Eric Bunch is on the opposite side of the issue as policy director for the nonprofit, BikeWalkKC, which works to make the metropolitan area a place that encourages active living. In fact, the group has spent the last year working with other organizations to compile a Kansas City sidewalks master plan.

Modern sidewalks are important for more than just physical activity, he said, when you take into account people with disabilities. He said Kansas City has 2,000 curb corners that don’t have ADA-accessible ramps.

Bunch applauded the city for making sidewalks a priority, but the master plan recommends that policymakers explore all types of funding options, given that the unmet need even exceeds the sums that would be earmarked through the GO bonds.

It would be wonderful if everyone could take sidewalks for granted. “It should be just a regular part of everyone’s daily lives,” Bunch said, “having a nice, high-quality sidewalk that gets them to their kids’ school, or gets them to the nearest grocery story, or just gets them around the neighborhood to walk their dog.”

Other Side of Town

Just like BikeWalkKC, organizations in Kansas City, Kansas, have talked for years about the crucial role that the “built environment” plays in residents’ health.

That has been a significant focus of Healthy Communities Wyandotte, an initiative that has worked to improve “The Dotte’s” poor showing in annual county health rankings produced by the Robert Wood Johnson Foundation and the University of Wisconsin Population Health Institute.

The 2017 results came out Wednesday, and Wyandotte County climbed out of the cellar among Kansas counties, though still ranking next to last out of 102 counties.

Broderick Crawford knows the sidewalk issue well, remembering his confusion at the University of Kansas in Lawrence when he received sideways glances when walking in the street. That’s just how he did it growing up in Kansas City, Kansas, because the sidewalks were unwalkable.

And they’re still that way in many KCK neighborhoods, said Crawford, now the executive director of NBC Community Development Corporation, a branch of the New Bethel Church in Wyandotte County.

Without walkable sidewalks, Crawford said, communities are more isolated, less active, and lack a sense of community pride and connectedness. And in an area like Wyandotte County, where a third of residents don’t own a vehicle, walkability is even more essential.

The Unified Government of Wyandotte County and Kansas City, Kansas, pays half the cost of repairing sidewalks, though many residents still can’t afford their half.

Wyandotte County does not lack parks or green space, said John Hornbeck, project manager for 20|20|20 Movement, whose goal is to expand trails, sidewalks and biking routes in the county. The problem, he said, is a lack of usable sidewalks to get there.

“You become conditioned to life in that neighborhood because that’s all you know,” Crawford said. “When they do, they become angry — ‘Why are (other neighborhoods) treated better than I am?’ Anger plays itself out in different ways, sometimes its violence and sometimes it’s crime.”

Hornbeck doubted that KCK will embark as anything as ambitious as the GO bonds in KCMO, but he insisted that government and neighborhood leaders agree that funding must be found.

“What has changed recently is the recognition,” he said. “It’s not a new problem. It’s a newly recognized priority.”