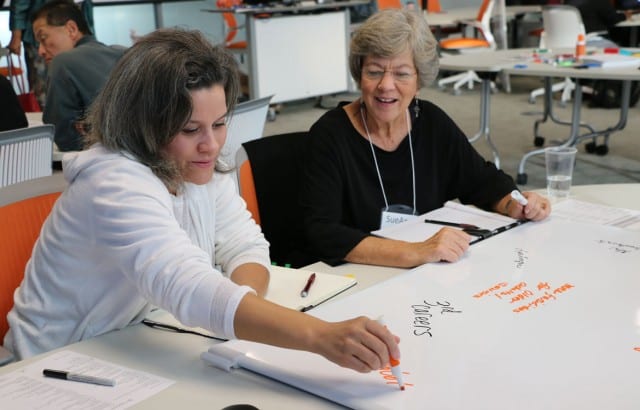 Selina ONeal and SueAnn Strom write down their ideas at the workshop for aging and innovation.

One in five Americans will be age 65 or older by the year 2030, according to the Census Bureau. As the baby boomers age, the question arises: How will we deal with this aging population?

A group of students and faculty at UMKC is taking a look at this question. Kelli Wright, co-director of the Consortium for Aging in Community at UMKC, was one of the organizers of the Workshop on Aging and Innovation on Friday and Saturday, Oct. 17–18. One of the goals of the workshop, Wright said, is to create actionable solutions to problems facing the rapidly aging population.

“You hear a lot of places talking about our population getting older, but there isn’t a lot of action around that. It’s still largely ignored,” she said.

The workshop brings UMKC students together with faculty and older adults from the community. Wright said she thinks younger people are wrong to think that aging does not affect them. In fact, since there are more millennials than baby boomers, they will account for an even bigger wave when they age.

“Many of our students are millennials,” she said. “They actually will represent the largest cohort of aging that we’ve ever known. We often talk about the boomers, but really it’s the millennials that will age the population in the United States and worldwide tremendously.”

Retired English professor Cecelia Robinson said she came to the workshop because she realized she has never planned what her life will be like as she gets older.

The two-day workshop began with a brainstorming session to identify problems facing older adults. John Norton is the managing director at the Regnier Institute for Entrepreneurship and Innovation and one of the organizers of the event.

“Ideas and problems are everywhere. All you have to do is walk around and see what makes you mad,” he said.

The problems brought to the table ranged from medical technology to senior entrepreneurs to health care costs and older adults’ financial needs. 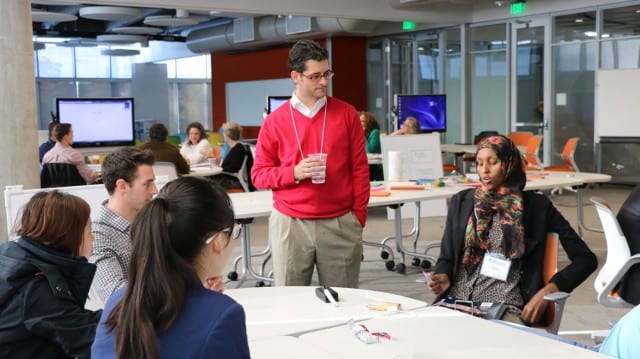 Students, UMKC faculty, and community members attended the workshop on aging and innovation.

Over the workshop’s two days, participants will break into teams and create actionable solutions for the problems they identified. Each team consists of students, faculty members, and community members. No two people from the same college at UMKC were allowed on the same team. Wright said the idea was to promote diversity of thought.

“We need to think complexly about it,” she said. “There is no one discipline that can answer the needs of aging, there is no one field that can address those needs and those opportunities.”

Norton said teams will ideally be able to take their ideas into further stages of ideation and execution through other resources at the UMKC, such as the E-scholars program at the Bloch School of Management.

Does a New Apartment Project Mean New Life in Argentine?

WyCo's 'Day of the Dead' Brings Tradition to Life