Two WWII Army Buddies Have One Last Reunion on 'the Internets' 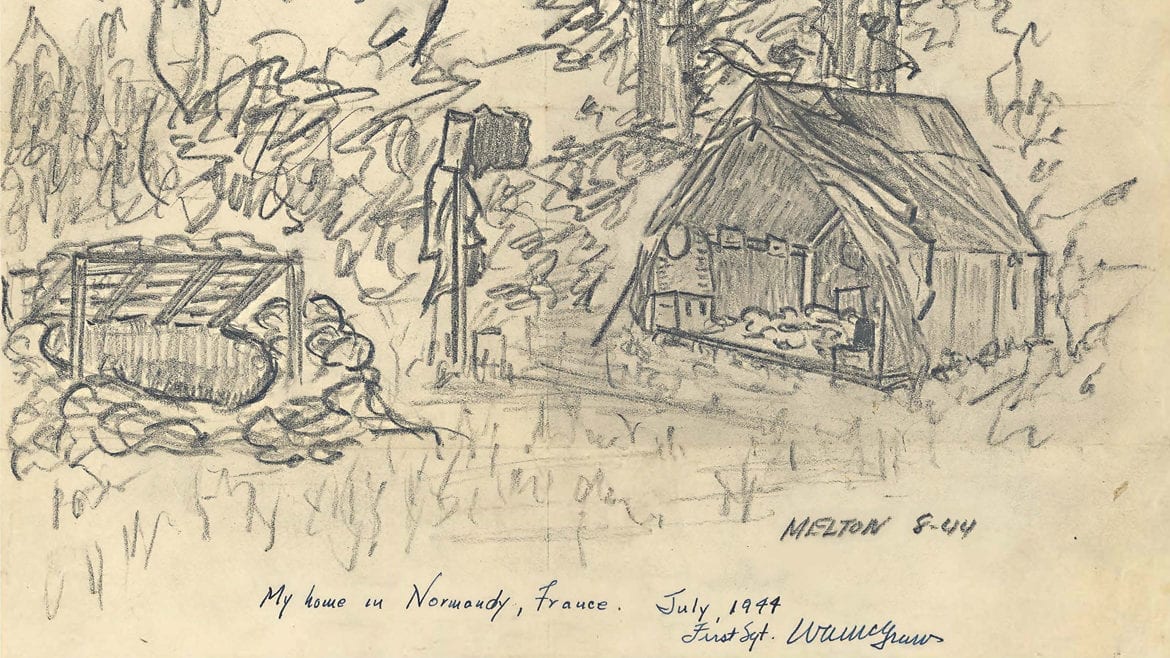 “My home in Normandy, France. July, 1944,” wrote 1st Sgt. William “Bill” McGraw. It’s signed “Melton 8-44.” A few weeks ago, in a testament to the power of social media, one man reunited a WWII soldier’s picture with his family. It belonged to Flatland reporter Mike McGraw. In return, perhaps we can reunite this sketch of the campsite, found in Sgt. McGraw's letters home, with the family of the artist. The only Melton listed in the 689th company roster is John R. Melton of Huntington, West Virginia. (Courtesy: The McGraw family)
Share this story

The 70-year-old photo, discovered behind an old kitchen cabinet in Huntington, West Virginia, held tightly to its secrets; only the barest of clues were etched on the back in pristine penmanship.

It’s a man in uniform, highly posed, perhaps in his mid-20s, holding a pipe to his mouth. He would be well into his 90s by now, but at the time it was taken in 1945, as one observer said later, he looked like “a stone-cold badass.”

The picture might well have ended up in the trash had it not been for the kindness and curiosity of an Ashland, Kentucky, electrician named Aaron Matthews and the invention of what George W. Bush called “the Internets.”

Matthews, who is fascinated with all things World War II, found the photo so “astoundingly intriguing” that he posted it on his Facebook page and asked for help finding its rightful owners.

And while the posting didn’t exactly go viral, it was shared more than 700 times.

The mystery was solved in a matter of hours with a simple Google search by one of those friends of a friend of a friend.

It’s a photo of my late father.

How it found me so quickly is a testament to the sheer power of social media.

What my father’s picture was doing on the wall of a West Virginia apartment, well, that’s another story altogether.

A story about how World War II united a nation long before Facebook founder Mark Zuckerberg became a billionaire by doing it virtually. 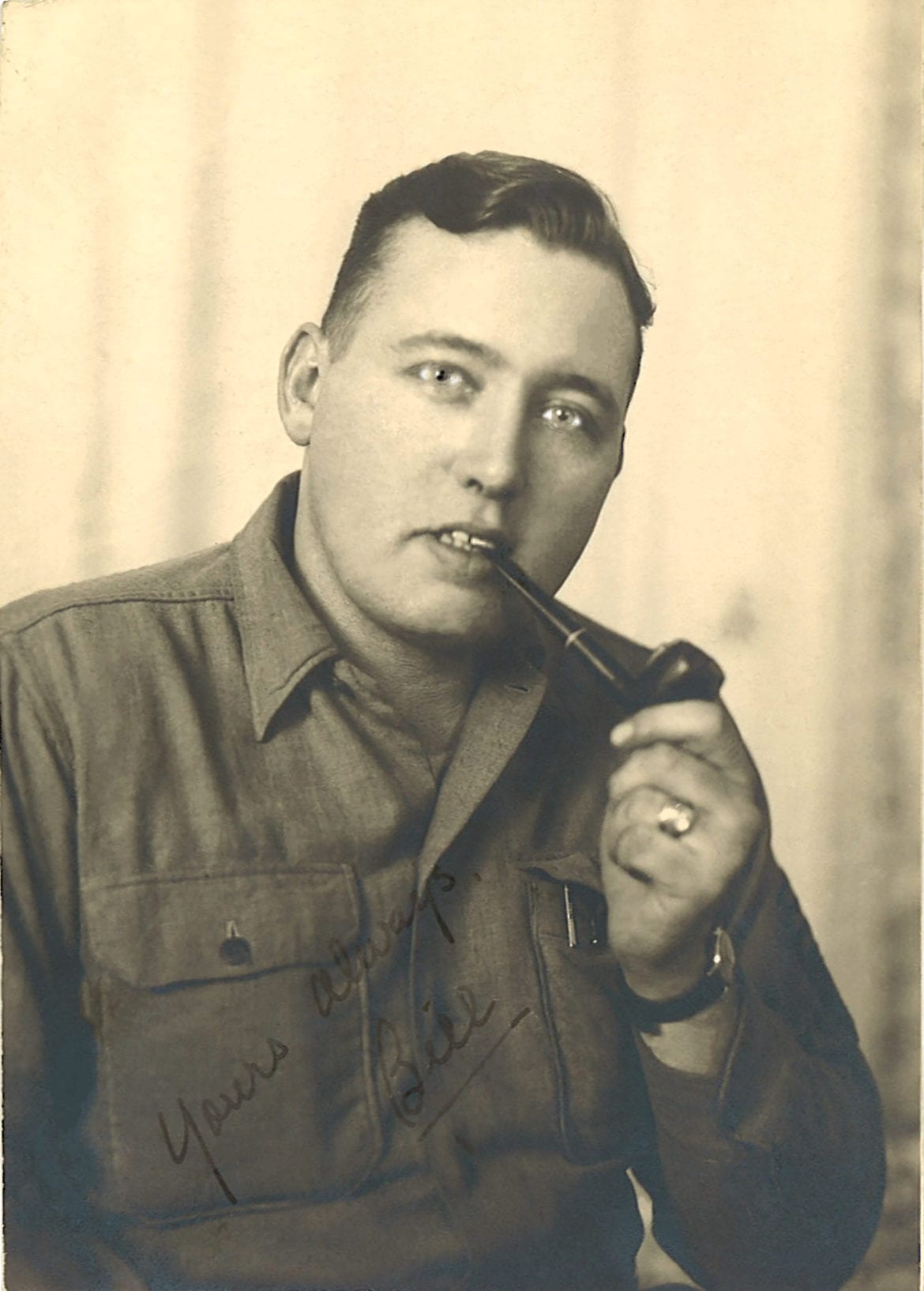 It started a few months ago with a story I wrote about the 372 wartime letters my father, William A. “Bill” McGraw, sent home to my mother in Kansas City during the Allied march across Europe to defeat the Nazis.

He served with the 689th Army Ordnance Company. It was his job, and that of his men, to keep ammunition flowing to the front.

They did their part to help the Allies expend that ammunition at the rate of 2 tons a minute, including 500 million machine gun bullets and 23 million artillery rounds.

All the while the 689th — laden with explosives of its own — dodged machine gun fire and bombs from enemy planes, not to mention friendly flack. At one point the company lost five men, killed in a premature explosion while cleaning up a captured Nazi ammo dump.

Those kinds of experiences make for strong bonds, such as the one discovered behind the cabinet in Huntington.

Electrician and Facebook maven Matthews says he has long been fascinated by the Second War’s “ability to bring the world together.”

And so was my father, who often wrote about how the fight against fascism connected millions of Americans who would never have known one another had it not been for the war.

“I am in a tent with 4 other fellows, who are really fine chaps,” he wrote on Dec. 2, 1942, from Camp Sutton, North Carolina. “Warren Coleman is a red-headed staff sergeant from Boston who really has the Boston ‘back bay’ accent. Little Freddie Lucas is a 5th grade technician … from New Haven, Ct. Frank Wholy is a 6’ 3” corporal from Pittsburgh and is the riot of the tent … they are all ‘tops.’”

As the “topkick,” or first sergeant of the 689th, my father worried constantly about “his boys.” As he once wrote to my mother, “gosh a topkick has to be mother, father and nursemaid to some of these guys.”

Even though he was 13 years older than my dad, one of those “boys,” with whom he would maintain a lifelong connection, was Staff Sgt. Darrell Fisher of Huntington, West Virginia.

Matthews found it while doing rehab work in what we now know was an apartment at 1066 Euclid Place that Fisher and his wife shared in Huntington.

News of the find came to me May 6 after a woman in Carteret County, North Carolina, who had a connection to Mathews’ Facebook friends, shared it with another friend.

That friend, Joyce Veltman, simply Googled the few clues on the back of the photo and quickly connected it to the story I had written in October.

“The way I located your story,” Veltman told me by email, “was I Googled the following: ‘WWII+689 Ord Amm Co+France.’”

“Your article was the first result. After I read and saw the photos on your article, all I did was Google you and came up with a possible work location and sent an email. … It took less than five minutes total.”

As for Sgt. Fisher, we don’t know a whole lot about him, other than that he outlived my father by a few years, having died childless at age 87 on April 26, 1993. Another weird connection? He died on my birthday.

Combing back through my father’s letters, we also know that Sgt. Fisher took ill on Jan. 10, 1945, while the 689th was still in France:

“Sgt. Fisher is sick in bed with a cold today,” my father wrote. “In a way I’m kinda glad Fisher isn’t feeling quite up to par as it gives him a chance to get some much needed time off. He has certainly been doing a swell job and I would be utterly lost without him.”

We also know that a few months later, on April 10, 1945, shortly after the 689th entered Germany, Sgt. Fisher “walked over to the 2nd Platoon to get a hot bath.”

And thanks to another more recent photo Dad left behind, we know Fisher was probably active in planning postwar reunions for the 689th. Six of those reunions were held in Huntington.

The Internet loves a mystery, and its amateur detectives have solved many that are much more meaningful than this one.

As actor Kevin Bacon noted in a recent Ted Talk, “the Internet is the most powerful force for the connectivity of people, and we have to keep using it as a force for good.”

And Bacon should know. During the earliest days of the Internet, Bacon’s name got attached to a decades-old theory called Six Degrees of Separation that has become a catchphrase for describing human interconnectivity. Each person is just six acquaintances — or fewer — removed from each other.

Both Bacon and our Kentucky electrician Matthews have found ways to use that connectivity for good.

As for Matthews, he turned “the Internets” into a virtual soldier’s heaven.

He made it a place where long-lost Army buddies — one at the End of the Trail Cemetery in Clintonville, West Virginia, and the other reposing under a birch tree in Mount Washington Cemetery in Independence, Missouri — can have one last reunion. 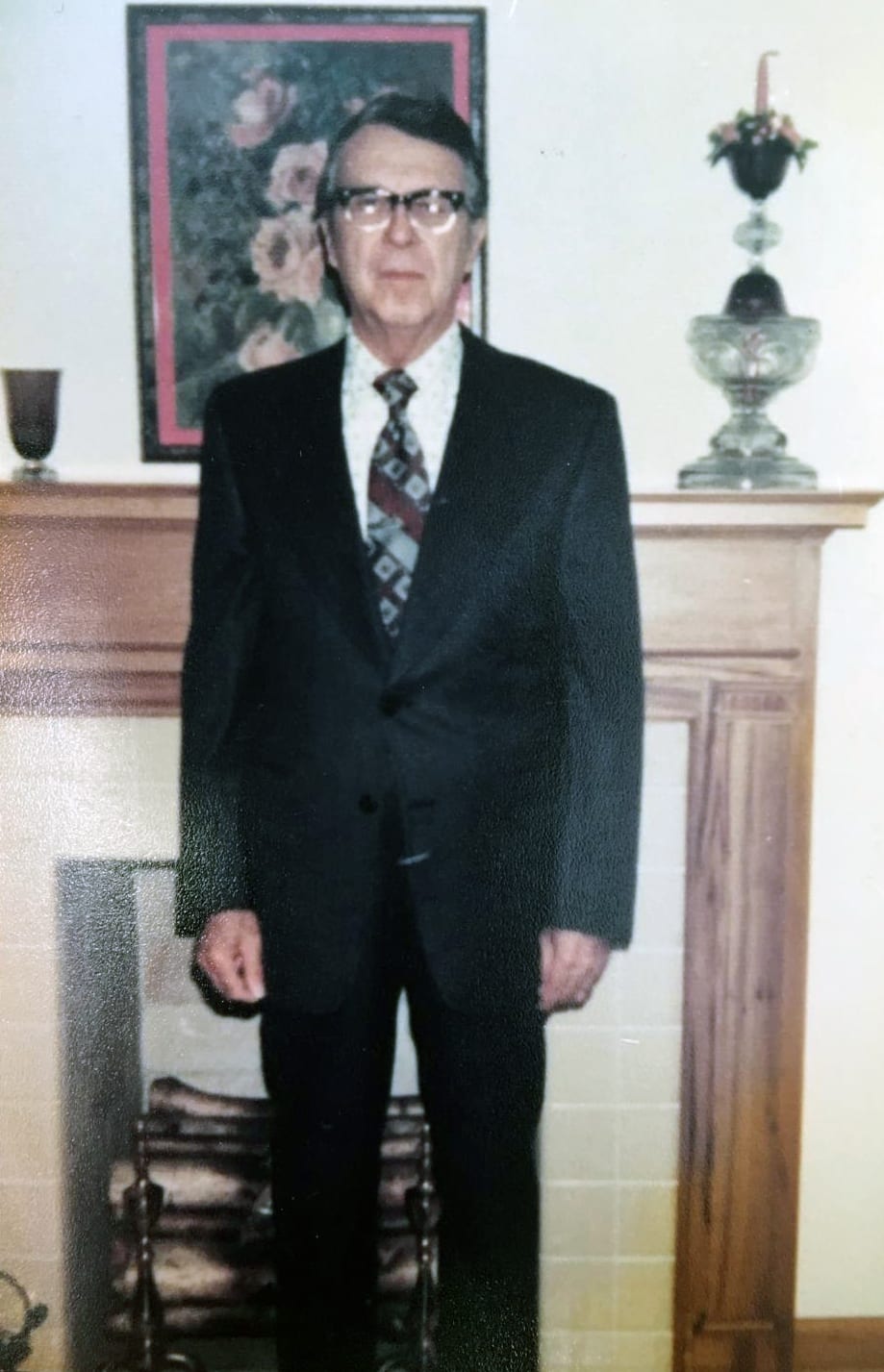 — Mike McGraw is a special projects reporter for the Hale Center for Journalism, which publishes to Flatland. He can be reached at mmcgraw@kcpt.org.