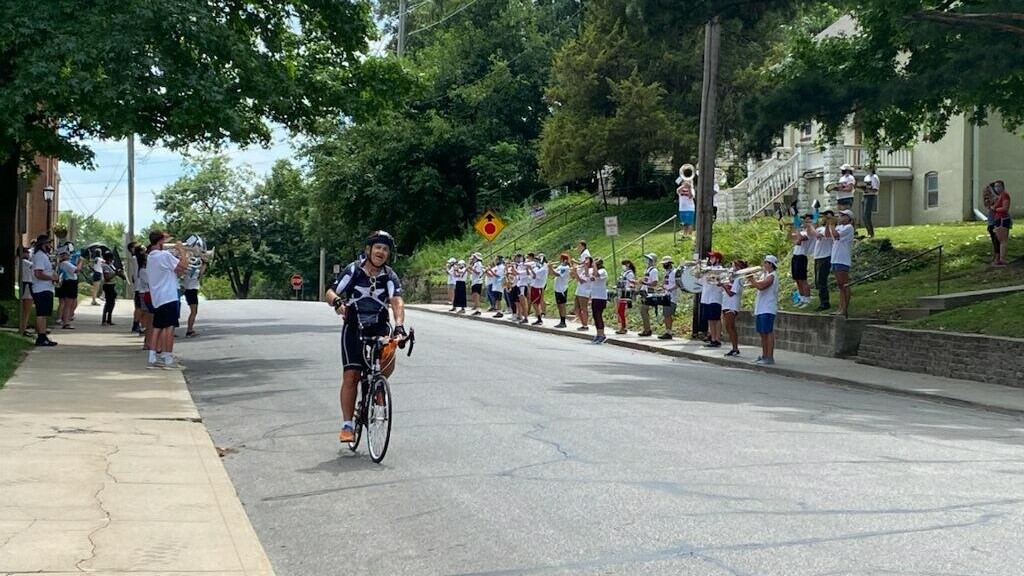 Spending a birthday relaxing by the pool with a drink in your hand, reveling in a hard-earned retirement? Not for Tom McGuire.

McGuire opted to spend his 69th birthday earlier this week biking 69 miles to his alma mater, Benedictine College in Atchison, Kansas, where he started in 1969.

McGuire started cycling in college. In those days he biked between the college’s two campuses because he didn’t have a car. Now he bikes for exercise to limit the impact on his knees.

His sister has been biking her age for several years now, and McGuire thought that this year he would finally join her. When he realized the mileage from his house in Overland Park to his college matched his age, he figured it was meant to be.

McGuire’s wife Teri and several of their 10 grandchildren met him in multiple places along his route on Tuesday.

“They’ll provide me some support, and hopefully water,” McGuire said.

On Monday, McGuire packed up everything he would need to finish the ride, as well as some memorabilia. Among other things, he packed the scapular he wore every day in college. He held onto it for decades, and it accompanied him back to Benedictine on Tuesday.

McGuire said that the key to finishing a long ride is knowing where your end point is. Knowing where his route ended, and that his family would be waiting for him there, kept him motivated.

What he didn’t know was that the school band would also be waiting for him at the entrance, ready to welcome him to his alma mater with a celebratory song and his favorite drink — a caffeine-free Diet Coke.

Amid all the uncertainty of this moment, McGuire has a simple piece of advice. (See the attached video for more sage observations.)

“In today’s time with COVID you want to live a day at a time,” he said. “Try to enjoy what you have, knowing that others don’t have the same.”

This week, McGuire went the distance.

Catherine Hoffman reports for Kansas City PBS in cooperation with Report for America.