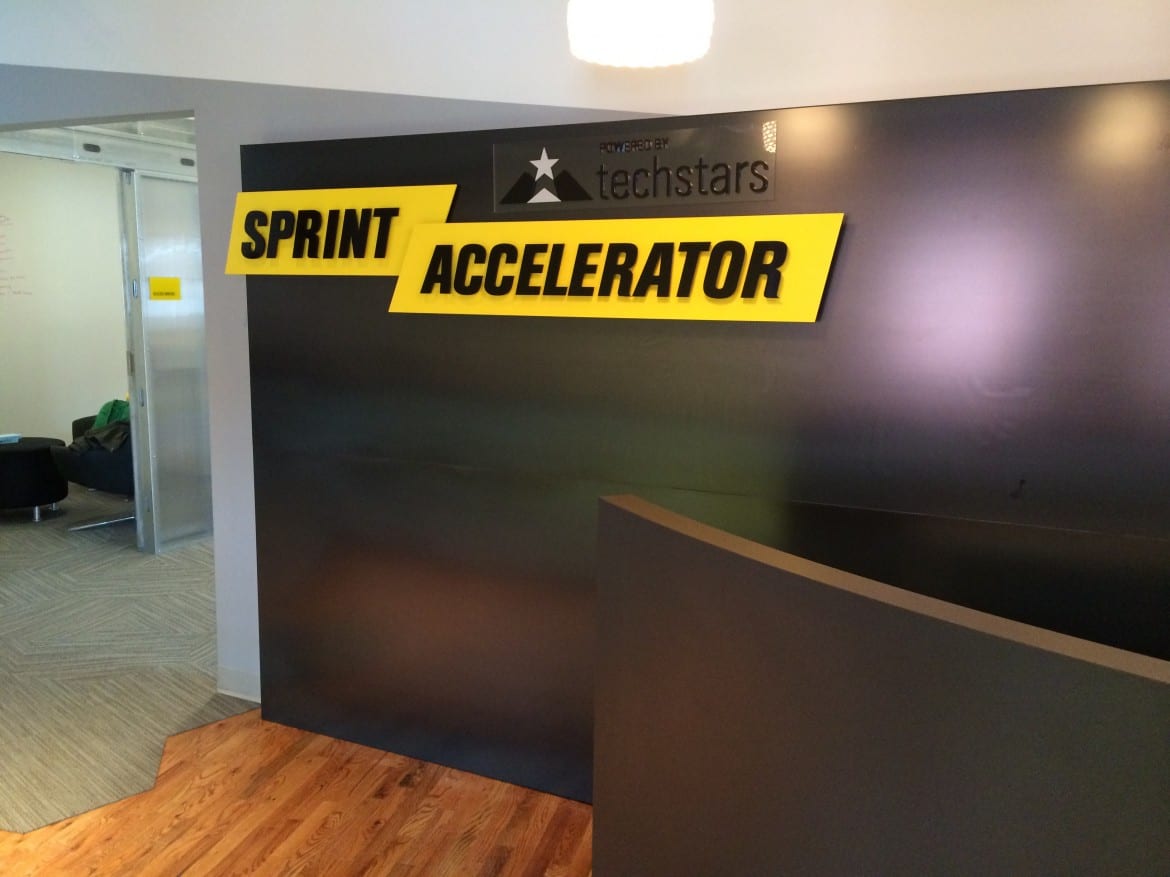 The atmosphere at Techstars’ mobile health accelerator at the Sprint Accelerator is similar to other startup environments: some people are working intently with their headphones on, while others are goofing off. There are snack wrappers and cans of Redbull everywhere. Individual team members are off to the side filming testimonial for Sprint. A few people lounge in the beanbag room and doodle on the whiteboard walls. When the need for a break strikes, accelerator participants can blow off some steam on the indoor shuffleboard court. For the most part, however, all the teams are hard at work on their mobile health apps and devices.

Techstars is a startup accelerator that provides seed funding and mentorship from industry experts to participating startup businesses. At the end of the three-month program, participants have just five minutes to pitch their companies to a crowd of investors on “Demo Day,” June 12. Alisha Templeton, Techstars’ project manager at the Sprint Accelerator, said this Demo Day will hopefully result in funding for all 10 teams.

“Overall stats show that 9-in-10 startups fail, but (through) Techstars… actually the results are the opposite,” she said.

Templeton said Techstars attributes much of the program’s success to the mentor network. Mentors include experts from the tech, health and business sectors.

James Sajor is one participant that appreciates the accelerator’s mentorship opportunities. He is chief operating officer at Sickweather, an app that maps and forecasts sickness using aggregated social media posts. Sickweather uses patent-pending algorithms that can distinguish between a high fever and “Justin Bieber fever,” CEO Graham Dodge said. Sajor has enjoyed picking the mentors’ minds during brainstorming sessions.

“Sometimes managing a startup is like piloting a crashing plane,” he said. “We could read 1,000 books, but instead we are using the experience of the mentors.”

While the accelerator program is only three months long, it is an intense few months, Templeton said. The Techstars motto is to “do more faster,” which participant Will Imholte said is absolutely valid. Imholte and the rest of his team have moved their company, Prime, to KC from California for the duration of the accelerator.

“We can get more done in a day here than we could in a week in San Francisco,” Imholte said.

Prime is an app that aggregates users’ medical records from various providers into one location. This model works well for sufferers of chronic illness who often see multiple doctors, sometimes in the same week. Users can also share records with family and message back and forth about test results, for example, within the app.

Prime is not the only team to move to Kansas City for the accelerator — in fact, all 10 teams did. One company, Lifeline Response, which uses an app to disrupt and prevent sexual assaults, has already hired a local intern, and many teams are looking to hire local talent. Teams cited the incredible opportunities afforded by Techstars when asked about the temporary move.

One of the well-used whiteboard walls in the Sprint Accelerator space. (photo by Caitlin Cress/Hale Center for Journalism)

Ron Davis, CEO of Tenacity, and his wife are making huge sacrifices for the sake of the company. While Davis works in KC, his wife is in her first year of medical internship in their home town of Seattle. She is also caring for their 21-month-old child.

“We’re bleeding for this,” Davis said.

He agrees with his peers, though: the mentorship makes the sacrifice worth it.

“The mentoring is a concentration of brilliant, successful people,” he said. “It’s really something.”

Davis’ company, Tenacity, is a peer coaching wellness platform in the corporate wellness sector. Its model is based on peer encouragement and accountability. The business model functions around a corporation funding the use of the app for its employees. Users are rewarded with Amazon giftcards when their accountability buddies improve upon their average fitness scores. The app uses smartphone accelerometers to track duration and intensity of movement. Eventually, the app will work with external fitness trackers like the Fitbit and Jawbone’s Up band.

By rewarding users based on improvement, Tenacity encourages even the most inexperienced users. Davis said encouragement via messages and tweets from peers is important, but not the most effective aspect of the app.

“Reminders are important, but it’s more important that friends are in the game,” he said. “Felt social pressure works.”

Davis believes this peer pressure can lead to real change in the user, rather than a temporary improvement based on a motivational tweet.

“Behavior change (of the user) is better,” he said. “It’s stickier.”

David Voran, Sprint Accelerator mentor, physician at Heartland Health and assistant professor at Truman Medical Center, thinks apps and devices that engage the competitive nature of the user, like Tenacity, are a huge part of the future of health. He referred to this as “the game-ification of health.”

The market is already full of such products: The Eatery app scores users’ meals based on user feedback on a photo of the meal, wearable fitness trackers like the Jawbone Up band track everything from steps taken to hours spent in REM sleep.

Wayne Carter, president and CEO at the Kansas City Area Life Sciences Institute and Sprint Accelerator mentor, believes this accumulation of data is crucial to health and wellness. Wearable fitness trackers passively track objective data rather than relying on users to enter information that they have subjectively (and often incorrectly) gathered.

The developers of apps and devices encourage continual use by rewarding users for meeting accumulated data goals.

The Fitbit family of trackers all reward users with milestone badges. Users start with a 50 mile badge and can work their way to 1,000 and 3,000  mile badges.

The cumulative nature of these badges definitely motivates users, but also encourages brand loyalty. Voran said the prospect of losing accumulated data has prevented him from switching from a Fitbit tracker to a different brand, even if the Nike Fuelband, for example, may provide features he is interested in.

“If I have to start all over from scratch, then I’m not very interested in going to that new device,” Voran said.

The personal data tracking market is constantly changing. Trackers have evolved from glorified pedometers to information-generation powerhouses. Many users, like Voran, use more than one information-tracking device or product. He uses a Fitbit and a Withings blood pressure cuff and scale, all of which sync to his iPhone.

Fitbark tracks the family dog’s daily steps and hours of sleep, but also encourages family members to share photos and memories about the dog to create a full picture of the pet.

Akibah’s hardware is designed to change the way diabetics track and manage their blood sugar levels by shrinking a glucometer case to an iPhone case attachment. The company’s name comes from a Swahili proverb “akiba haiozi,” which means that a person with foresight will always know prosperity. CEO Haroon Ismail said diabetics will be able to use the precise data Akibah collects to understand how their decisions will impact their future health “prosperity.”

Ollo Mobile uses voice-activated cell phones to allow seniors continual access to their families and emergency services. The wearable phones also track movement, which means that the phone can call for help if a fall is detected or if a senior loved one seems to be straying from an established routine.

Carter is a strong proponent of health care apps like those being developed at the Sprint Accelerator.

Related links:
Why I gave up counting calories with Fitbit
Chatting my way to 10,000 steps 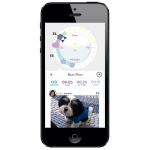 A screenshot of the forthcoming Fitbark app, courtesy of Fitbark.

This screenshot from the Lifeline Reponse app shows the options provided to users once their lifelines are activated.

Medicast plans to be active in the KC area by summer. Until then, the Medicast app recommends local urgent care facilities.

This screencap from the Ollo Mobile website shows its app tracking the movement on a user. The mobile phone is pictured on the left.

In this screenshot from the Prime app, a mock user shares her health info with family.

A live screenshot of the Kansas City area in the Sickweather app, available in the app store.

How can gigabit internet be used in healthcare?