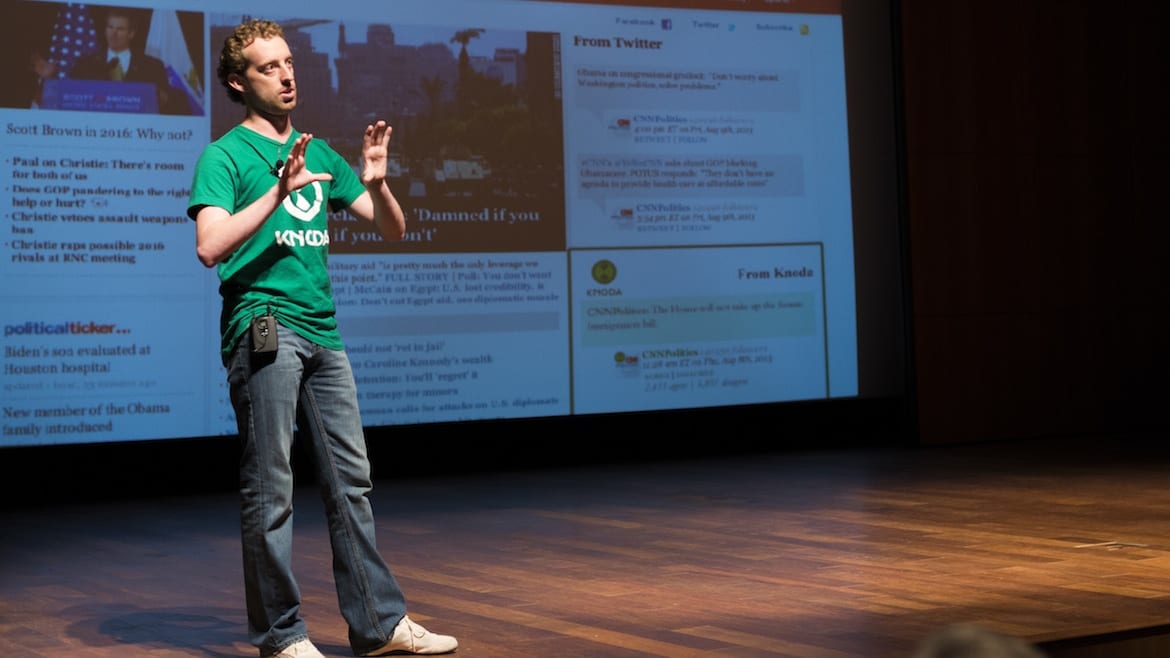 Kyle Rogers is the co-founder and CEO of Knoda, a prediction tracking application, and a graduate from the inaugural class of the Spark Lab KC accelerator program.

Who is Kyle Rogers?

“I’m a huge sports fan and a big nerd. I’m pretty much always on my computer or my smartphone. I played almost every sport available to me growing up, including volleyball. I used to work at Sporting KC and am now a season ticket holder, so I’m a big soccer guy. I like almost any kind of music from Arctic Monkeys to Katy Perry.”

What is your role at Knoda, and what does that entail?

“I’m a co-founder and nominally the CEO, though titles don’t really mean anything in a young company like Knoda. Things I focus more time on than others: Anything legal-related, PR/communications, partnerships, fundraising (when that is switched on). Things we all focus on all the time: how do we make the user experience as intuitive and fun as possible? How do we get as many users as possible?”

What brought you to work in this field?

“I love the idea of creating something that didn’t previously exist and working with really smart people to build something fun. I’ve always tried out new technologies, including social media, and I had this idea for a prediction tracking system so you could tell your friends ‘I told you so’ when you were right. I always looked for something like that and never found it, so eventually my co-founder James and I decided to give Knoda a shot.”

What is the biggest obstacle that you have dealt with in your field?

“As a consumer application, our biggest obstacle will always be finding more and more users. That’s what we all think about constantly every day. We’re young enough that we don’t have to try and make money yet (we have a plan for how to do so eventually), so figuring out what motivates people to make predictions and how to build that into the product are the big challenge. Later on, those things might change.”

What is the most exciting part of your work?

“Working with really smart people to build something that didn’t previously exist. It’s so cool when we are testing out a new feature and something that was just a conversation topic two weeks earlier is now living and breathing on our phones.”

What should we expect to see from you in the near future?

“In the immediate future, Knoda users will be able to make private groups so they can predict with their friends without anyone else seeing it. That is going to be really fun. Long term, hopefully we’ll be one of the consumer technology companies that helps put KC on the map for tech.”

What do you think the future has in store for the local entrepreneur community?

“There is a lot of energy right now, and there are lots of support mechanisms for entrepreneurs. Now it’s on the people creating new companies to work their asses off and become successful (hire lots of people, make tons of money, sell for tons of money or IPO eventually). I believe that’s going to happen. I hope Knoda is one of those success stories.”