A Healthy (Re)Start for Raytown 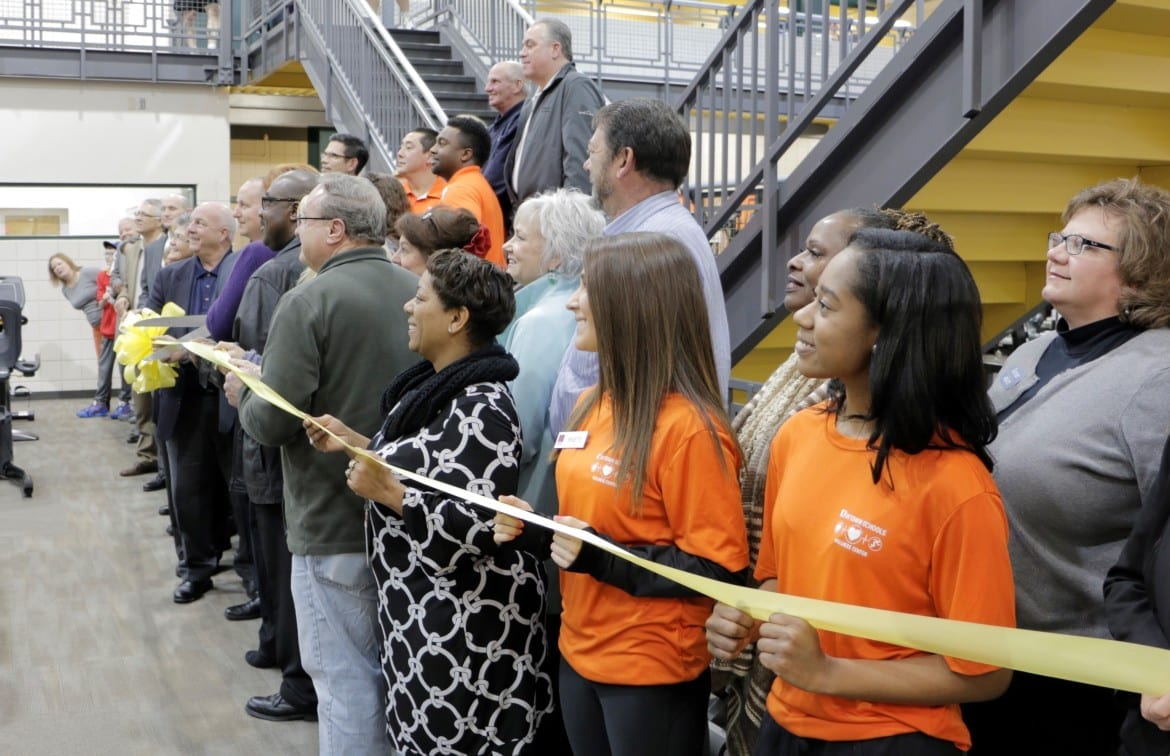 Staff members and a host of other attendees joined Raytown school officials on Thursday as they cut the ribbon on a new community center. (Photo: Mike Sherry | Flatland)
Share this story

Technically, it was a ribbon-cutting for a new health facility, but the christening of a new gym and community center in Raytown was more like removing bandages from an old wound.

That’s because the facility, at 10301 E. 350 Highway, is housed in a refurbished building that the YMCA of Greater Kansas City closed three years ago amid a public outcry, and the bitter taste lasted as long as the old gym sat empty. The Raytown School District bought and refurbished the 45,000-square-foot building for about $3 million.

“Raytown is blessed to have people who care enough about our city not to let buildings sit vacant, but to make it a presence,” Raytown Mayor Mike McDonough said at the Thursday ceremony. “This exemplifies the heart and spirit of Raytown. We don’t quit, we fight for our town, and for the things that make us stronger and better.”

The top-to-bottom renovation took about six months, and work included replacing the basketball court with a weight-lifting area and building a spin-class room in a portion of the old day care space. The aquatic area required the most work, such as retooling the ventilation and resurfacing of the two pools.

The refurbished building also includes a new primary care clinic serving district workers, their families, and district retirees. On-site doctors will work out of space that includes four exam rooms, a triage room, and a pharmacy.

The district estimates the health and wellness clinic will shave nearly $3 million from its health care costs over the next five years and reduce absenteeism. Having competition-level pools will mean that the district can once again host home meets and save the $40,000 a year it has been spending to rent pool space elsewhere.

Raytown Superintendent Allan Markley was especially proud that the district has tripled the size of the coffee lounge. As a user of the old Y, Markley saw how that space fostered camaraderie, especially among the senior-citizen, SilverSneakers set.

Forging that kind of community connectedness is just as important as any financial gains, Markley said. “The benefits go beyond dollars and cents.”

District employees have had access to the gym for a few months, but it opened this week to people who live or work within the Raytown School District boundaries. The monthly fee can be as low as $25.

Former Y member and Raytown resident Mike Apprill was at the ribbon cutting, and his time with the facility included working his kids’ swim meets. “It looks better than the original building did,” Apprill said.

The winding road to Thursday’s ceremony began two decades ago, in 1996, when UtiliCorp United Inc. gave the YMCA more than $1 million to build the center. It was named the Richard C. Green Sr. YMCA after the chairman of UtiliCorp.

The center replaced the city’s existing YMCA, at 11811 E. 75th St., which was then three decades old and showing its age.

The facility opened in the spring of 1998 with state-of-the-art weight equipment, two swimming pools, a youth and teen center, day-care service for children 2 to 5 years old, and meeting room space.

The center opened amid an unprecedented building boom in which the Y planned to spend $27 million over a decade to add or enlarge facilities around the region.

But the tables had turned by March 2013, when the YMCA announced it was closing what it termed financially “challenged” facilities in Raytown, Independence and Kansas City, Kan. The Y eventually worked with city government in KCK to keep that building open.

At the time, the Y estimated the Raytown building was worth about $3 million and had $2.1 million in deferred maintenance costs, attributed mostly to a roof that leaked into the pool area. The Y said operating costs were $40,000 a month.

The city and the school district were unable to get a temporary reprieve from the Y so they could figure out how to keep the facility open.

As the closure of the facilities in Independence and Raytown neared, members of both branches decried the loss of an exercise option close to home.

Members were angry that the Y seemed to be pulling the rug out from beneath residents of eastern Jackson County in favor of building a brand new facility in downtown Kansas City, Missouri.

That new $37 million, four-level center is going into the former Lyric Theatre building at 11th and Central streets. The Y says it might be ready for use by the middle of next year.

In Raytown, the reason for much of the anger directed at the Y after it closed was because the community had launched a spirited fundraising campaign to invest in the building.

As Apprill recalled, the community topped up spending by the Y to provide for a competition-level pool, youth locker rooms, and a community room. Raytown Chamber of Commerce President Vicki Turnbow said residents felt as though the Y had let a community asset crumble and then unilaterally made the decision to close it.

“I think people were surprised, No. 1, that the building was in such bad shape,” she said, “and that (the Y) did not put out a plea to the community or anything along those lines that said, ‘Hey we are struggling, we are going to be closing your Y,’ and I think that is where a lot people felt that, if they had been given a chance to help resurrect it or push for more memberships or whatever (it might have been saved).”

Apprill dug out a thank you the Y sent him for his contribution to the fundraising campaign. His support, the letter said, would help ensure the facility could meet the needs of the community “well into the 21st century.”

Pulling the plug after only a decade and a half of operation did not seem to square with that sentiment, Apprill said.

Mark Hulet, a senior vice president with the Y, said the organization shared the community’s excitement that the building has reopened.

“We were sad to leave and we think that while we were there, we served the community, and the facility served us well. We are just pleased to see that it is going to a positive use to improve the health and well-being of that community,” he said.