New (unregulated?) ways to get a ride

Increasingly popular ridesharing apps like Uber and Lyft allow you to summon a taxi or car service by using a smartphone app. Instead of calling or hailing a cab, the apps track your GPS position, and the car shows up at your location. No physical money changes hands. All payments are made with credit cards, through the app.

In Kansas City, the three major services available are UberX (the less expensive version of Uber), Lyft and Ztrip.

But, there has been some pushback on the new services from the city of Kansas City, Missouri. At issue is a conflict between the city and ridesharing companies and two major questions: what regulations apply to these programs? Should existing city laws for driver-for-hire services apply, or is this a new category?

In Missouri, the Saint Louis Taxi Commission has issued cease and desist letters to ridesharing companies, and the city of Kansas City has filed a petition for a temporary restraining order against Lyft.

City vs. Uber and Lyft

Under existing city regulations, there are two basic types of drivers for hire: taxis and liveries. A taxi is defined by a sign that says “taxi” or a meter. A livery is basically everything else, like “black cars” or car services.

Jillian Mehl is the supervisor of investigation for Regulated Industries, the department that issues licenses for all kinds of businesses to function in the city. In her view, all Uber and Lyft drivers and cars should be certified as liveries.

“You can call them whatever you want to call them, but when you break it down to the fundamental, they are exactly what falls into the criteria of a livery,” she said.

To become a livery, the driver and the vehicle must be certified through the city’s Regulated Industries division. Requirements for that certification include some sort of commercial driver’s license, a background check, a driving history check, a medical history check, an in-person vehicle inspection, proof of commercial insurance and a written and verbal test.

That brings us back to Uber and Lyft. Both companies screen their drivers before giving them access to the app, but they both say the existing rules don’t apply to them because their business model is a new category of car service.

Uber is working with the Kansas City, Missouri, mayor’s office to figure out a solution. Andy Hung, general manager of Uber Kansas City said, “Really the issue is kind of finding a process that works for this business model, which is unlike traditional for-hire vehicles.”

Katie Dally, a representative from Lyft, said the company is “open to any regulations that authorize our model, as long as they prioritize public safety and take into account the differences between our model and the existing model.”

The conflict begs the question: what exactly is ridesharing? Is it people finding and paying for rides through an app like Uber or Lyft? Or is it more like carpooling or hitchhiking, where you would ride with someone already going in your direction?

Bill George, president of the Kansas City Transportation Group, thinks what Uber and Lyft are doing should not be defined as ridesharing.

zTrip: An app for taxis and liveries

The Kansas City Transportation Group, which includes Yellow Cab, 10-10 Taxi and a variety of other for-hire livery services, uses an app called zTrip. The app is almost identical to Uber and Lyft in function and interface. The main difference is that all zTrip vehicles are existing taxi or livery vehicles, and they’re all licensed through the city.

In George’s opinion, there’s no difference between his business and Uber or Lyft. “They are in the exact same business that the cab companies and livery companies are in. They transport people for hire,” he said. 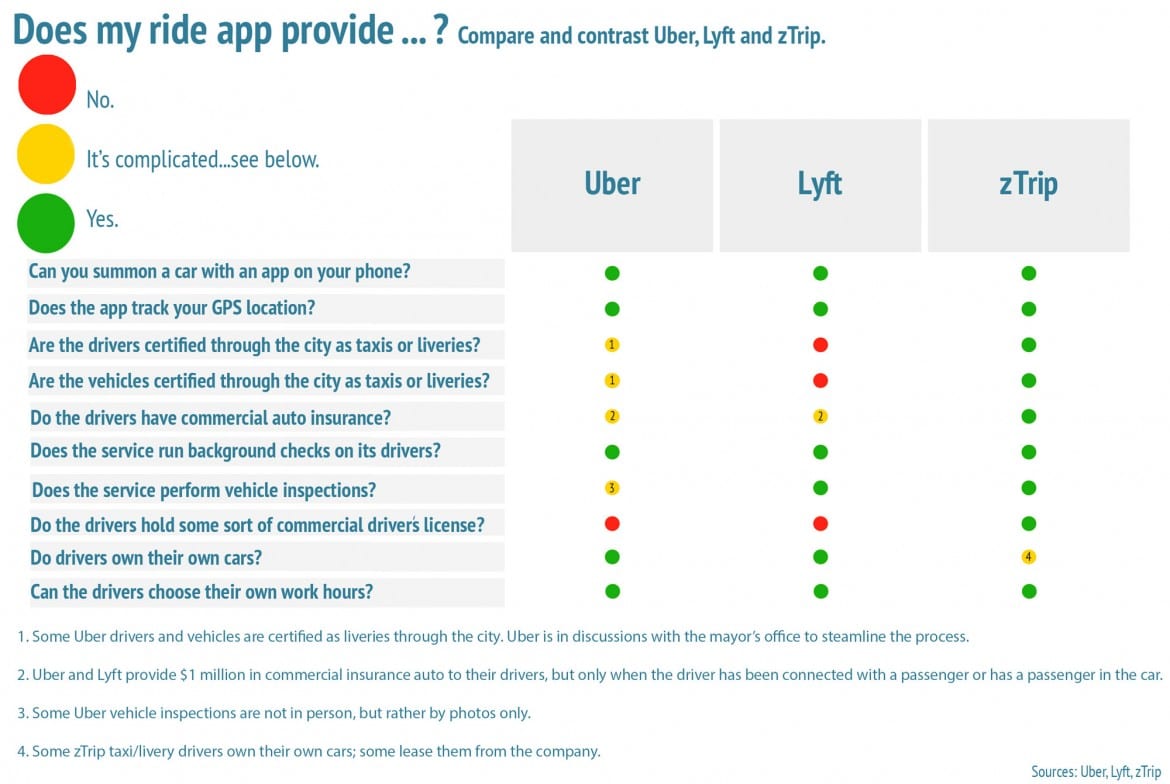 Uber and Lyft have nearly identical insurance policies. Both give their drivers a $1 million commercial insurance policy. The catch is, that’s only when there’s a passenger in the car or the driver is en route to pick up a rider.

When the driver has the app turned on and is seeking passengers, they’re given significantly less coverage. This “contingent” insurance is only about twice the amount of state minimum auto insurance for Missouri and Kansas.

According to a report by the National Association of Insurance Commissioners, based in Kansas City, “The risks associated with participating in ride-sharing services are not yet completely understood and do not fit neatly into insurers’ current risk pooling models, raising numerous insurance related questions. Specifically, there is increasing concern over the potential gaps in insurance coverage in the unfortunate event of an accident or injury.”

The NAIC, as well as the Kansas Insurance Department, have issued consumer alerts warning ridesharing passengers and people considering using their own vehicles for ridesharing that there may be gaps in the insurance coverage.

For George, insurance is a huge issue. He’s worried because drivers are technically allowed to drive for both Uber and Lyft at the same time. He presented a scenario: a person has two phones open on his or her dashboard — one running Uber and one running Lyft. If this person hits a pedestrian when they are between passengers, which company’s insurance would cover the cost of the accident? Neither Uber nor Lyft prohibits its drivers from using both platforms at the same time.

Kansas City isn’t alone in its struggle to find middle ground with ridesharing companies. Other cities, including Chicago and Los Angeles, have also sought answers to the question: how do you regulate ridesharing?

And in Kansas City, Uber and Lyft both plan to continue seeking a way to regulate their business model. Lyft will be doing so in court, as it is scheduled to go to trial with the city over the issue later this month.

The City of Kansas City vs. Lyft trial has been rescheduled for Dec. 15.

Is driving for - and riding with - Uber worth it?