A Trip Back to a Childhood Spent in Westport Orphanage

You Asked and We Opened the History Books

Above image credit: The Kansas City Orphan Boys’ Home was on Westport Road. A local reader wrote in to ask, "I was raised in the KC boys orphans home. It was located in the Westport area. What can you tell me about its origin and when it closed?" (Courtesy: Missouri Valley Special Collections, Kansas City Public Library)
Sponsor Message Become a Flatland sponsor

This piece of headgear is part of the habit that the Daughters of Charity of St. Vincent De Paul wore. The order of nuns ran the Kansas City Orphan Boys’ Home, where Bessenbacher spent nine years of his childhood.

Over time, the orphanage evolved into various schools and a medical center. It changed locations three times, and the Marillac campus of Cornerstones of Care in Overland Park, Kansas, is the existing descendant of the orphanage. Its original location at the intersection of Westport Road and Southwest Trafficway in Kansas City is now home to a shopping center. A Dollar Tree, First Watch Cafe, Ace Hardware and Half Price Books form a crescent facing the intersection.

Some of the lampposts scattered throughout the parking lot have been at the intersection since the orphanage was there, Bessenbacher said. Remnants of cement and stone walls surround parts of the property.

Here, where people go to eat brunch, buy tools or hunt for bargains, Bessenbacher once played sports, made friends and learned life lessons.

Use the slider on the photo to compare what the area looks like today versus in the 1960s.

Bessenbacher, now 80 and a resident of Shawnee, Kansas, recounted his experiences on the patio at First Watch, where the orphanage’s playground was, he said. He still has a scar on his wrist from when he tried to climb over the playground fence.

“I don’t know where I would have run to, but it probably would have been to the drugstore down the street,” he said.

That was where boys went if they managed to escape, and they always stayed there briefly until the police brought them back to the home. It was a critical part of Bessenbacher’s childhood, and he turned to curiousKC to find out more about its history.

The Daughters of Charity Province of St. Louise in St. Louis provided Flatland with documents that outlined the history of the Kansas City Orphan Boys’ Home. According to the book “This Far By Faith: A Popular History of the Catholic People of West and Northwest Missouri” by former Kansas City diocesan archivist Rev. Michael Coleman, the Kansas City Orphan Boys’ Home began in 1895 when 10 women formed an executive committee to create a Catholic institution for boys “who were deprived of a normal home life or had no home at all.” 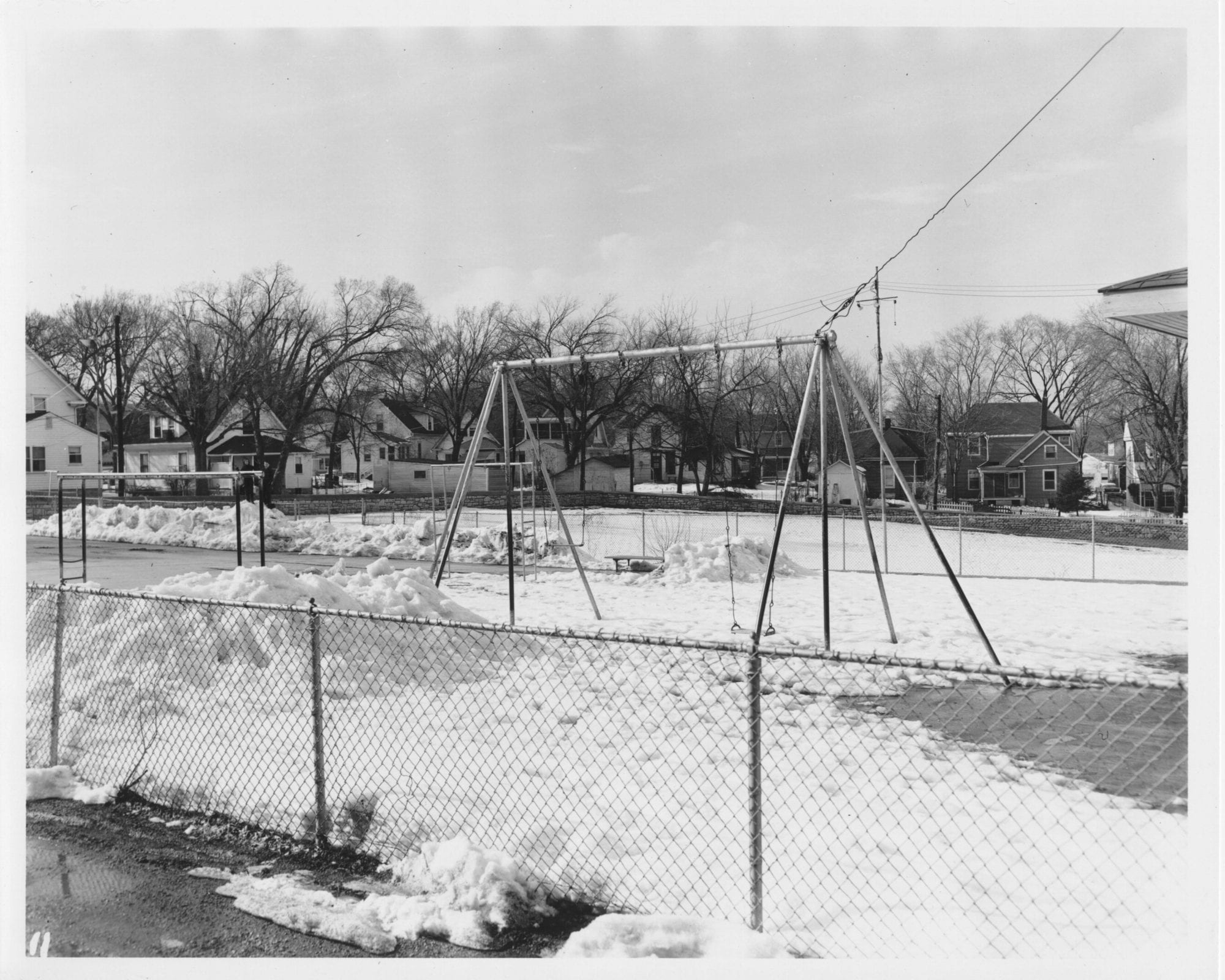 They bought a 12-room house on four and a half acres of land on Westport Road. Two years later, the home had taken in 15 boys. The Daughters of Charity took over the orphanage at that time because the executive committee could not devote sufficient time and energy to caring for so many children.

In 1913, the orphanage asked the Kansas City School Board to allow public school teachers to teach at the home, and the board approved the request. In 1940, the year Bessenbacher entered the home, the request was found to be unconstitutional, and the Daughters of Charity became the teachers.

Life there was very structured, Bessenbacher said, and discipline sometimes came through a spanking with a bamboo stick.

“It was usually done in front of the rest so that the other children could see this is what happens when you’re not a good boy,” Bessenbacher said.

Today, Cornerstones of Care’s mission is “partnering for safe and healthy communities,” Sheldon said. The Marillac campus is a psychiatric hospital that provides emergency care for children and adolescents struggling with self-harm or suicidal thoughts. Sheldon said the hospital provides residential care for children who need to stay there longer than five to seven days.

Harmon said Marillac has changed its treatment and shortened its usual length of stay since the 1990s because society has evolved and children’s exposure to adversity and trauma is different now.

“We wanted to keep children in the least restrictive environment possible,” Harmon said. 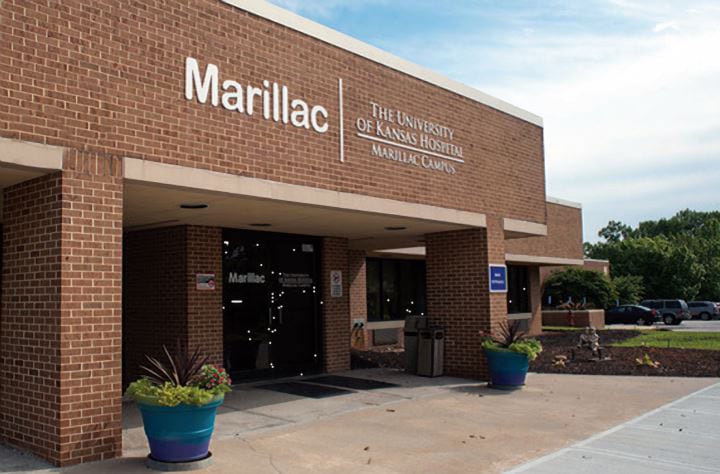 Bessenbacher said the orphanage had a chain-link fence, at least 10 feet long, “to keep people out and keep the children inside.” He remembers seeing boys with their faces pressed against the fence and fingers wrapped around the links, curious about a world to which they had basically no exposure.

They finally got a taste of freedom during fifth, sixth and seventh grade. Every day the nuns would walk the boys two blocks on Westport Road to and from Guardians Angels Parish, where the boys attended classes.

“The distance between here and the school showed us children there was a life outside of the fenced-in area,” Bessenbacher said.

There was indeed a life outside the Orphan Boys’ Home for Bessenbacher. He was 12 years old in 1949 when his mother reclaimed him and his brother.

Bessenbacher’s parents were married straight out of high school. When he was a small child and before his younger brother was born, his father left the family. His mother moved back in with her mother, stepfather and three brothers.

Eight people living in a house of about 1,000 square feet was probably overcrowded, Bessenbacher said, though he doesn’t remember his short time there. Social services found out about the situation, and a judge ordered Bessenbacher’s mother to put him in the orphanage. He was 3 years old.

His brother joined him a few years later. Their mother was allowed to visit every Sunday, but they saw her only about once a month, Bessenbacher said.

“We always knew who she was, and we loved her to death,” he said.

She remarried in 1949 and reclaimed her sons from the orphanage via another court order. Bessenbacher said the five or six years of childhood he had with her after that wasn’t enough, especially since his formative years had been without her.

Bessenbacher does not know how many other children were not actually orphans. The boys were in the home for a variety of reasons, he said. Some were “juvenile delinquents,” some came from poor families and some had been abandoned. Not all of them were adopted or reclaimed by the time they were about 12, and those boys went into the foster system.

“To the best of my knowledge, the success of children coming out of the orphanage with the credentials to take care of themselves was somewhat limited,” Bessenbacher said.

In 1975, a man hired to kill a friend of Bessenbacher’s turned out to have been one of his best friends from the orphanage. The man is still in prison today, Bessenbacher said. He and his brother lost contact with the other boys when they left the orphanage, but he said he still remembers the names of the ones he knew well.

Walking around the edges of the property, Bessenbacher pointed out the still-standing fragments of the walls that surrounded the orphanage. Cars roared by on Westport Road as he stood on the sidewalk, facing where the front entrance of the building was.

What was a baseball field is now an alley for delivery trucks. The swimming pool was just west of the field.

Bessenbacher credits his time in the orphanage for his self-discipline and nine good years of Catholic education. There were things, though, he said the orphanage did not provide him.

“I didn’t have access to motherly love and fatherly leadership,” he said. “That’s where society, I think, failed me.”

— Tess Vrbin is studying convergence investigative journalism at the University of Missouri-Columbia and will graduate in May 2019.


Got a question about Kansas City, the region or the people who live here? Anything you’ve always wondered about, found peculiar or downright confusing? Share your questions with KCPT’s curiousKC