The year was 1966. The Vietnam War was escalating, but the public tide had not yet fully turned against the war. That didn’t stop Joe Draegert, then a 20-year-old student at Kansas City Art Institute, from deciding to make a statement.

Even as a boy, growing up in the small town of Chariton, Iowa, Draegert knew he wanted to go to art school.

“Art was always the biggest thing in my life,” he said. His grandfather, an amateur painter, used to lead Joe and his siblings through informal drawing classes for fun. Reached by Flatland at his studio in Stockton, California, Draegert laughed to recall it. “These were the days before video games.”

After high school, Joe looked at a couple of places for college, including the Art Institute of Chicago. “But I had an aunt and uncle who lived in Raytown,” he said, “So I brought a portfolio down to Kansas City and was accepted – and was offered a scholarship.”

Still just a sophomore in ’66, Joe and a bunch of other students started organizing – if “organize” isn’t too fancy a word for it. Basically, he says, it was just a bunch of people talking about Vietnam.

“We had what I guess you could call discussion groups. All of these politicians were behind Lyndon Johnson and the Vietnam War. It just seemed very obvious to us that the war was a big, big mistake.”

He talked about the horror of seeing dead soldiers on the nightly news. “It was terrifying. It just didn’t seem to make any sense….” his voice trailed off.

Although he was just starting to find his creative voice, Joe decided to make a bit of anti-war agitprop. The untitled work was influenced by Robert Rauschenberg, a master of postwar visual arts who had also studied at KCAI.

Like much of Rauschenberg’s work, Joe’s piece was a sort of painted collage, blending thematically-connected images into a kind of canvas dreamscape. One of the images was of Joe’s uncle who fought in World War I. Another was the iconic Fallout Shelter sign, yellow triangles on a black circle, which had once adorned tens of thousands of American buildings. The piece also contained a single line of text, “War is good business, invest your son.” The darkly comic slogan, sometimes attributed to beat poet Allen Ginsberg, had become a shibboleth for the anti-war movement.

All in all, Draegert spent about a month making the painting. His professors liked it enough to put it on display. “They would hang works they really liked in the cafeteria,” he said.

A few days after the piece was hung, something happened – one of those seemingly innocuous events that has reverberations which can last a lifetime. A young man, whose name is lost to history, came to the KCAI campus to visit a cook in the cafeteria. The guy was about to head overseas for a Vietnam deployment, and the painting’s virulent anti-war sentiment made him mad.

“He called The Kansas City Star to complain,” Joe said. “The Star came out and did a story and put it on the front page.” 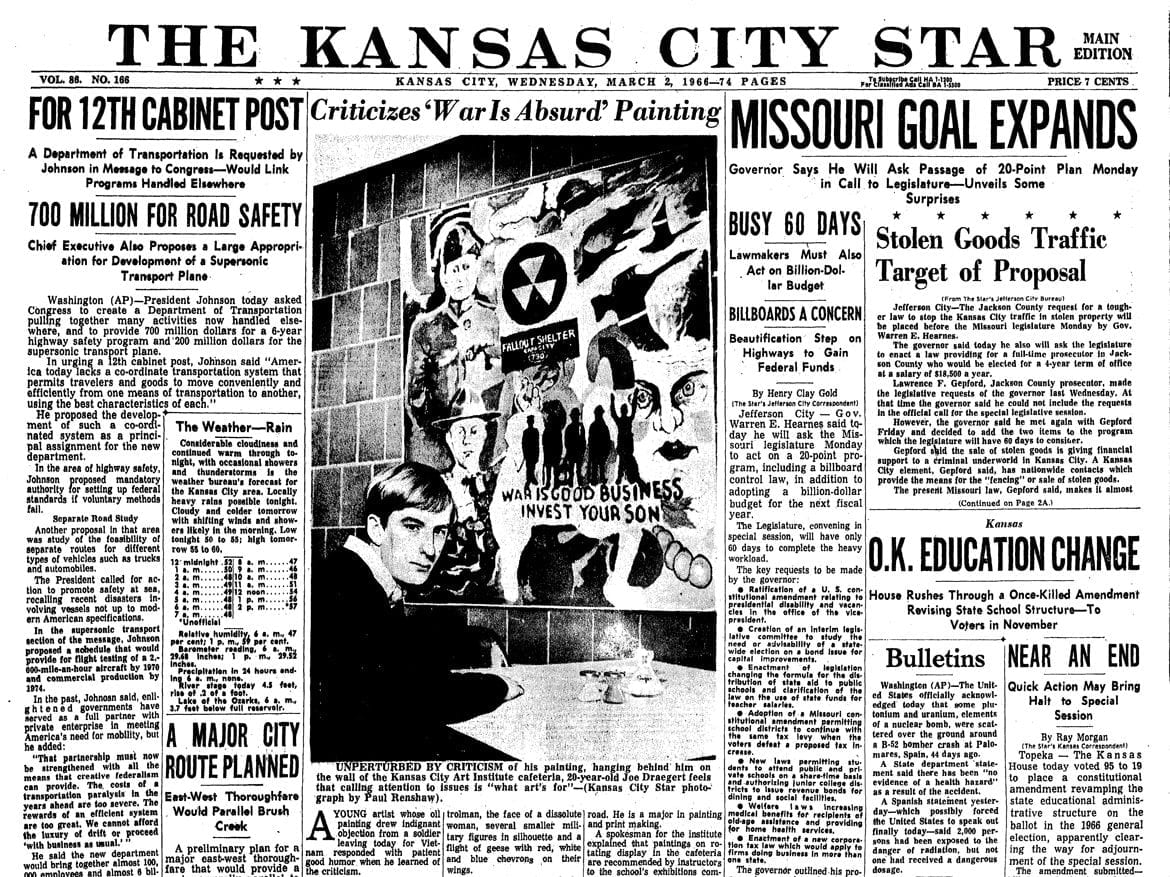 Immediately afterward, United Press International, a wire service with a then-massive reach, picked up the story.

“It went all over the country. I got letters from all over, pro and con. And I’ve got to tell ya – my mother – she worked in this Woolworth’s in this little town in Iowa. People came in and gave her a really bad time.”

Soon enough, the furor died down, though, and Joe went on with his career. He moved west after graduating from KCAI, earning an MFA from UC Davis. Soon he found success, both as a teacher and working artist. His paintings, mostly oil, won him a fellowship to Yale and prestigious Prixe de Rome, among other honors. Today his work lives in gallery and museum collections, including the San Francisco Museum Of Modern Art.

It was as a teacher, though, that Draegert’s Vietnam connection came full circle. Right after getting his Master’s degree, Joe landed a teaching job at Shasta College, a community college in northern California. There he taught painting and art history.

“Well, who do you think was coming to these classes, but all these Vietnam vets,” he said. “They were coming up to Shasta to go to school on the GI Bill.”

These were the very sons that, a few years earlier, he had warned against “investing” in the war. He saw them coming home with deeps wounds, psychological as well as physical.

“The vets would start yelling and stuff. Some were really, really disturbed.” They didn’t necessarily shout about politics, he said. “They were just PTSD guys.”

Eventually, Joe would address the issue at the beginning of each semester. He would acknowledge the vets, saying he knew they were having a tough time and invite them to come to his office and talk rather than yell out in class.

“They just needed someone to talk to about the horror,” he said. 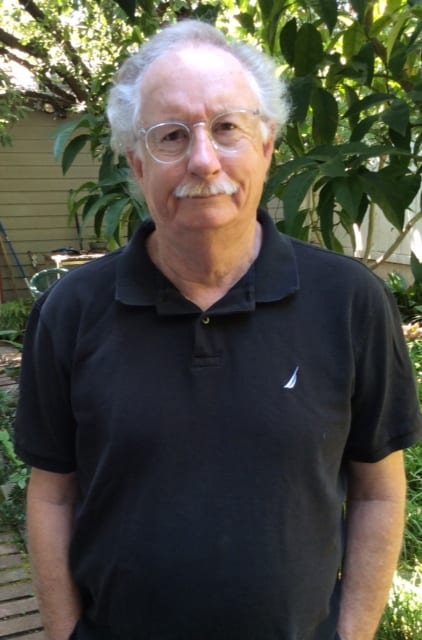 Today, the artist lives and works in California. He says he doesn’t know where the painting is now, but that “the damn thing has haunted me all my life.” (Courtesy of Joe Draegert)

“For me, the irony was that I was against this war to begin with, and here was a result of this thing – the guys that had survived this horrible, horrible situation.”

And where is the famous painting today? No one knows. The painting’s legacy, however, remains. Even now, 50 years later, Joe sounds amazed that he still gets asked about it.

“Every few years it pops up again,” he said. “The damn thing has haunted me all my life.”

— Hampton Stevens writes about the arts and entertainment for regional and national publications. He lives in Kansas City, Missouri, with his pit bull, Ginger. Follow him @HamptonStevens

— This story is part of Flatland and KCPT’s local engagement and reporting around the broadcast of a new, 18-hour documentary series “The Vietnam War” from Ken Burns and Lynn Novick coming this September. The Vietnam War affected the lives of numerous Kansas Citians including veterans, civilians, activists and refugees. We hope you’ll share your own story and perspectives on the war and its impact with us here.

Toggling Between the Abstract and Figurative