Celebrating Kansas City And All Its Traditions (From Here and Abroad) 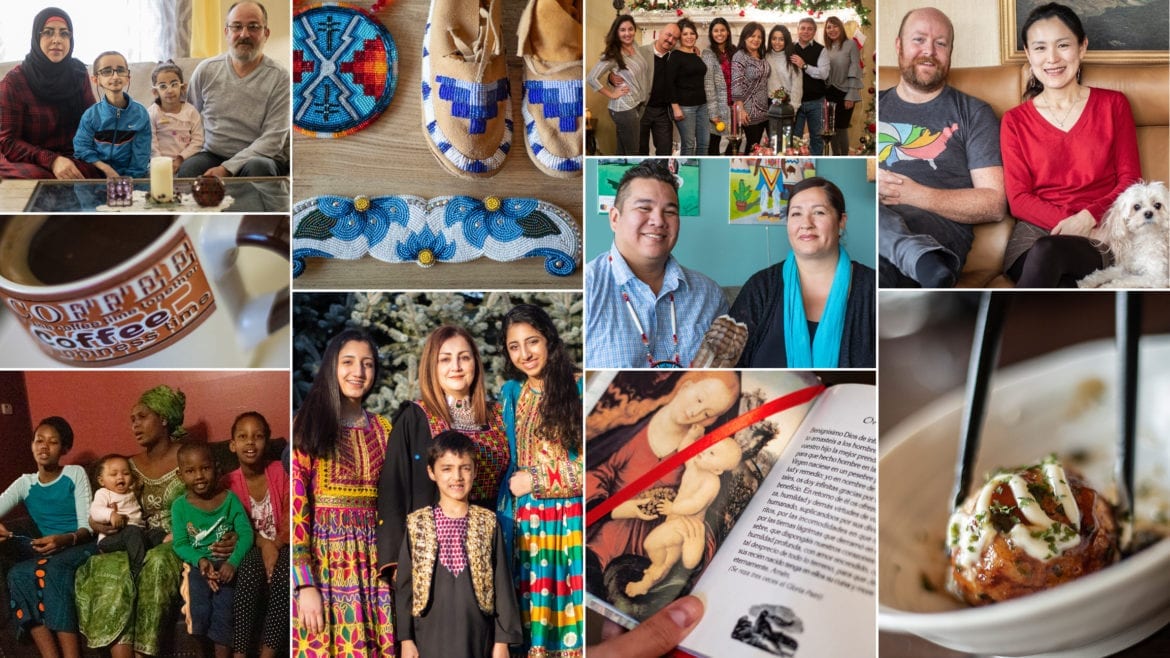 Flatland spoke with six families from different cultures to learn about their traditions and holiday celebrations. (Brad Austin | Flatland)
Share this story

For some, it is art. For others, it is food and music.

The common thread, however, is that these activities are touchstones for transplants to the Kansas City area — some of whom arrived from halfway around the world as refugees from violent conflict and political turmoil.

The holiday season is a time to celebrate such customs and traditions, and by welcoming Flatland into their homes, six families provided a glimpse into what makes some of the area’s multicultural residents unique and how they help shape Kansas City’s identity.

Music is the heartbeat of the Serukiza family, which includes eight children ranging in age from just a few months to 20. The parents are Pastor Muhizi Serukiza and his wife, Immeculee, who came to Kansas City three years ago as refugees from their farming town in Congo.

Visit their household in northeast Kansas City, Missouri, and it does not take long for a couple of the older kids to set up a keyboard and a guitar. Moments later, the whole family is smiling and clapping along to a song Immeculee wrote called “Tunashukuru Mungu ametimiza,” which means: “We thank God because he answers prayers.” The family is nothing short of grateful.

“I can say we are blessed to be here in Kansas City,” Muhizi said.

That is especially true during the holiday season.

Muhizi is the founder of Christ’s Salvation Church on Independence Avenue in Kansas City, a version of the church he led in Congo. And on Christmas Day, he and his family plan to celebrate at the church with a service, music and a feast.

The menu? It includes lots of vegetable-and-starch-based foods with sides like ugali, a sweet bread similar to doughnuts.

Muhizi embraces two of his young children, who flock to his side, as his oldest daughter extends a plate full of round, perfectly golden ugali. “You have to try,” Muhizi said.

Muhizi Serukiza and Immeculee have eight children together and are housing his brother’s child. (Photos: Brad Austin | Flatland)

Muhizi Serukiza plays a song written by his wife, Immeculee, who is with four of their eight children.

Ugali is a sweet, doughnut-like bread, baked and fried.

You might say that the Billen’s Lawrence, Kansas, household is all about blending.

It starts with Yuka Naito Billen and her husband, Sam. She is from Japan, and he is from Topeka, Kansas. They met in the University of Kansas dorms in 2000, started dating a few years later, married in 2004, and now have two children, Hannah, 9, and Noah, 3.

Sam’s job takes them back to Japan for extended periods, but even when they are home in Lawrence, their house has a Japanese feel. They have practical items such as the “kotatsu,” or “hot rug,” under the dining room table and sentimental items such as paper flowers handcrafted by Yuka’s late grandmother.

Sam and Yuka host a party where friends bring a dish from their culture, and the rest of the night is spent eating and drinking until midnight. Dishes like hot pot, from China, or takoyaki, from Japan, are cooked on the dinner table to encourage conviviality. Everyone’s together, shoulder to shoulder.

“(With) hot pot and stuff we can eat as we cook so everyone can enjoy the meal at the same time, so I like it,” Yuka said.

Yuka does what she can to pass along the culture of her homeland to her children. Last year, for example, she dressed her daughter Hannah in the same kimono she had worn when she was 8 years old.

“There’s little things interwoven into our lives that are Japanese, which is really cool,” Sam said. “I think around the holidays, for everybody, it’s food. For us it’s always an Asian twist to it.”

Sam and Yuka Billen met at the University of Kansas and have since blended their Japanese and American traditions. (Photos: Brad Austin | Flatland)

Takoyaki—translated to “grilled octopus”—is a traditional Japanese snack. The batter is typically filled with green onions and octopus, then it's grilled into little balls.

Yuka Billen recommends topping takoyaki with Japanese mayo and okonomi, which is like a sweet barbecue sauce.

Career moves have taken the Baha family everywhere from Australia to Baltimore, but they have always strived to return to the Kansas City area. And now, they are part of the small Afghan community in Kansas City.

One constant for the family has been Eid, one of the most important celebrations on the Islamic calendar. It is a two-part celebration: Eid ul-Fitr, which marks the end of Ramadan, and Eid al-Adha, or the “Feast of Sacrifice.” The holidays are tied to the Muslim calendar, and the dates jump forward 10 days every year.

Celebrants wear colorful clothing — adorned with detailed embroidery and sequins — and begin their days with prayers in the mosque. After prayers, host families throw parties that draw anywhere from 40 to more than 100 guests. Customs include henna tattoos, a temporary dye traditionally painted on hands, and gifts for the children.

The celebration also includes traditional Afghan food. This year, Eid fell in the summer, so mom, Sina, demonstrated the food and clothing for Flatland, assisted by her two teen daughters and young son.

“Our traditional clothes are something that we don’t get to wear that often,” Sina said. “So on Eid, it’s very special for us to kind of represent who we are: We are Muslim, Afghan Americans.”

Dried fruits and nuts are a large part of Afghan feasts. Pictured are pine nuts in the shell and toot (dried mulberries).

Noqua, or chickpeas coated in sugar, are another staple during Eid feasts.

Syrian Kurds have long faced government suppression, and life did not get any easier with the outbreak of war in 2011. As a Kurd, Abdulkader Alo was lucky enough to flee the Syrian capital of Damascus with his wife and three children two years ago to live with his sister in Denmark.

Their ultimate goal was to receive medical care in the United States for the two of their three children who have a rare disease that inhibits natural development. Their 20-year-old son Ahmad is only about 3-feet-tall, and 8-year-old Jelan, their youngest daughter, is even smaller. Both children must take medicine everyday to survive.

The family made it to Kansas City through the assistance of Jewish Vocational Services, and the children are now receiving treatment at Children’s Mercy Hospital.

Music helps him maintain tradition. He brought with him two temburs – a Kurdish stringed-instrument – which he plays while his children dance.

Abdulkader Alo plays the tembur to a track in his home, which he says lifts his children’s spirits. They will sometimes clap and dance as he plays.

Alifa Hasan serves traditional Kurdish coffee, which is made with ground terebinth beans.

Yet the Lawrence, Kansas, couple, who met while attending Haskell Indian Nations University in Lawrence, share common ground through their reverence of earlier generations.

The couple celebrates Thanksgiving or Christmas with their children and extended family, but they fold in the cultural tradition of praying over small plates of food assembled for deceased ancestors.

Sometimes it’s traditional fry bread, or other times, a hamburger, Beason grinned. “That value is still carried on even if the food has changed,” he said.

But traditions are staples in daily life for them, and these, too, tie back to their ancestors.

For Beason, who now teaches at Haskell, it was his grandfather who demonstrated the importance of generosity by helping his grandchildren.

“It was his way of showing love and respect for us,” Beason said. “That value of being generous with what you have. So I try to instill that in my children.”

Cliff’s grandmother taught her how to harvest and make patties out of chokecherries. She also passed along the skill of beadwork. Cliff now works as an artist and makes beadwork for her children to wear during tribal dances or events.

“It’s my way of showing and giving my love … It is very tedious,” she laughed. It’s decoration, self expression and a way to self-identify with their culture and community.”

Jimmy Beason’s friend made this fan from red-tailed hawk feathers and gifted it to him before a ceremony. The red-tailed hawk is representative of warrior society, important to the Osage tribe.

Mona Cliff most recently taught herself how to make moccasins for her son’s dance and added blue beads, her son’s favorite color.

Wojaji is a traditional berry gravy made from chokecherries, but the go-to has become blueberries because they are easier to find. Cliff also learned to make fry bread, which is used to scoop the berry gravy.

Red decorations and glittery lights adorn Vilma Herrera’s house in Overland Park, Kansas, but the focal point is “el pesebre,” or the elaborate nativity scene stationed at the center of the fireplace.

Herrera has carried on traditions she and her eight siblings celebrated as children in Bogota, Colombia.

“We follow these traditions here in the U.S. because it’s very important that my kids stay connected to their culture and to reinforce their values,” she said.

Many of those values are strongly tied to their faith.

The family celebration begins Dec. 7 with “Dia de las Velitas” — or “little candle day” — on the eve of the immaculate conception. Then, “Novena de Aguinaldos” — a set of prayers said over the course of nine days — runs from Dec. 16 through Dec. 24.

Herrera remembers constructing a nativity scene on the staircase of their house in Colombia, laying everything out piece by piece, except for the baby Jesus. They don’t put him in the scene until Dec. 24, the most important night of the holiday.

Novenas are like an advent calendar counting down to Christmas Eve. Instead of finding a chocolate every day, you celebrate with prayers, song, food and dance each night.

And it’s a group affair. Everyone brings their musical instruments—think tambourines and maracas—to play “villancicos navideños,” Christmas carols about Bethlehem and Jesus’ birth.

The nativity scene is the most important part of the Novena decorations. Baby Jesus is usually absent during the festivities but is added on Dec. 24 to commemorate his birth.

Colombian hot chocolate has extra spices and is traditionally made in a special pot and stirred by a "molinillo," or "wooden whisk."

Pictured is a Colombian savory treat called "buñuelos," which are fritters made of light, airy dough filled with cheese.

Vicky is the community reporter for Kansas City PBS. She can be reached at vdiaz-camacho@kcpt.org.