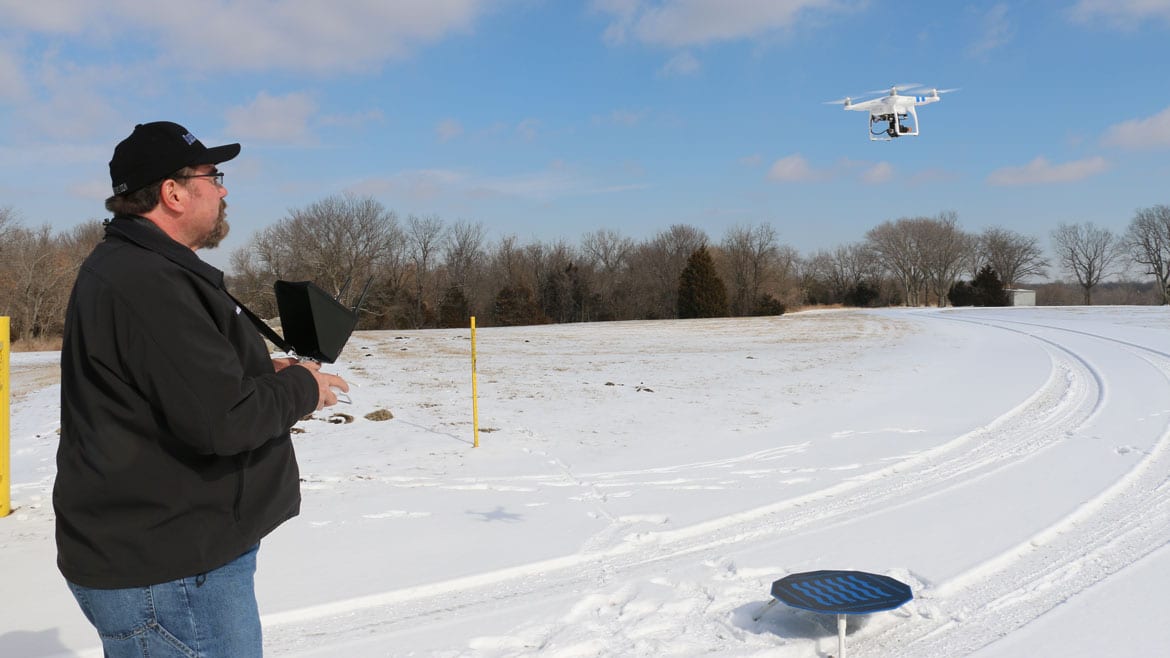 The new rules, which would go into effect within the next few years, would open up possibilities for drone-based companies. Right now, you can legally fly a drone if you are an unpaid “hobbyist.” Companies, however, have to get special permission from the FAA to use drones for business. With the new rules, drones could be used in aerial photography, industrial inspection, agriculture and a whole host of other industries.

According to data from CB Insights, venture and angel funding for drone companies jumped more than 104 percent from 2013 to 2014.

Some Kansas Citians are already hopping on the commercial drone bandwagon. Jeff Roberts, for instance, quit his job at a local news station in December to start his own drone company, Blue River Drones.

He said the new rules are good news for him for one big reason.

“It changes my business to make it legal, for one” he said, laughing.

“I just really think that it’s the future,” Roberts said. “I mean, I quit my job. I’m banking on it being the way of the future.”

Under the new rules, commercial drones would be limited to 55 pounds. Roberts said his heaviest drone is only about six pounds. Drones must stay below 500 feet in altitude and remain in the pilot’s line of sight.

For the most part, Roberts is a fan of the proposed rules. The only rule he is skeptical of is that commercial drone flights would only be allowed between sunrise and sunset.

“What if you want to take a picture of a sunset?,” he asked. “Does that mean you’re breaking that rule when you get back down on the ground?”

“Now someone has to either hang out of a real helicopter or climb up the power pole with an infrared camera,” he said. “Not only is this faster, it’s a whole lot safer.”

“This technology offers many potential benefits to society,” he said. “Due to the size of a small unmanned aircraft, we envision that these aircraft could be used for a wide variety of activities, particularly those that might be considered dangerous.”

Another KC drone-preneur is Casey Adams of Kansas City Drone Company, which he founded last September. He has a background with unmanned aerial systems in the military and considers himself one of the city’s drone experts. The company offers aerial photo and mapping services, as well as flight safety training for aspiring pilots.

Although he has applied, Adams’s company does not have an FAA exemption, so he does not charge for flight time. But he said the new rules actually won’t impact his business very much. He already adheres to a very strict safety protocol which includes always having an “observer” to be an extra eye on the aircraft.

Roberts agrees that because drones are so easily accessible, there are safety issues for those who don’t take the proper precautions.

“That’s part of the problem because somebody who hasn’t had any experience at all flying a remote control aircraft can spend $1,000 and get something that you could really hurt somebody with,” he said.

His advice: Practice, practice practice. He said he recommends anyone who has purchased a drone practice first in an RC flying field like the one in Fleming Park in Blue Springs.

Roberts said he thinks we will see an influx of drone businesses like his as the new rules go into place. He said drones can be useful in so many industries that we probably don’t even know all the possibilities yet.

“I just really think that it’s the future,” he said. “I mean, I quit my job. I’m banking on it being the way of the future.”