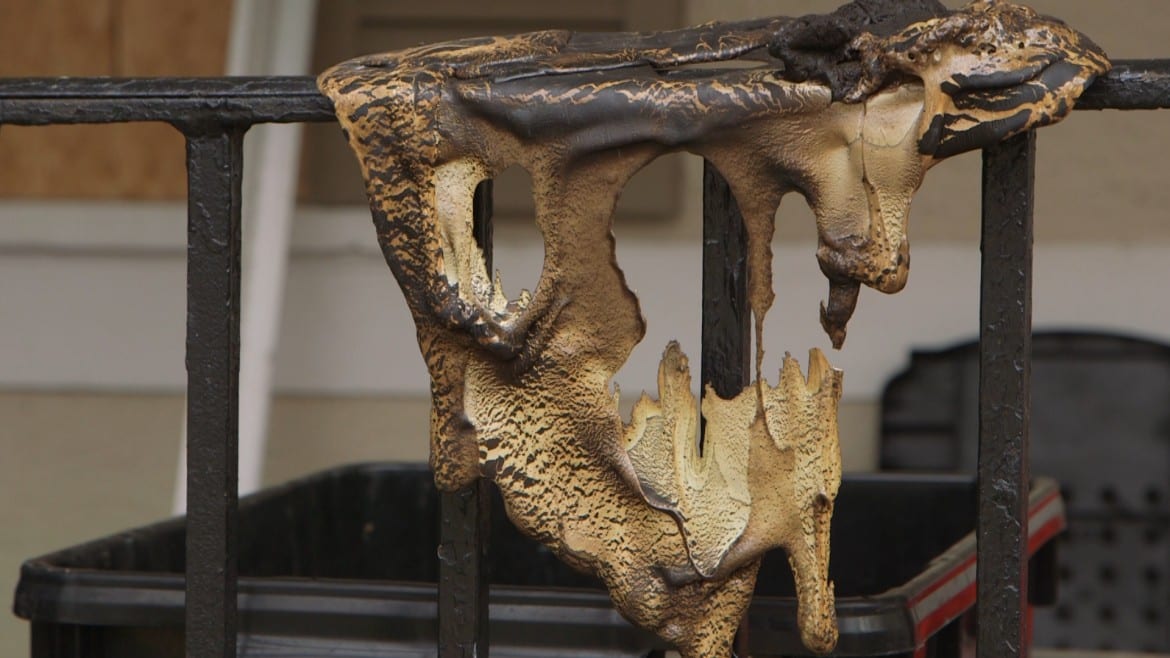 It’s news that no one ever wants to receive, but that Landon Young got the morning after he returned from a business trip to Africa. Two weeks ago he was preparing to give a lecture at William Jewell College when a student, who received a call from Young’s friend, broke the news to him.

“Your house is on fire. You need to go home.”

Young packed his items as calmly as he could and made the long drive back to his home near Brookside.

“I made a conscious effort to think ‘Landon, don’t drive fast, just make it there and address the situation when you get there,’” Young said.

When Young arrived, the blaze was already extinguished and the firetrucks were gone, but he could still feel the effects of the fire.

“When I stepped out of my car, I smelled the strongest smell of burning paint and plastic and wood, a terrible aroma when you know it’s your house,” Young said. “I walked up to the front door and looked inside. It was just so dark.”

Young was not alone when he first saw his burnt house. Mica Canfield, who works with Young at World Help Solutions, was already there. Canfield first learned of the fire when he received a call from Young’s wife.

“I received a call from his wife saying that she couldn’t get hold of Landon, and the house was on fire,” Canfield said. “I dropped what we were doing at the office, and I drove down here to find three firetrucks that were on the street and were shooting water into the house.”

After the fire was extinguished, Canfield went inside to see the extent of the damage caused by the blaze.

“I was in the living room just inspecting the damage when Landon walked in,” Canfield said. “He was devastated by what he saw.”

That’s when Canfield decided to make some calls that ultimately started a wave of efforts from the community to help the Youngs through the challenges ahead.

“I left the house and walked up the street and made three phone calls to people in the entrepreneurial community of Kansas City that I knew would be able to get the word out,” Canfield said. “Within 24 hours, we had a campaign up with RĀZ Mobile. The CEO… gave me a call and said ‘hey anything we can do to help just let me know.’”

Donations began to pour in, in both the forms of funds and goods. There were so many different efforts that the Youngs were unaware of some of them.

Information about the community’s efforts to help the Young family were also added to the announcements at Kansas City’s 1 Million Cups event at the Kauffman Foundation. Prentiss Earl III is an Entrepreneur in Residence at the foundation and has personally helped Young during this process, as well as witnessed how the community has assisted with support efforts.

“Even though this bad thing happened, I know a lot of good that has come from it,” Earl said. “I saw people on [Landon’s] Facebook that were like ‘I’ve got couches, I’ve got chairs, I’ve got clothes. What size are you?’”

Earl explains that even though Young was going through this period of uncertainty, he still was out helping others.

“He was helping some homeless people off of Troost Ave while this is all going on… He hasn’t had any sleep; his stuff is burned up; he’s still helping people,” Earl said. “It came towards the end of the day, and the guys whipped out their little phones, and they were trying to figure out where they are going to spend the night, and Landon didn’t even think about it, then he thought to himself ‘Oh man, where am I going to stay tonight?’”

Earl credits the strong response to the Young’s plight to both the nature of the Kansas City community, as well as Young’s character, which Earl describes as “amazing.”

“The people here want to see others succeed,” Earl said. “Yeah, you want to be competitive and whatnot, but, if you are really down and out, people will rally behind you, and I think Landon’s story really exemplifies that. People care about that, people care about Landon.”

When asked what he had to say about what the community’s assistance during the entire situation, Young replied:

“You’ve changed our lives and our perspective on this community, on people, on humanity. The amount of grace and support and love that we’ve been shown from the Kansas City community has been truly overwhelming, and it’s nothing that you can sum up in a couple words. Thank you.”

One thought on “Community rallies around local entrepreneur after house fire”