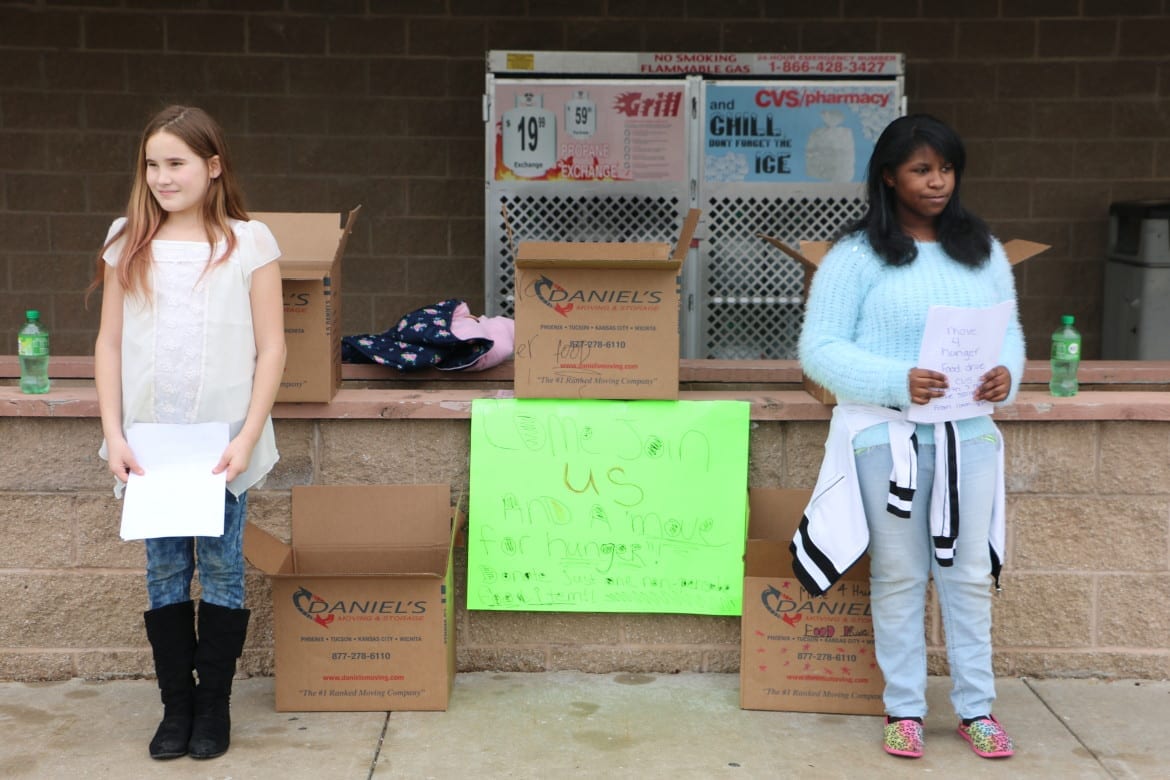 This story was updated after publishing to reflect the full name of one of the subjects.

When Stacie Brewer, 39, of Blue Springs, lost her job, and then her house, she packed up her few belongings and moved into a nearby motel with her two children. Jobless, homeless, and displaced after moving from California for a fiance’ that would end up cheating on her, Brewer tried her best to put on a brave face for her kids. But it was only a face.

“It was a struggle,” Brewer recently told Flatland.“I just tried to stay strong for them. I told them not to worry, that everything was going to be okay, but the truth is, I didn’t know if it was. But if I crumbled, they’d crumble.”

Through the ordeal, Brewer said her daughter, Lexi, never once displayed any bitterness. Despite starting sixth grade in a Blue Springs upper-middle class neighborhood surrounded by wealth and living in a motel down the street from school, Lexi’s mother says her daughter’s spirit never wavered.

“She’s is always looking for the positives in everything,” Brewer said. “She has such a big heart, she is always thinking of others before herself.”

Even so, Brewer says she was taken aback when her daughter approached her with an idea.

“I told her I wanted to collect food for the homeless,” Lexi said in a matter-of-fact way that suggests she doesn’t understand a food drive is not usually on a sixth grader’s to do list.

The idea came weeks ago when Lexi was sitting in her church, Gateway of Blue Springs, and she came to a realization.

“I thought, ‘Even though I wish I was living in a bigger place,’” Lexi said, “’I have food, I have a roof over my head and I have a bed to sleep on, and some people don’t have that.’”

“I thought, ‘Even though I wish I was living in a bigger place,’” Lexi said, “’I have food, I have a roof over my head and I have a bed to sleep on, and some people don’t have that.’”

With that epiphany, Lexi called her best friend Alyna Woodley, and they began to brainstorm.

“We were sitting in the lobby of the motel talking about it,” Lexi said. “At first, we thought we would do a lemonade stand and give the money to the poor. But then we came up with the idea for the food drive.”

Brewer said when Lexi first mentioned the idea she didn’t know what to make of it. But quickly, the idea got them on the move, and Brewer said the organizing helped her out of the depression that had begun to sink in.

“It gave me such hope, such motivation to continue to fight and not give up,” Brewer said, “and I wanted to encourage my daughter to do the same.”

Brewer started researching online how she could make Lexi’s food drive a reality, and her research led her to Move For Hunger, a charity that organizes food drives by sending moving trucks that pick up donations and distribute them to the nearest food bank free of charge.

After coordinating their efforts, Lexi and Alyna hosted their Blue Springs community food drive Saturday, Dec. 12, in a CVS parking lot. They brought five large empty boxes, and after six hours they were completely full of canned goods and dried food items.

Lexi, who wants to be a veterinarian when she grows up, may have found a new vocation in charity work. After the trucks had hauled the food away, Brewer says her daughter was bursting with happiness.

“She was so excited,” she said. “She is already talking about doing another food drive.”

Brewer, who has recently found a new job and is looking for a permanent place to live, said that through her daughter’s activism, her hope in the future has been restored.

“My faith was really tested these past few months,” Brewer said. “But one thing I have learned, is that God works miracles.”

Has Lexi’s story inspired you to do more this holiday season? There are many ways you can still give in Kansas City before the holiday. Read below for a list of events where you can get involved.

Ronald McDonald House Charities (RMHC) Volunteer Coordinator Tara Adler said over the phone that the RMHC is home to over 80 needy families. This holiday season, you can give through their Cooks For Kids program or their Wish List Drive.

“Our biggest need that we have is to have a fresh cooked meal for the families,” Adler said. “Volunteers can come and cook in our kitchens,” she said, adding that even though Christmas Day and Christmas Eve are already booked, there are plenty of other opportunities throughout the season to cook a meal for a needy family.

They are also holding a Wish List Drive. Adler said that because they support so many families, items such as “paper towels, coffee, cleaning supplies, toilet paper, and simple daily essentials” are always in great demand. Those in a giving spirit can pick a wish list and fill up a family’s needs for the week or season.

Operation Breakthrough is the largest single-site early education child care and social services facility in the state of Missouri, serving over 400 children daily from the urban core, according to the organization’s website. The mission of Operation Breakthrough is to “help children who are living in poverty develop to their fullest potential by providing them a safe, loving and educational environment.”

This holiday season, Operation Breakthrough is hosting the Gifts Holiday Store, where those wishing to give can donate gifts for children ages 1-16. Parents who have been pre-screened can then shop the store free of charge. Operation Breakthrough Associate Development Director Jennifer Heinemann said that they are in need of gifts for 12-16 year olds especially.

Givers can also adopt a classroom. Operation Breakthrough hosts 22 preschool classrooms, and they are in desperate need of construction paper, Play-Doh, school supplies, and watercolors.

To make a contribution to Operation Breakthrough, call Jennifer Heinemann at 816-365-5059, or email her at jenniferh@operationbreakthrough.org.

KVC’s Holiday Heroes Program “is a way for individuals, families and businesses to work together to make the holidays brighter for children in foster care,” says KVC’s Community Resource Specialist Jackie Harwig.

“Basically what we do is, all our kids in custody get to fill out a wish list,” Harwig said over the phone. “We type up their wish list for a sponsor who receives the child’s information, what they are asking for, and a big green bag. Sponsors can then fill up the bag and drop it off.”

Kids are still coming in last minute, Harwig said, and while it may be somewhat difficult to imagine, she said foster children get put into the system via a court ruling up until Christmas Eve, so donations are always welcome, even at the last minute.

To become a Holiday Hero, email Jackie Harwig at jharwig@kvc.org or by calling (913) 499-8100. Harwig also said if you do not have the time to shop, you can always make a donation online here.

Are you looking to surprise someone with a furry friend? Or if you are really in the giving spirit, why not give a dog or cat a home?

KC Pet Project, funded by Kansas City Animal Control, is holding a Home for the Holidays adoption drive December 18-24. Those wishing to adopt a new pet can bring home a new dog for the reduced fee of $40, or a new cat for the reduced rate of $20. All adopted pets will have been “spayed/neutered, microchipped, have age appropriate vaccines, have been heart-worm tested, and have received intestinal dewormer,” according to the organization’s website.

Can $1 Houses Help the Unhoused in Kansas City?

Here’s What Nonprofit and City Leaders Have to Say

Checking Out: Some Say Hotels Aren't the Key to Sheltering the Unhoused