Bridging the gap between military and business 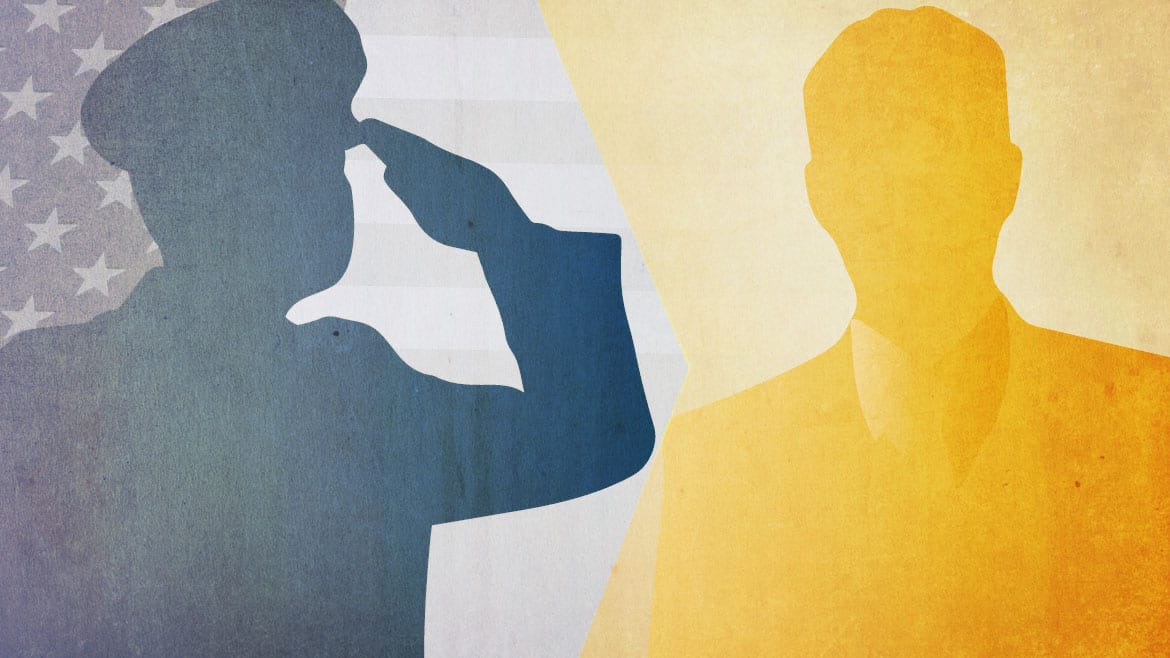 Bob Ulin joined the Army in 1959; he was just 17 years old. He was a private in Germany when the Berlin wall went up. Later, he joined the National Guard in California and volunteered to go to Vietnam for two years. He served in the military until 1992, when he retired as a full colonel with two master’s degrees.

But then he had to make a decision. What to do next? Ulin, like many transitioning military members, found that finding a job in the civilian world was difficult.

“It was miserable,” he said. “I did some very humbling things. I sold products door-to-door, and I learned a lot.”

Since then, he’s worked in the private sector, in non-profits and as an entrepreneur. Ulin said most people aren’t familiar with the military world, and this creates challenges for job seekers leaving the military. According to the Bureau of Labor Statistics, there are more than 700,000 unemployed veterans. And, according to Ulin, there are many more who are underemployed, which means they have jobs below their skill levels.

“A lot of civilians don’t know much about the military except what they see on T.V. or read in the newspaper,” he said. Many civilian employers just don’t know what kind of skills are learned in the military.

Now, Ulin is trying to bridge the gap between the two worlds. He runs a nonprofit called the Center for Transitional Leadership that helps military people find jobs in the private sector. He’s also writing a book called “Transitions,” a primer for people who want to go into managerial or executive positions in the private sector from the military. It’s structured kind of like a workbook, and it draws from Ulin’s own experiences and other people’s stories.

Ulin recommends a program called FastTrac for any veterans who want to go into business. The program, which is offered through the Kauffman Foundation, is a 10-week crash course in starting a business. This year, FastTrac offered a course specifically for veterans at Ft. Leavenworth, Kansas, and several more online courses for veterans.

“I think it’s a very well-organized, comprehensive program,” Ulin said. “It helps you think about if you really want to do this, and if you do and you apply yourself, you will have all the wherewithal to make it happen.”

A incubator for veterans

Sean McIntosh was in the Navy for 13 years and left the military in 2012. Since then, he’s started his own business, and now he wants to help other veterans do the same.

McIntosh is in the process of starting a small business incubator specifically for military members or their spouses. It’s called the Bunker, and it’s part of a national effort that started in Chicago. Kansas City will be the second city to have an incubator like this one.

Right now, he’s in the fundraising stage. He’s hoping to sign a lease at the Enterprise Center of Johnson County in April and host a grand opening in June.

The Bunker will offer a six-month course for veterans in everything you need to know to start a business. It will include the Kauffman FastTrac curriculum, as well as community mentors and local business visits.

McIntosh said he wants the veterans who go through the program to start sustainable businesses and then hire more veterans.

“Our pitch is that we’re not trying to find, like, the next Twitter,” he said. “We’re just trying to help create jobs. It’s all about sustainable companies that will be around in 10 years.”

McIntosh said being an entrepreneur is almost the opposite of being in the military, especially when it comes to resources.

“As an entrepreneur, sometimes you only have $15,000 when you need $150,000,” he said. “Well, in the military, no one would ever be like, ‘We’re only going to give you half of the fuel you need to complete this mission, and you can just figure the rest out.’”

Derek Bereit attended the Air Force Academy and then served for five years. He earned an MBA while he was in the military and then went to law school when left. Now, he’s a co-founder of the startup Symptomply, a chronic disease management platform for asthma patients and doctors.

Bereit has had many jobs since leaving the military — he’s done everything from working on Wall Street to starting his own law firm. He said lots of things that you learn in the military translate well into the startup world.

“Skills like working long hours, the discipline required, the attention to detail and writing skills are huge,” he said. “I learned to work very effectively, working on teams, getting the mission done. (They) are all very highly transferable skills.”

But, he said, veterans should carefully consider what they want to do before starting a business. There are a lot more options for entrepreneurs than just the tech world.

“Tech companies are hot, but that’s not really what entrepreneurship is,” he said. “Entrepreneurship is the difference in going and getting a job and making a paycheck, and getting someone to pay you. It’s the ability to take your own vision and build your own team and make something happen from scratch.”