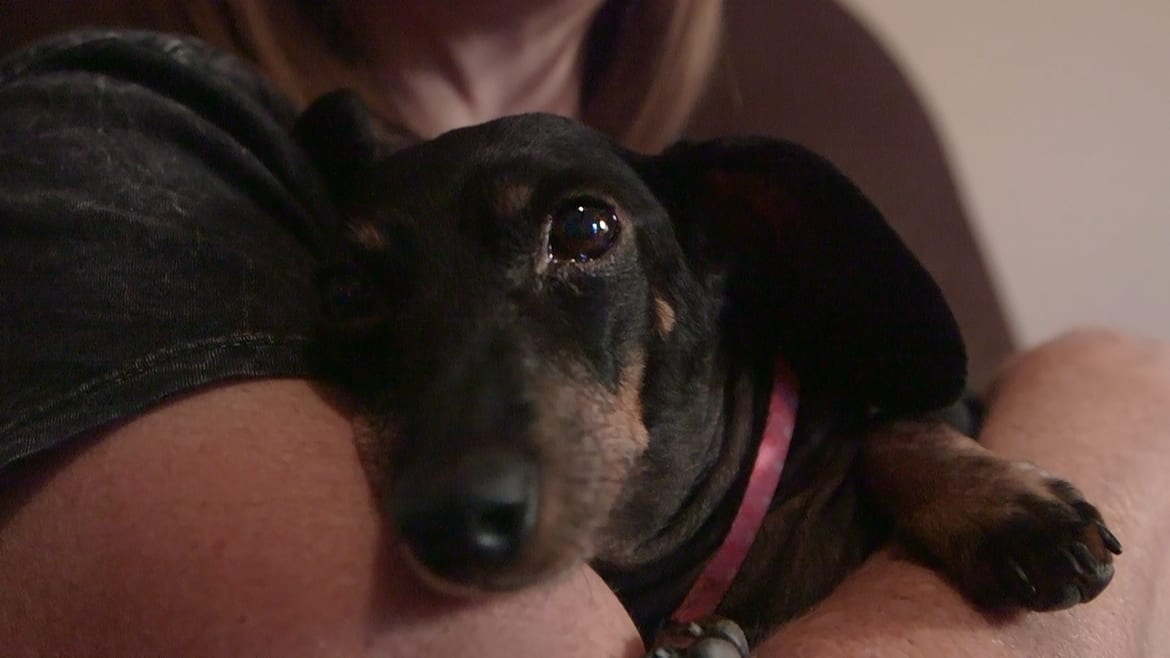 KCPT reporters Todd Feeback and Lindsey Foat visited Kansas City’s Likarda, a 2012 biotech startup hoping to help companion animals suffering from diabetes–using a treatment that started with dogs, then moved to humans, and now, back to dogs.

Every day at 6am and 6pm Stephanie Kallas gives her mini-dachshund Daisy a shot of insulin to help manage the dog’s type 1 diabetes.

“It changes your life,” Kallas said. “You can no longer just go where you want to go, because you have to be back in time to give her a shot. And you have to keep the insulin refrigerated so you can’t just take it with you.”

Kallas isn’t alone. There are an estimated 400,000 dogs and cats in the United States being treated for diabetes with insulin.

If you could cure diabetes in dogs and cats, you would right?

Well it turns out you can and the cure has existed for over a decade. It was developed as part of the medical research for humans with type 1 diabetes, but was left on the bench-top, so to speak.

University of Kansas Medical Center faculty member and diabetes researcher Lisa Stehno-Bittel was shocked when she realized how much work had been done with dogs and that none of the benefits had been translated back to veterinary medicine.

“I expected to see maybe 100 papers, I knew that there was some dog research out there,” Stehno-Bittel said. “But there were over 650 papers … On that day we decided that this isn’t something that we should do, [it’s something] we have to do.”

In 2012, Stehno-Bittel co-founded a biotech start-up called Likarda, which specializes in growing clusters of cells for regenerative medicine and drug screening. She says that because Likarda is in the middle of the animal health corridor, she was immediately asked about possible applications in animals.

In simple terms, the cure for type 1 diabetes in both dogs and humans involves transplanting the insulin producing cells, called islets, from a donor pancreas and injecting them into a patient. Likarda has patented a new method for growing and strengthening islets, which they call a Kanslet.

“We take those islets, take them out of the body and down to single cells,” Stehno-Bittel said. “Then we re-engineer them and grow them into the Kanslet … It produces more insulin, it lives longer after the transplant, and it’s just more effective.”

One barrier for islet transplants in humans is that it takes more than one donor pancreas to harvest enough cells.

“We’ve already cut it down [in dogs and cats],” Stehno-Bittel said. “So we’re looking at a one to one ratio and that’s kind of the first generation to get to market. But we’re already in the laboratory looking at ways that we would not even need a donor.”

The idea of research benefiting both humans and animals, and using health innovations from one to inform the other is by no means a new concept.

“200 years ago veterinary medicine and human medicine were essentially one in the same,” said Kathryn Bowers, co-author of the book, Zoobiquity: The Astonishing Connection Between Human and Animal Health. “The local country doctor, would probably deliver the babies of the town in much the same way he or she might deliver the calves and the foals.”

Bowers delivered the keynote speech at the 2013 Animal Health Research Symposium, which took place on August 26, 2013 in Kansas City, Mo.

Stehno-Bittel also presented at the conference, which focused on animal and human health, and how treatments can relate to both.

Both Bowers and Stehno-Bittel say that people in veterinary medicine and human medicine just don’t talk to each other, but if they did it could lead to innovations in the health of all species.

“We’re just bringing that therapy back to the dog and kind of making that circle,” Stehno-Bittel said. “We believe that as we learn more about diabetes in the dogs that we’ll also learn more answers that we can then feed back to the human islet transplant world.”

In terms of a cure for Kallas’ dog Daisy, Stehno-Bittel says it could be offered within the next 12 months, and the price, they hope, will not be much more than a person pays now for diabetic treatment of their pets every year, which is around $5,000.