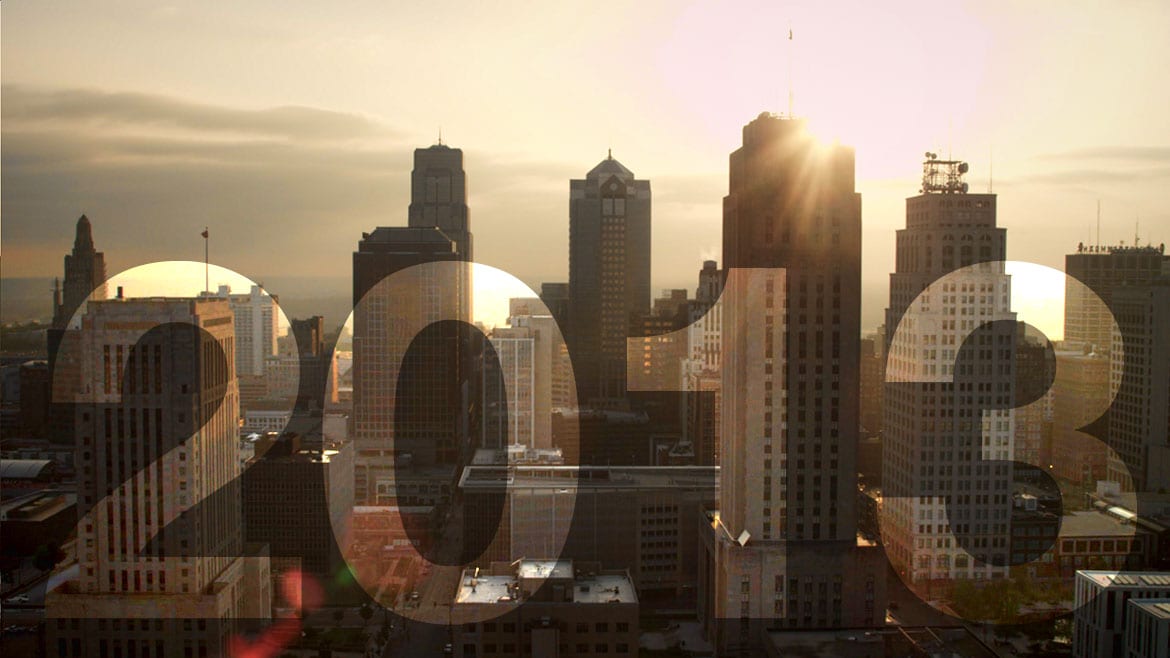 As 2013 comes to a close, it is appropriate (and expected) to reflect on the year’s notable events to see what happened, and what may have passed you by. We have created a list summarizing some of the entrepreneurial and business stories and events coming out of the region this year in chronological order, month by month, for this Entrepreneurship/Business Year in Review.

Mayor Sly James Announces Challenge Cabinet – Kansas City, Mo. Mayor Sly James begins taking applications for a group of young professionals that are supposed to assist the city government by changing how to approach problems and develop efficient and affective means of operation.

GM Plant Investment – The CEO of General Motors heads to town after announcing a $600 million investment in the Kansas City, Kan. facility. This is the largest such investment in the company’s history, and will make the Fairfax plant a staple among the rest of the facilities.

New KCI Terminal – The Kansas City, Mo. City Council approves the exploration for plans of a new single terminal design for KCI airport. The costs of this project are estimated to be $1.7 billion.

Google Fiber Expansion – Google plans to expand its television and ultrafast internet service to the cities around the metro such as Gladstone, Grandview, Olathe, Raytown and Shawnee. They also announce two completely new markets: Austin, TX, and Provo, UT.

Sprint Deal Approved – Shareholders for Overland Park-based Sprint give the approval for the hometown company to go through with the  $21.6 billion merger deal with one of Japan’s largest cell phone companies, Softbank.

Ikea Breaks Ground – Ikea breaks ground for its first store in Kansas. The plans call for the 359,000-square-foot store to be completed in 2014.

Sparklab KC Hosts First Demo Day – Sparklab KC, a business accelerator in Kansas City, hosted its first demo day where the 10 finalists presented their products to a group of angel investors. This was the first class that completed the program.

Sprint Mobile Health Accelerator Announced – Based in Kansas City, this accelerator will take in 10 teams of entrepreneurs and provide them with a three month mentorship period with the potential for up to $120,000 combined seed funding (up to 20,000 per team).  The program will also feature a demo day at the end of the program where the startups will pitch their products to groups of investors.

Boulevard Goes Belgian – Boulevard announces its intent to sell the company to Belgian brewery Duvel after almost a quarter of a century in Kansas City. CEO John McDonald steps down to take a seat on the board of directors.

Bannister Mall Gets New Life – Cerner, Kansas City’s largest private employer, is approved by the Kansas City, Mo. City Council to proceed with their plans for a new 4.5 million square-foot campus on the grounds of the former Bannister Mall shopping center in South Kansas City. The development will be called “Three Trails Crossing” and the company believes that with the expansion will come 15,000 jobs. The project is receiving $1.63 billion in both local and state tax incentives.

EyeVerify Wins The International Get In The Ring Contest – Kansas City, Kan. based Eyeverify, a company that uses an individual’s “eyeprints” for security on mobile devices, flies Toby Rush to the Netherlands to represent the company after winning the national contest, which pits two entrepreneurs head-to-head to pitch their products to judges held at the Kauffman Foundation.

Sprint Considers Bid To Buy T-Mobile – Sources “familiar with the matter” say that the country’s third-largest carrier, Sprint, may be making a bid for the nation’s fourth-largest, T-Mobile. If confirmed, the deal, which could be upwards of $20 million, could take place as early as the first half of 2014. AT&T made a bid a few years earlier for T-Mobile, but that deal was broken apart.  If this deal goes through, there would be three major carriers in the country (AT&T and Verizon).