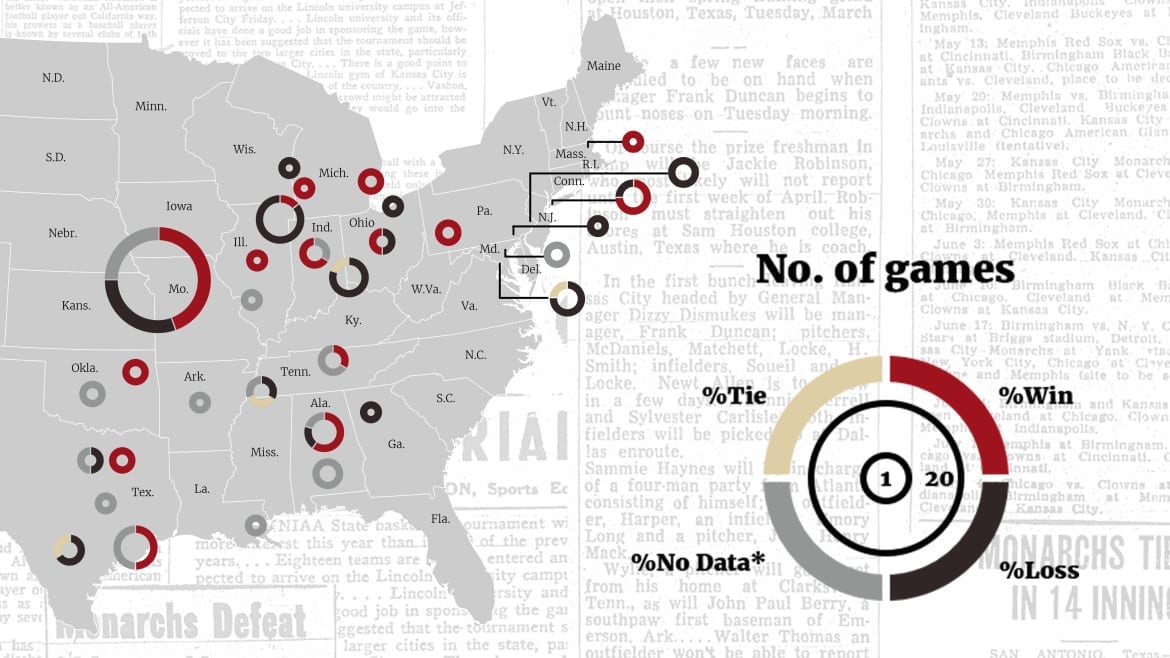 Although Jackie Robinson only spent five months with the Kansas City Monarchs in 1945, he left an everlasting mark on the city. From donning the red and white uniform in April to his final appearance in August of that year, Robinson became a vital member of the team along with the legendary Satchel Paige. Robinson played shortstop while Paige was a for-hire pitcher. The Monarchs, unfortunately, didn’t see playoffs during the ’45 season with its .510 record.

Below is a record of Robinson’s singular season with the Monarchs, including some of the team’s—and history’s—most pivotal moments. The Kansas City Monarchs played 101 games against 18 teams across the East Coast and Midwest. By the end of the season, Robinson had the best average on the team at .375. During this time Robinson was also participating in tryouts for the Major Leagues at the recommendation of noted African-American sportswriter Wendell Smith. Smith played a large role in Robinson signing with the Brooklyn Dodgers and becoming the first African-American player in the Major Leagues.

And while Jackie Robinson will always be best known as a Brooklyn Dodger, for a brief moment he was one of Kansas City’s own.

The Man Behind the History: An Interview

Aaron Stilley, an avid baseball fan and Kansas City native, has gathered much of the 1945 season at his site Jackie with the Monarchs, which is the source for our visual representation. Stilley discusses with Flatland his motivation for wanting to relive Robinson’s year in Kansas City and his future aspirations for all things baseball.

What do you do for a living?

I am the benevolent dictator of my two children, ages four and eight. The hours are long, the money zero, the difficulties abundant, but the rewards, when I remember to notice them, are immense.

Do you still live in Kansas City?

I grew up in the eastern ‘burbs, then spent nine years between Des Moines, Minneapolis, and Iowa City. By the end of those nine years I missed KC something fierce, and moved to the Brookside/Waldo area in 2007. I feel extremely connected to the city and loved being back until my wife’s job situation led us to move to a Minneapolis suburb in 2013. I tried to deny how hard it was for me to leave Kansas City for a long time, which, shockingly, didn’t work that well. It’s only been within the last half year or so that I’ve fully faced how difficult leaving Kansas City was, which has allowed me to move through it a little bit and start to see that I can build a community here, too. But a huge part of my heart will always be in KC.

What was your motivation to hunt down all this information on Jackie Robinson?

All of my baseball writing (which has appeared primarily at my Jackie blog, my Royal Heritage blog, I70baseball.com, and Royals Authority) has been a passion project. (I did sell a freelance article to The Hardball Times once, but I’d rather not do the math on how the few bucks from that compares to the number of hours I’ve spent researching and writing about baseball.) A couple of great opportunities have unexpectedly come my way since I started blogging (most notably getting selected to attend a Blog Your Way to the K event with the Royals, giving a talk at the Negro Leagues Baseball Museum, and a short chat with Sarah Burns when she was developing the Jackie Robinson documentary for PBS), but I’ve written what I have because of my love for and curiosity about baseball and Kansas City. I’ve been quiet lately as I try to figure out how my passion for KC baseball fits in with my need to figure out a way to feel at home in Minnesota, but I expect I’ll always retain that love for KC baseball and some desire to write about it, though my output might be even more sporadic than before.

Where did your interest in uncovering Robinson’s year with the Monarchs come from? Was it an interest from childhood?

It developed later in life. I don’t recall if I was even aware of Jackie’s year with the Monarchs as a kid. I probably heard it as a trivia tidbit but didn’t think too much about it. In my mid-20s I developed a deep appreciation for the lessons the history of the Negro leagues have to offer, most movingly embodied in the spirit of Buck O’Neil. Soon after Buck died in 2006, I read his autobiography for the first time, and the story of the Monarchs and the broader Negro leagues came alive for me in a new and powerful way. I developed a thirst to learn all I could about the Monarchs, and after exhausting all of the modern literature I could find about them, I still wasn’t satisfied. I started combing through some primary sources, especially microfilm of the Kansas City Call at the downtown library. Jackie’s story is of course an extremely important and compelling chapter in Monarchs history, so his 1945 season was my main focus at first, and I wanted to share as much detail about his short time with the Monarchs as I could find for anyone else who shared my curiosity.

What are you working on now?

My youngest will be attending preschool four mornings a week next school year, so I’m trying to look at that as the line in the sand [to] when I’m going to buckle down and get back to work on my dream of producing a book on the Monarchs.

Several Downtown Sites Are Being Pitched