12 QUESTIONS – and answers – about a minimum wage increase in KC 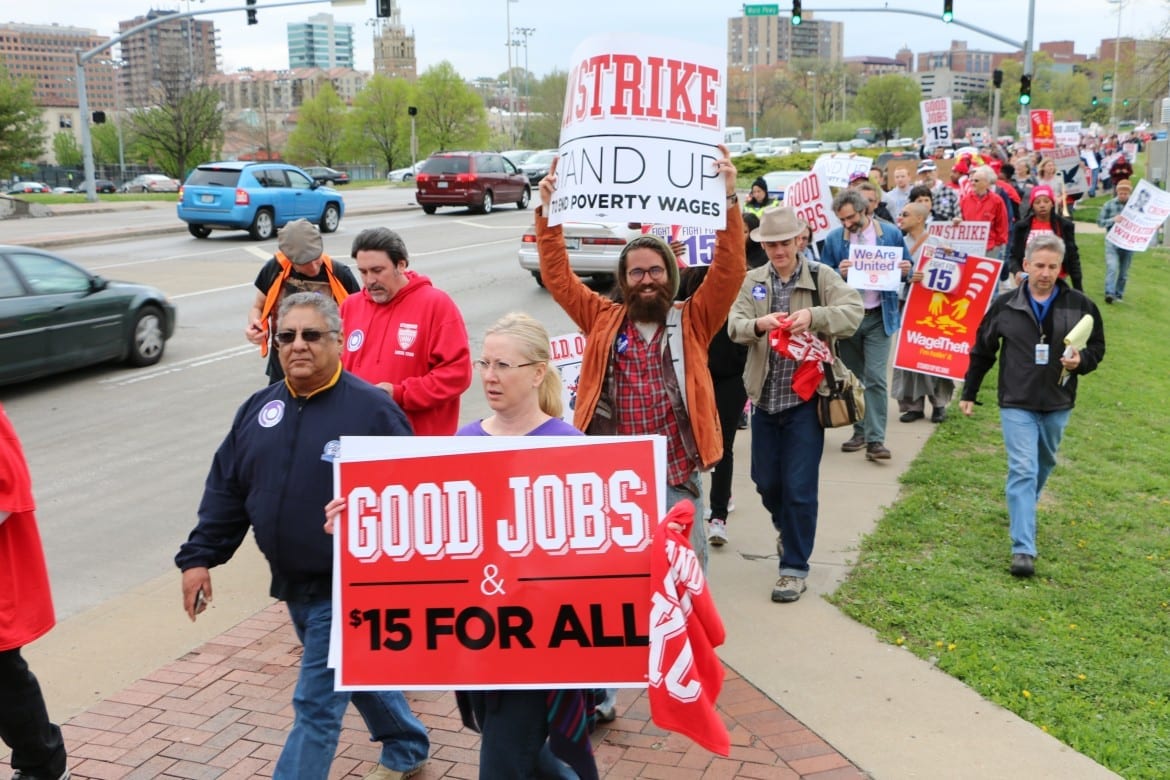 Kansas Citians march on the Plaza in support for higher wages. Photo by Bridgit Bowden
Share this story

Are other cities doing the same thing?

Known as the “Fight for 15” movement, similar protests have sprung up across the nation with considerable success. On Saturday, Los Angeles became the biggest city in the nation to raise the minimum wage to $15, following the lead of Seattle and San Francisco, who have already adopted a minimum wage increase that will rise to  $15 by 2018.

Is Kansas City next, and if so, when?

The next city to increase the minimum wage might just be Kansas City. For supporters of the increase proposal, including KCMO Mayor Sly James, there’s a very small window of opportunity. Currently, Missouri HB 722, which states that a “city within the state would have no power to institute its own ordinance on minimum wage”, goes into effect August 28th. However, the city council is set to meet on July 16th to discuss the minimum wage increase proposal. There is speculation that a vote might be taken then, while the city council can still pass a city wage ordinance legally.

Who is leading the charge in Kansas City?

At the heart of the Fight for 15 movement in Kansas City is the organization Stand Up KC. Made up of fast food and retail workers from across the region, they are the leading voice in Kansas City that is calling for a minimum wage increase. On April 15th, they were a part of 200 protests nationwide that demanded federal law to adopt a national $15 dollar-an-hour minimum wage. Stand Up KC’s next rally is set for Monday, June 22nd, at 5pm in front of KCMO’s City Hall.

What is the current state of minimum wage?

Isn’t that enough income to “get by?”

According to a recent study from the National Low Income Housing Coalition, there are currently no states in the U.S. where a full-time minimum wage worker can afford to rent an average-priced one-bedroom apartment. Even as the the federal baseline wage has remained at a standstill since 2009, housing prices have surged since then. In a recent study, RealtyTrac, a real estate information company, found that home price appreciation has outpaced wage growth in 76 percent of U.S. housing markets in the last two years alone.

Does Kansas City support the Fight for 15 movement?

Will a minimum wage increase boost the economy?

Many supporters of a wage increase argue that not only would it be good for workers, it would be good for the city. Supporters say a higher minimum wage would increase demand and kick start the economy. They argue it would also reduce turnover, cut costs that low-road employers impose on taxpayers, and push businesses toward a high-road, high human-capital model.

What does the opposition to the increase have to say?

Critics argue that raising the minimum wage will not decrease poverty. Rather, there will be higher unemployment because businesses forced to pay higher wages will terminate the least productive employees and be less likely to hire new workers. They argue poverty would increase because there would be fewer jobs, cuts in employee benefits, and a loss of competition in the marketplace.

Is there any research that supports the opposition’s claims?

In May, the Employment Policies Institute (EPI), a non-profit research organization, placed a full-page ad in the Kansas City edition of “USA Today.” The ad portrays Kansas City’s identity in the future as a city associated with lost jobs, along with research that the EPI conducted on the minimum wage increase.  According to EPI’s analysis, raising the minimum wage would damage the economy, increase unemployment and force more people into poverty. Their findings were published by Minimumwage.com., which is also run by the EPI.

Can the EPI’s analysis be trusted?

The New York Times recently reported that the EPI is a public relations firm disguising themselves as a non-partisan think tank and non-profit research organization. In reality, the EPI is run by advertising and public relations executive Richard B. Berman, who has made millions in Washington by lobbying on the behalf of corporate America, and has now taken up the minimum wage increase on behalf on the fast food industry.

Is there any research to substantiate supporters’ claims that a minimum wage will help the economy?

There is evidence that suggests higher wages would improve economic well-being, and that raising the minimum wage would not have a negative effect on employment. Rather, the studies revealed that a state minimum wage increase would have a job growth increase above the national average.

Can this evidence be trusted?

The research pointing to economic growth was conducted by the Scholars Strategy Network, an organization that examines public policy by working unilaterally with college professors and scholars across the country. The job growth increase study was conducted by the Center for American Progress, a progressive think tank with some key objectives on minimum wage that mirror the Obama administration’s views on the topic. The President has been outspoken on his support of minimum wage increase.

Consumer Protection Board Coming to KC

Federal Panel Has Scheduled a Hearing for June 2

'Legends' is still the new kid on the block. Here's why that might be great for KCK.

Tags: Getting By in KC • kc economy