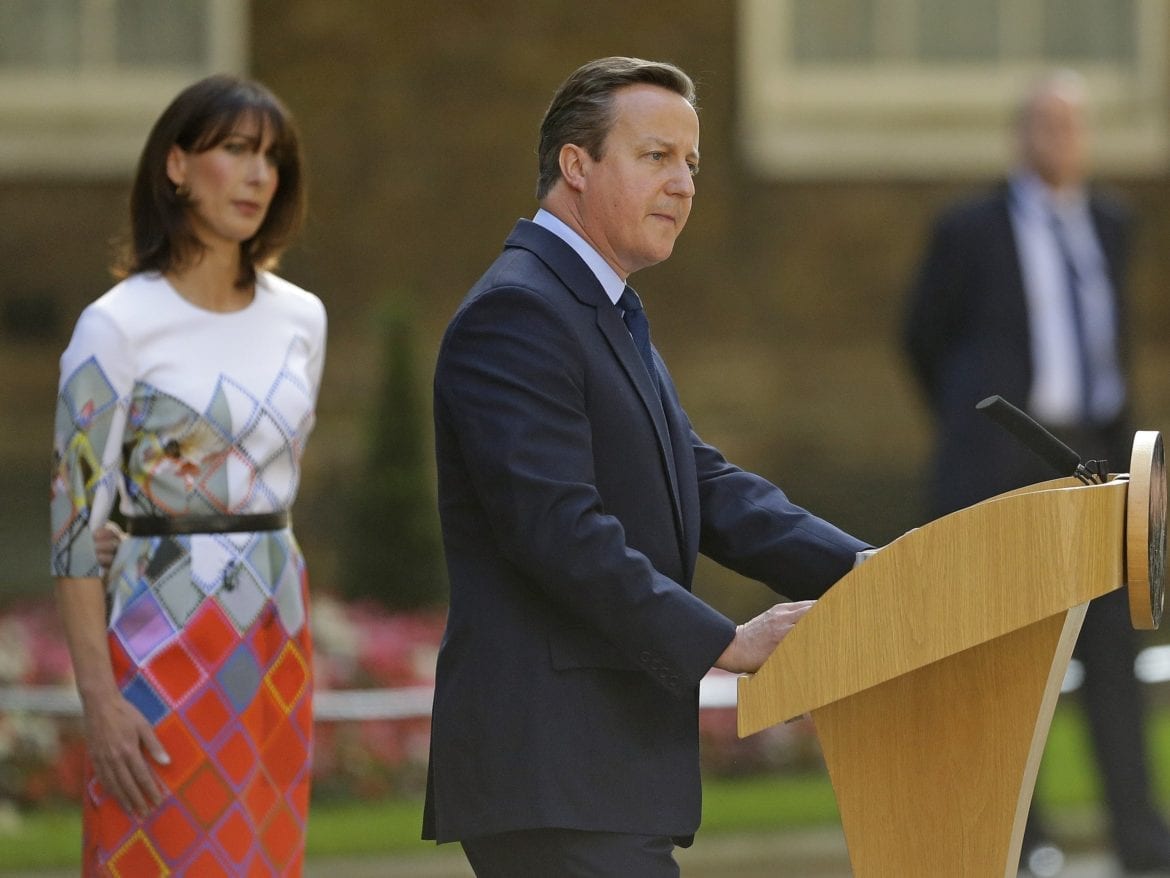 Britain's Prime Minister David Cameron speaks outside 10 Downing Street, London, as his wife Samantha looks on. Cameron says he will resign by the time of the Conservative Party conference in the fall. (Photo: Matt Dunham)
Share this story

British voters have decisively chosen to leave the European Union, 52 percent to 48 percent.

The decision has sent shockwaves around the nation, the continent and the world.

Prime Minister David Cameron announced he will resign before his Conservative Party conference in October.

“I was absolutely clear about my belief that Britain is stronger, safer and better off inside the European Union,” Cameron said Friday. “But the British people have made a very clear decision to take a different path, and as such I think the country requires fresh leadership to take it in this direction.”

The United Kingdom has been a member of the EU for 43 years. Now that will end — though the process will likely take many years of negotiations.

In the meantime, it’s a period of “tremendous uncertainty” for the U.K. and Europe, NPR’s Peter Kenyon reports from London.

The British pound has dropped to a 30-year low against the U.S., and global stock markets plunged as the vote counts trickled in Thursday night and Friday morning. Gold and the Japanese yen went up.

“The EU’s failing, the EU’s dying,” said Leave campaigner Nigel Farage after the official results were announced. Farage said he anticipates the Netherlands and Denmark will follow Great Britain out of the European Union.

In U.K., Elation And Shock

Opinion polls showed a tight race, with the final poll — as well as the betting markets and the financial world — anticipating the U.K. would vote “remain.” That meant for many in the U.K. and around the world, the referendum’s outcome came as a shock.

NPR’s Frank Langfitt says that in London today, people who wanted to remain in the EU are both disappointed and “very surprised.”

“People who wanted out are elated,” he said. “There’s one woman I talked to who actually screamed.

Jeremy Corbyn, leader of the opposition Labour Party, said voters were reacting to decades of mistreatment by successive governments.

“Many communities are fed up with cuts, fed up with economic dislocation and feel very angry at the way they’ve been betrayed and marginalized,” Corbyn said.

Anger over immigration was a potent force among the “Leave” camp, Frank says.

Many voters who opted out of the EU “felt that the price of immigration was just too high, that it was driving down wages, costing people jobs,” he says. “With some white Britons there was a feeling also that the immigration was changing the nature of communities here.”

Many voters also distrusted the experts and powerful leaders urging voters against the Brexit, Frank says:

“The rest of the world, for what it’s worth, was telling the Brits not to do this. Economists almost uniformly were against this, they said it would damage the British economy and the global economy. Political leaders from Xi Jinping in China to Barack Obama said this would make Britain less relevant. But the voters — to some degree, I think, tired of being told what to do by the elites — made up their minds.”

Current EU president Donald Tusk said the group is “determined to keep our unity at 27,” referring to the number of member nations minus Great Britain. He went on to say, quoting his father, “What doesn’t kill you makes you stronger.”