Turning from the tap 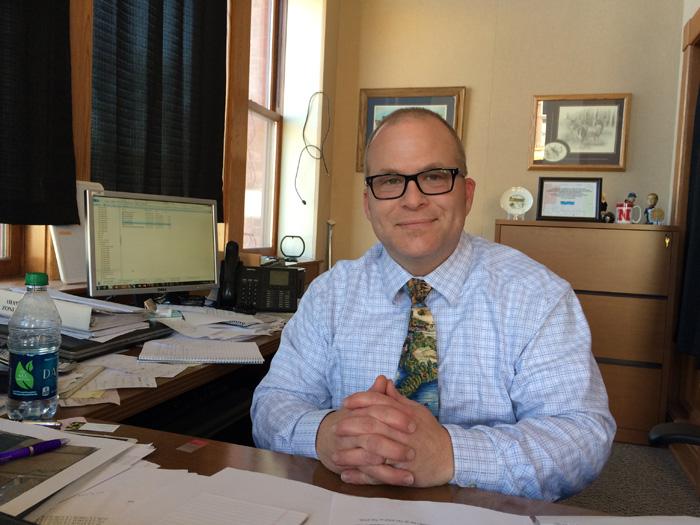 Mike Nichols, city administrator in Hiawatha, says the city is working to secure funding, including federal grant money, to build a new water treatment plant with the capacity to serve surrounding water systems.
Share this story

Natalie Horton doesn’t drink the tap water in Hiawatha. Neither does her 2-year-old son Silas.

She already thought the water smelled and tasted funny. About a year ago, she read a Facebook post from a friend that said the water in Hiawatha wasn’t safe to drink.

“I heard we had nitrates in our water, so now I buy only bottled water,” she said.

Horton, 29, who is beginning work as a certified nurse assistant at a senior care home, said she buys at least two cases of water each month from Wal-Mart in order to avoid the chemicals, which are regulated by the U.S. Environmental Protection Agency and primarily used in fertilizers.

She spends about $4 for each case of 24 plastic bottles, or $8 total. She uses her public food assistance benefits to purchase the water.

“I’m really good about managing our money and buying the necessities first,” she said. “Water is a necessity. Later in the month, I might have to make some choices between other things. But we always have water.”

Horton said last year she called the city’s water department, which told her that the water was safe for most people to drink, with the exception of pregnant women and babies younger than 6 months.

‘A sensitive situation’
Mike Nichols has been the city’s administrator since December 2013.

He has worked in other cities with water remediation projects, including one instance when a business improperly disposed of chemicals, affecting the city’s water quality.

The nitrate situation is more difficult, he said, because there is no single source of the contamination. Nitrates are used in fertilizer in both urban and rural areas, are sometimes naturally occurring or can be found in runoff from animal feeding facilities.

They are often found in especially high concentrations in rural areas with a great deal of agricultural land.

“Unfortunately, the residents in the city and the businesses in the city bear the brunt of the cost,” he said. “It’s a sensitive situation.”

Hiawatha’s water system has been operating under a consent agreement with the Kansas Department of Health and Environment since September 2014 because of high nitrate levels, he said. The city has shut down one of its water wells south of town because of the high levels in that location, he said, and the state must test the water each quarter.

The city is in the process of securing funding, including federal grant money, to build a new water treatment plant with the capacity to serve surrounding water systems, Nichols said.

“I wish we could have fixed it yesterday,” he said. “It isn’t pleasant.”

City staff and elected officials have a hard time distributing factual information and counteracting rumors, Nichols said. A current concern among those in Hiawatha is how the city’s elderly residents might be affected by its tap water.

“KDHE says they aren’t a population at risk, but that information is still going around,” he said.

A frustrating expense
Jennifer Mendez’s doctor told her to avoid drinking Hiawatha’s tap water when she was pregnant with her oldest daughter.

She also used her SNAP benefit to purchase water, regularly hauling home 3-gallon bottles she filled at a filtered tap at a local store.

“It was cheaper for me to reuse my own,” Mendez said. “When you have an infant, you go through a ton of water. I put it in her bottles, and had to use it to wash all the bottles and nipples.

“It’s frustrating, because you are choosing between water and other things. And you still have to pay for the water from the city, but you can’t drink it.”

Mendez’s daughters are now 6 and 4, and she still buys bottled water for her family. She also has purchased a water filter, which makes the water taste better and makes her feel safer. But she’s worried about additional drawbacks.

“Now that I have little kids, I know that fluoride is the best thing for their teeth,” she said. “When kids don’t drink tap water, they’re missing out on all the fluoride that could be helping them.”

Each morning, she said, she fills up a reusable water bottle provided by the parent-teacher association at her oldest daughter’s school. Each child receives a bottle at the beginning of the year, she said, which comes home every night for cleaning and refilling.

Mendez isn’t sure about the source of nitrates or the specific health effects. She said she wished the city would do more about the issue, but she hasn’t spoken with any elected officials about her concerns.

“It’s frustrating, because you are choosing between water and other things. And you still have to pay for the water from the city, but you can’t drink it.” – Jennifer Mendez, whose daughters are 6 and 4

“I know I’m just one person, and sometimes that’s all it takes,” she said. “I don’t even know if it’s just me. People who can afford water probably don’t care. But when people have to pick and choose, it’s kind of a big issue.”

“It’s hardly a packed house,” he said. “Usually there are two citizens who show up for every meeting. I know people have busy schedules, and sometimes the last thing you want to do is to sit through a city commission meeting. But that is another place for people to ask questions and get good information.”

And Nichols has a firsthand understanding why people in Hiawatha are concerned about the city’s water.

“I drink tap water, and our kids are growing up — the youngest is now 4,” he said. “My wife wants a reverse osmosis system. I keep telling her to hold on, we’re building a treatment plant for that. I fight this even at home.”