Truman Med looks to be on cutting edge of cancer research 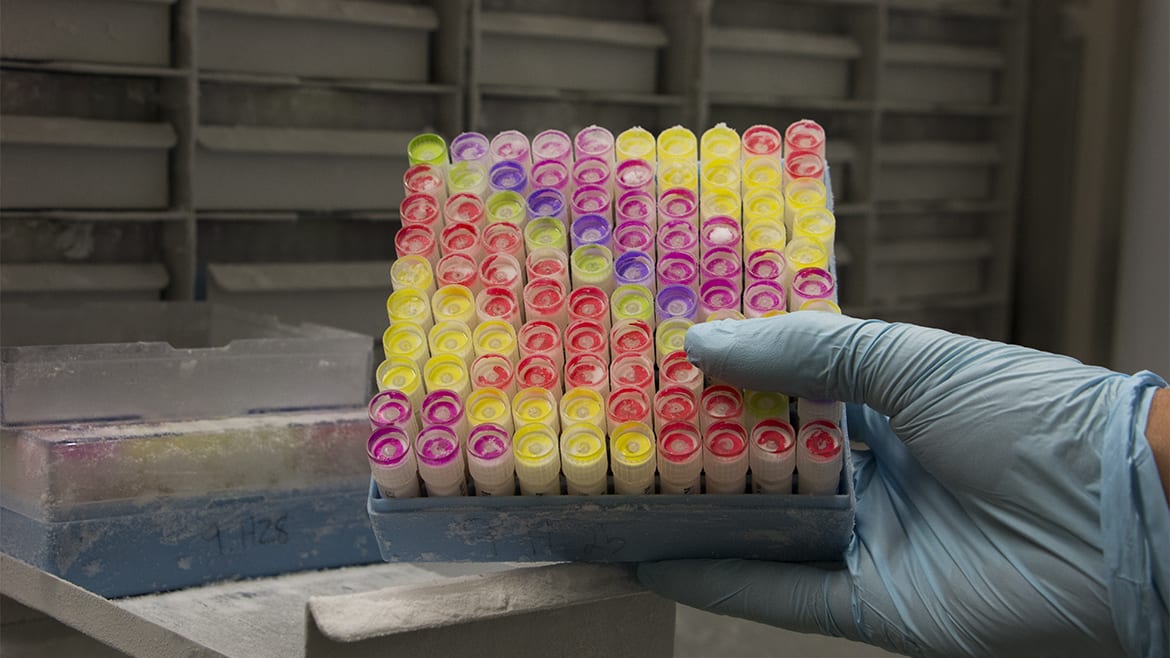 The biobank at the University of Kansas Cancer Center maintains plasma and other blood byproducts for research purposes. Staff stores the samples at minus 80 degrees Celsius. (Photo by Todd Feeback/Heartland Health Monitor)
Share this story

For years, Truman Medical Centers’ chemotherapy unit sat in an open room located in an un-renovated portion of its mid-1970s hospital near downtown Kansas City, Mo.

Only a few feet separated each chemotherapy patient – seated in recliners next to their IV poles – and the ground-floor pharmacy sat several stories below the oncology unit.

All of that changed last year when Truman opened the $6 million Richard and Annette Bloch Cancer Center in refurbished space on the fifth floor of the Hospital Hill Center. The building is across the street from the main hospital at 23rd and Holmes streets.

Measuring roughly 17,000 square feet, the new center is about three times larger than the old unit, with individual infusion areas (each with its own TV), an on-site pharmacy with specially trained oncology staff and a flood of natural light from panoramic windows facing north to the downtown skyline and beyond.

The new center has been open a year now, and Truman officials credit it with helping fuel a surge in business.

“These patients are in a tough situation,” said Dr. Jill Moormeier, section chief for hematology/oncology at Truman and the University of Missouri-Kansas City Medical School, “and it helps for them to be in an environment that is comfortable and welcoming. I think this really has helped with that.”

And thanks to a groundbreaking partnership announced earlier this month with The University of Kansas Cancer Center, one of the clinic’s most significant contributions might take the form of a future research breakthrough.

Just outside the Bloch Cancer Center is a space that’s two or three times larger than a medium-sized conference room. A 60-inch TV screen is among the room’s furnishings, allowing staff to monitor the operating room schedule. 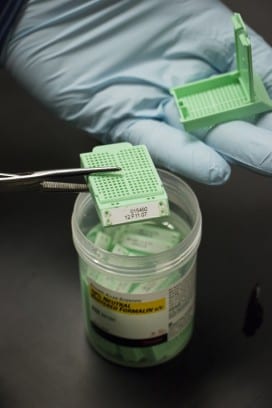 This is the cancer center’s biobank, where technicians process and preserve tissue removed from patients for biopsies, as well as collect plasma and other blood byproducts.

It’s from here that Truman – the first partner in what KU hopes will be a regional biobank organized through the Midwest Cancer Alliance – sends its samples to the larger Biospecimen Repository Core Facility at the KU Cancer Center.

The alliance is a network of 21 hospitals and research centers in Kansas and western Missouri that collaborate on patient care and research.  One key aspect of the alliance is providing patients from throughout the region access to clinical trials.

Biobank samples form the building blocks for researchers who are searching for better ways to prevent and treat cancer.

Scientists call this work translational research, since it moves studies from under the microscope or animal models to humans. One such practitioner is Andrew Godwin, deputy director of the KU Cancer Center and the man who runs the center’s biospecimen laboratory.

Godwin came to KU more than four years ago from the Fox Chase Cancer Center in Philadelphia, which has the “comprehensive” designation that KU is trying to earn from the National Cancer Institute and where over a span of nearly three decades he built a biobank that included about 750,000 samples from approximately 40,000 individuals.

“There are things you can always do in model organisms: You can study certain molecules, how they interact and those sorts of things, “Godwin said. “But when you want to take it to how you are really going to impact patient care, you have to eventually look at clinical samples. You have to look at the organism you are treating, and that is human beings.”

In addition to having dedicated biobank space, Godwin said Truman is a valuable research partner because of the diverse patient population it treats, including a significant number of blacks and Hispanics.

“If I do a test and develop something or make a discovery in a 50-year-old Caucasian woman, it might not translate particularly well to a 25-year old Hispanic female,” he said. “So you always have to have that kind of diversity that represents what you are seeing in the clinic.”

As another example, Moormeier cited an influential clinical trial from the late 1990s that changed the way doctors treated women with breast cancer. Yet practically all of the several thousand participants were white, she said, a less than desirable sample in a country as diverse as the United States. 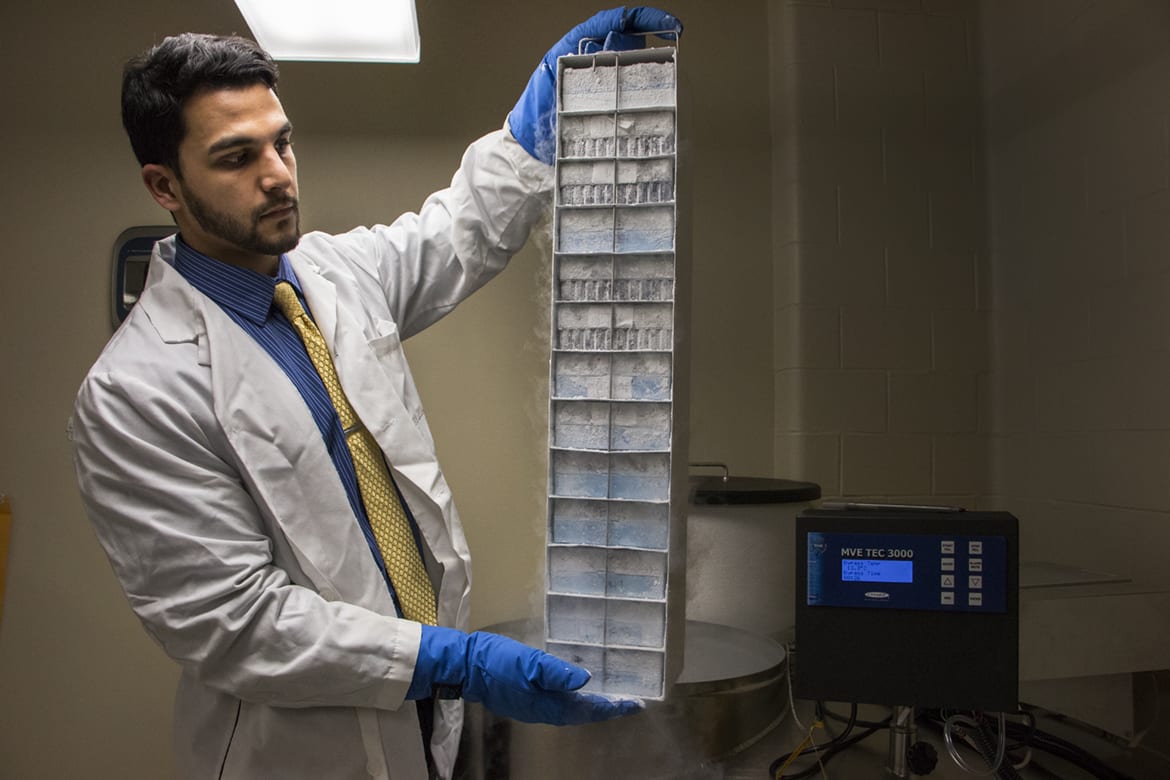 Moormeier also noted that, for reasons that remain unclear, certain cancers, such as multiple myeloma, are more prevalent among blacks. The reason seems to be connected to tumor biology rather than factors such as a lack of access to health care that can be influenced by socioeconomic circumstances.

“The more that we learn about different populations of people,” she said, “the better we are going to be able to provide care to everyone.”

In the first six months of its current budget year, Truman’s cancer center ran about 21 percent ahead of projections, seeing nearly 4,600 patients.

Truman officials attribute that, in part, to the improved patient flow that comes with the larger space. Word of mouth has also played a part, they say.

“We certainly have been contacted by people who wanted to transfer their care now that we are here in an easily accessible environment that they can get to, that is close to their workplace or where they are living,” Moormeier said.

Gregory Duran, 57, of Kansas City, Mo., is a patient who can attest to the differences between the old cancer center and the new one.

Time has gotten away from him some, but he’s pretty sure his initial diagnosis of lung and colon cancer came in 2012. He comes in for chemotherapy every other Tuesday.

With his own TV, Duran can watch his favorite televangelists, rather than the soap operas that some of the older women used to insist on watching on the only TV in the old place (even though he concedes getting a little hooked on “The Young and the Restless”).

But for oncology pharmacist Steve Smith, the ability to talk with patients and their families is one of the most appealing features of the new center – a big improvement from being on a separate floor under the old setup.

He welcomes the opportunity to allay concerns and to answer questions about the medications patients are on. Plus, he said, now the pharmacists are able to have medications ready much more quickly.

“So we really like that and are proud of the fact that we are able to participate in a little more direct fashion in the patient care,” he said.