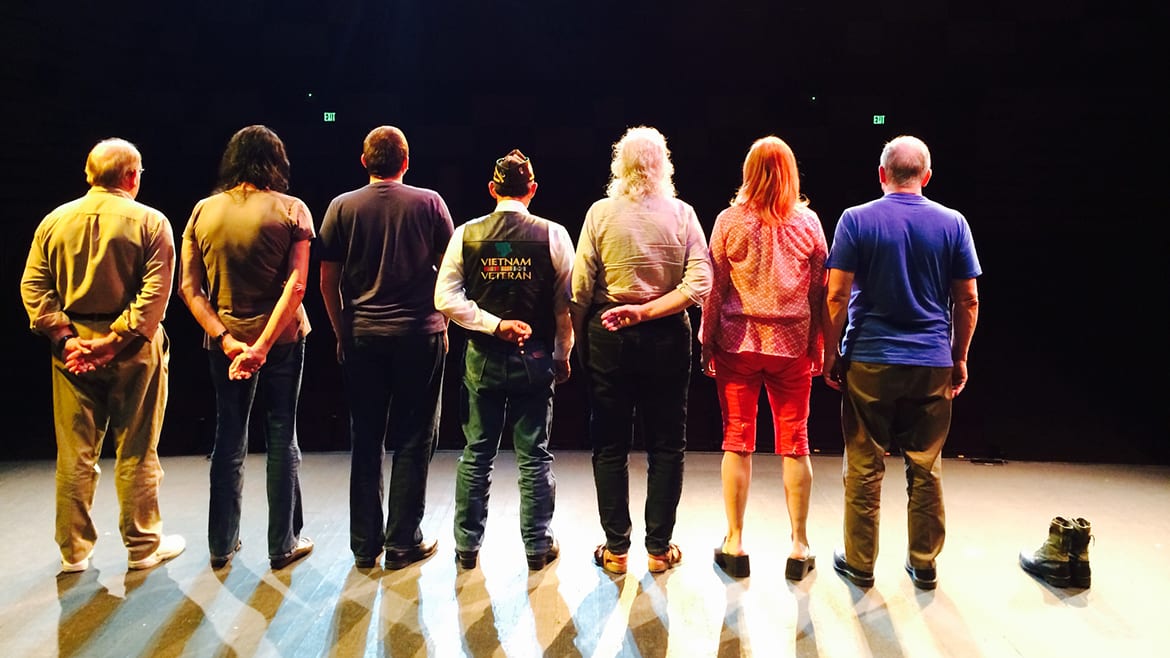 Jonathan Wei can pinpoint the exact moment when he realized that everything he thought he knew about those who served in the military was wrong.

In 2006, Wei was teaching at the University of Oregon and was an advisor to a student veterans group there. One morning while talking with one of his students, who served as a Marine during the first Invasion of Iraq, Wei asked him if he missed being in uniform.

“And he said, ‘I hated every minute of it, but if I weren’t married to my wife right now, I would be back there. I miss it every second.’” Wei said recalling the conversation.

“He crooked his finger next to his eye like he was holding a gun and he said, ‘You know there’s nothing like the feeling of your finger on the trigger,’” Wei said. “And to me all of my sort of liberal bells and whistles went off. You know, ‘Go away, end the conversation, this is going someplace that I am not going to be comfortable with.’”

But Wei asked him to explain, and the student said that he missed serving because, in Iraq, he knew that everything he did was making an impact.

Though Wei had been working with student veterans on service projects to help them feel less isolated on campus, in this moment he realized that the community needed to better understand the experiences of veterans.

As an experiment Wei worked with veterans to share their experiences in the form of a play.

After these first performances Wei started “The Telling Project” to bring the model to other communities. Since 2008 the project has worked with over 160 veterans and military family members to deepen understanding of veterans’ experiences in their own communities.

This fall at the National World War I Museum and Memorial, a group of local veterans and military family members will share their experiences in “Telling: Kansas City.” KCPT will tape these performances and broadcast them around Veterans Day.

Recently Wei shared what he’s learned from veterans as well as what the next year has in store for “The Telling Project.” Wei’s responses have been edited for clarity and brevity.

There is a fairly sheltered notion of the military here in the United States, and that’s only grown in the last couple of decades with the downsizing of the number of people that are actually serving in uniform. We came up with this particular idea, which is driven by performance, because there is a group of people who go to the theater who are actually among the most naive and the most sheltered. And so we wanted to reach out to those folks to start some meaningful conversations, because A) it fits tremendously with the integration of the military people who are living in the community to start those conversations and B) it actually deepens the community’s connection to itself and to itself as a player in the nation at large and, in fact, to itself as a presence in the world.

Does it seem contradictory that you have to create something that’s staged and pre-produced to get this “human” connection?

Things that happen inside of the theater are things that reflect on our reality, but are not really allowed to be spoken about. It’s an interesting trick essentially. We use those theatrical conventions to allow these folks to talk about things that they are actually not really supposed to talk about elsewhere. It gives them permission to speak, it also gives the people who are in the audience permission to sit and listen.

When you watch the news you are expected to have an opinion in relation to these people or these ideas. The theater is not about opinions in that way. The theater is about experience, it’s about presence, it’s reflection, it’s about emotion and as a result what happens in that space is everybody sort of suspends a whole bunch of their normal reactive stuff.

Ultimately what happens with these performances is not so much that people tell stories and we learn things from these stories. What happens is that these stories facilitate these people being human in the presence of their community. And that’s a really profound thing.

It’s very idiosyncratic. All I can tell you is what they have told me. There are a lot of folks who have come up to me afterwards and have said, “That changed my life. That was sort of a watershed (moment). Things were different after that.” People have said that it has opened all kinds of doors for them personally, socially, professionally, but it also just allowed them to let go of certain things. Or it allowed them to embrace certain things…. For some people I think it can be really therapeutic. For others I think it’s a matter of conviction that this is something other people need to understand.

What’s next for The Telling Project?

So we’re actually at a point now where in the next calendar year we’re going 12 productions in 12 different places around the country. So there will be six performances for each production and 72 performances this coming year at least. We’re going to be working with PBS-affiliates on several of those productions.

We’re also putting together a new initiative, which is called the Telling Project Institute, where we are going to be working targeted audiences of decisions makers within a community. In other words, leaders in business, media, politics and education to put on a performance for them. Then we’ll have a series of structured conversations with the cast members and those leaders to come up with five or more focus areas which they will then bring back to their organizations. So whether it’s hiring practices with veterans or public service as a focal point for an organization, essentially what we’re really trying to do is really make the military and their experiences as individuals and as representatives of the nation and the community, presences in terms of how a community finds itself and thinks about itself.

Learn more about “The Telling Project” and its casting call for local veterans and their families here.