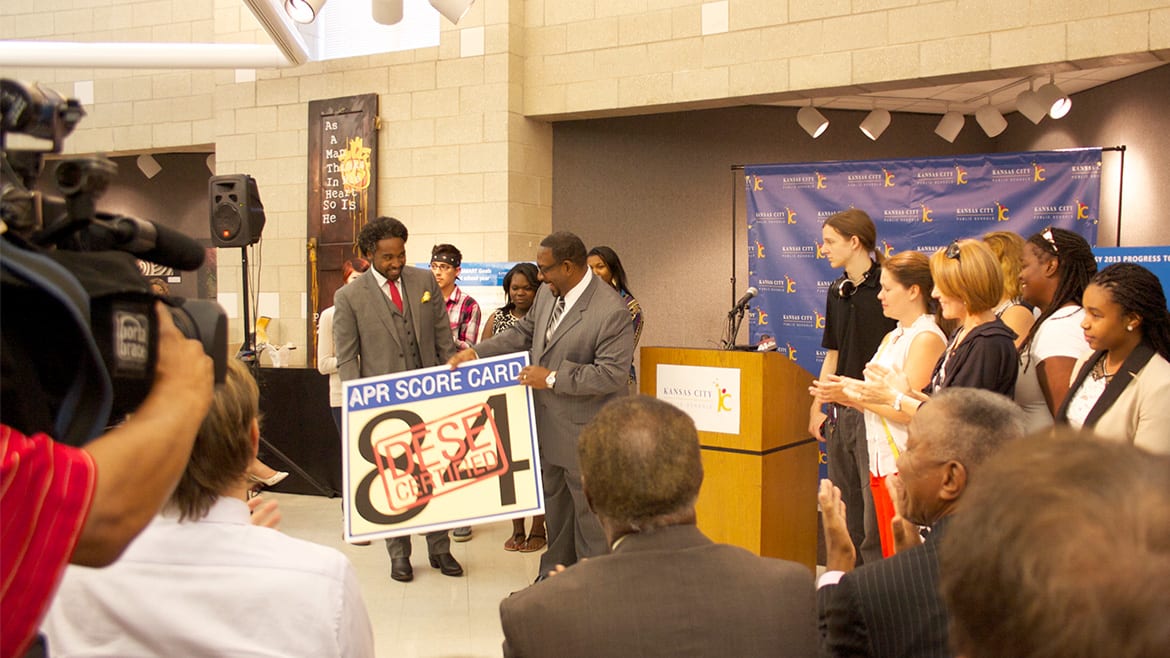 In a press conference at Paseo Academy on Friday, Aug. 23, 2013, Kansas City Public Schools Superintendent Dr. Steve Green declared a renaissance for the scholars and families in the district.

“It was only about 24 months ago in all ways that mattered to the state accountability system that student achievement had bottomed out and was at an all time low in this school district,” said Green to a room crowded with reporters, Kansas City Public School board members and students.

According to the 2013 Missouri Annual Performance Report (APR) released this week, the currently unaccredited Kansas City Public School District has doubled its accreditation score to 84 APR points, or 60 percent.

While this score exceeds the 50 percent benchmark required by the state to receive provisional accreditation, Missouri Education Commissioner Chris Nicastro told the Kansas City Star that the state school board will likely require two or three years of data under current state standards before changing any district’s status.

Green says they plan to appeal to the State Board of Education for provisional accreditation in advance of the three year window.

“I know the question will come up about sustainability,” Green said. “My contention is that last year … we showed progress. We improved in 11 of the 14 standards and we were knocking on the door of provisional accreditation. This year, as you can see, we’ve made tremendous strides. I think that suggests a kind of trend of improvement … I think we bring a pretty strong case and I just hope we’re allowed to bring that case before the state board.”

Green added that it is critically important for the district to regain accreditation this year. If the district remains unaccredited it runs the risk of having to pay the tuition and transportation costs of students that choose to transfer to another district.

The ruling from the Missouri Supreme Court is still pending, but in June it ruled in a similar case that unaccredited districts in St. Louis must pay student transfers costs.

A summary report from the Missouri Department of Elementary and Secondary Education shows that the district made the highest gains in the areas of college and career readiness, attendance and graduation rates. Academic achievement showed a 42.9 percent growth.

“One thing I want everyone in this room to take away with them is that what we accomplished … is not an accident,” Green said. “It was by design, it was very strategic, it was very systematic, it was very intentional and it will be that way going forward.”