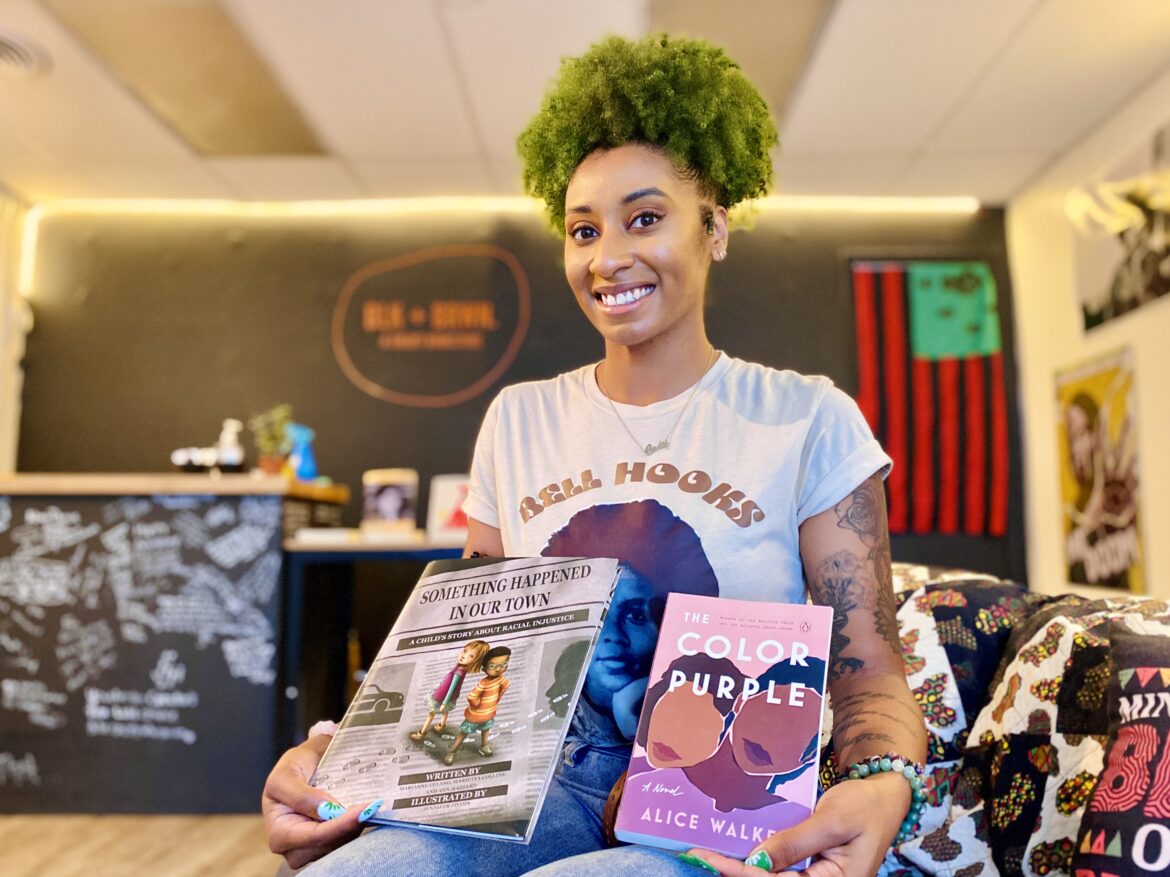 Cori Smith is the owner of BLK + BRWN, a bookstore that elevates and amplifies authors of color. (Vicky Diaz-Camacho | Flatland)
Share this story

It was like any other school day at North Kansas City High School.

On a crisp November day, Grace Cates settled at her desk and cracked open her copy of  “Fences.” Not long after, she and her peers learned the Northland Parent Association (NPA) wanted it banned.

“The book was on the list for no reason,” Cates said. “When that started happening at school, every single student that I talked to was extremely upset.”

“Fences” is a Pulitzer Prize-winning play about Black life in the 1950s. It is considered an “unflinching look at the African American experience in the (20th) century” by the Kennedy Center.

But parent groups like NPA consider books like it that focus on race issues divisive. More of these groups have banded together on social media, pulling up PragerU resource guides and sharing language parents can use to protest what their children are allowed to access.

Jonathan Friedman, PEN America director of free expression and education programs, a free speech nonprofit, says challenges have been on the rise.

“What started as maybe one or two parents filing complaints in detailed fashion about books has turned into long lists of books that a school district receives with demands that they be removed,” Friedman said.

Across the nation, school librarians have faced a tug-of-war about what to pull and keep on shelves. Most recently, removals were prompted by Missouri Senate Bill 775, which bans “explicit sexual material” on school property.

The Missouri Association of School Librarians, aware of the difficulty librarians in public libraries as well as in public and private schools may face, provided preliminary guidance. The association pointed to a potential exemption from the bill’s requirements, “if considered artistic or informational in nature.”

Though NPA formed roughly one year ago, the group has been present and vocal in school board meetings and online.

Fiery debates have continued to dominate school board meetings, as some book-ban advocates land school board seats and power to shape curriculum.

In April, that almost happened at North Kansas City High School. During a school board meeting, Northland Parent Association President James Richmond presented a few coming-of-age books. Armed with poster board-size images, he pointed to images of the book “Fun Home,” which he said was too explicit for teens to read.

The plan, Richmond added, was for the group to review 28 other books in the school system.

After he complained, North Kansas City High School temporarily pulled some books off shelves for review, before later returning them.

Like similar parent groups that skew conservative cropping up, it has opposed mask policies for children during the COVID pandemic and protested against the curriculum that included lessons on LGBTQ, gender identity, history and other issues.

They claim queer, coming-of-age books “groom” children. They raise false concerns that Critical Race Theory is taught in K-12 classrooms. Citing SB 775 on their Facebook posts, they encourage parents to report “pornographic material” to school administrators, board members and leaders.

To Cates, the books – namely “Fun Home” – are not pornographic but rather an educational resource that fulfills a need not met by Missouri education.

“High schoolers are 100% mature enough to be able to read content that has sex in it. And I think it’s ridiculous to assume that they’re not,” she said. “We are taught abstinence only.”

In Missouri, the state requires schools to teach health education and defers to school boards or districts to determine what specific sexual health topics are included. Sex health education classes are either limited to certain topics such as abstinence or dangers of pregnancy, or focus on the risks of contracting STDs and HIV.

Facts about Sex Education in Missouri:

Reported teaching about the benefits of being sexually abstinent

Reported teaching how to correctly use a condom

Reported teaching about methods of contraception other than condoms

Librarians and teachers are the experts, Cates added. So she believes parents should defer to their expertise to guide their choices.

There’s another side to the NPA coin. She learned last December that one NPA member, Ryan Utterback, was arrested and charged in December 2021 with child molestation and presenting pornographic material to a minor.

Utterback had vehemently pushed back against “All Boys Aren’t Blue,” a book about the Black queer experience. He believed that content should be taught at home.

Author George M. Johnson, a Black queer man, said in a Time Magazine interview that he wrote a book that he wished he could have read.

“And I am using my story to teach kids about the mistakes that I made the first time that I was having sex, so they don’t make those same mistakes.”

Among the books on the ban list, school librarians, educators and their pupils noticed a pattern. Most were authored by or for LGBTQ+ folks, women or people of color.

The new state law spells trouble for librarians. They are the first line of defense in checking books out to youth.

“This really came out of nowhere. It felt like it was language being added to a bill at the last minute,” said Cindy Hohl, treasurer of the Freedom to Read Foundation and director of Kansas City Public Library’s branch operations. “Unfortunately, it criminalizes the profession.”

Hohl says unhindered access to books is a vehicle to build understanding. The fuel is imagination and education.

Point blank, she said, librarians don’t censor. Her professional goal is to ensure that the books lining the shelves in schools and in public libraries are inclusive and represent every person and every experience.

“This is someone’s reality, this story matters,” Hohl said. “Narratives belong in every community.”

That is precisely what Cori Smith, founder and owner of BLK + BRWN, set out to amplify. Smith opened her shop in a walkable area on W. 39th Street, near a bus stop.

Smith believes access to books breaks down bias and builds understanding. She grew up reading works by authors who looked like her.

“I am someone who’s always found safety in literature,” Smith says.

Before she was a bookstore owner, Smith tried law school for a year. Then she worked in the Kansas City Public School District. She was a coach and a mentor to kids in the city. Their conversations stuck with her.

These kids recognized authors like James Baldwin or Toni Morrison but had never read their work. That surprised Smith because growing up, she recalled reading Zora Neale Hurston’s writings, expecting those books to be taught in class.

In each page she turned and every word she read by Morrison, Baldwin and Hurston, she found affirmation and belonging. But in school, she read famous literature that made her uncomfortable. “To Kill a Mockingbird” came to mind. She questioned reading aloud and doing the work for people who didn’t look like her.

Stories that detail the marginalized experience are important, she said.

“A lot of the books that are challenged are books that paint, not the most beautiful lives all the time, but that’s real,” Smith said.

“The magic of books is you will find a book that can speak to you. When we see these books that give these words and give these stories and share these perspectives, the hope is that it expands our minds.”

To cut through the noise of debate, she sees a need for dialogue.

During Banned Books Week from Sept. 18-24, the shop will put together a box with two banned or challenged books with educational material on why. Though the program can only afford to provide 10 boxes, the goal is to mobilize community discussions around current and past banned books.

Historically, the publishing world has elevated works of white authors, and white stories. In the past several years, authors from marginalized groups have spoken up about being excluded, be it in publishing circles or being paid less than their white counterparts.

Their stories of violence, pain, trauma and at times sexuality are considered taboo, Smith says, whereas books such as “Animal Farm,” “Hamlet” and “Lord of the Flies” are given the OK.

Her approach is simple. She asks folks who support removing certain books off library and school shelves a simple question: Why?

She thinks there’s a bigger conversation to be had.

“If we are too busy silencing the experiences, then we are missing giant opportunities. Exposure fosters the opportunity to form an opinion,” she added.

From the librarian’s perspective, Hohl says consumers of most media don’t always love everything they watch on TV or what they hear on the radio. However, they have free reign to choose what to or what not to consume.

The same should go for books, she says.

Friedman agreed, adding: “The real challenge right now is getting people to talk and listen to each other.”

Last fall, as cascades of complaints filed in, students mobilized and formed clubs to have a say at school board meetings. Cates said before then, student voices were not represented. But since she graduated, students who were once afraid of public speaking formalized a club against censorship partnering with the National Coalition Against Censorship.

Cates, who is now an undergraduate in college, says her Gen Z peers aren’t backing down. They want to read and talk about the issues that affect them to learn how to navigate the world.

They are invested more than adults might think, she said. She’s proud of the clubs she helped form so that now, the school board will know what they need, loud and clear.

“It just goes to show that we’re very dedicated, and we’re very passionate … for the greater good for our community,” Cates said.