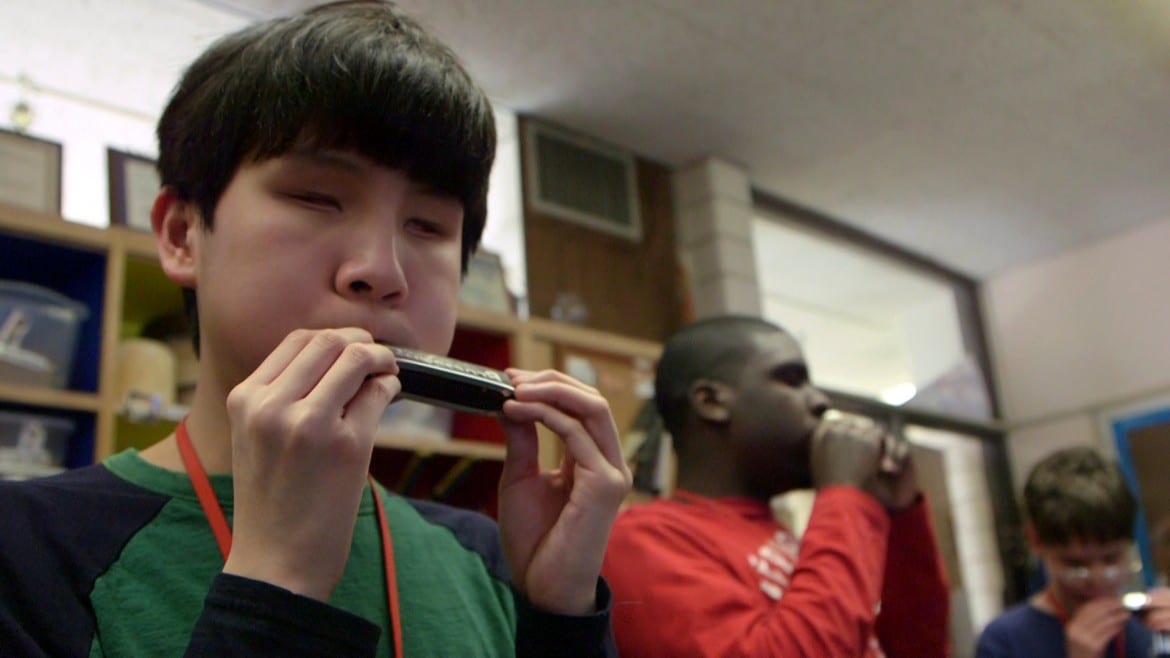 Gabriel Lewis carefully ran his fingers over the edges of the small box before he took out the shiny, chrome harmonica inside and took a big breath to make the first notes.

Lewis is one of 40 students at the Kansas State School for the Blind that received a new harmonica courtesy of the instrument’s manufacturer Hohner.

“This is an ear instrument…” said Phil Duncan, helping students figure out how to hold the harmonica correctly. “I can’t see it any more than you can, because when it’s in my mouth, guess what I can’t see? My harmonica.”

Duncan knows a thing or two about teaching people to play the harmonica.

During his time as a music teacher in the Park Hill school district, Duncan taught thousands of students to bend and riff.

He also literally wrote the first book on how to play harmonica for Mel Bay in 1979 and will publish his 35th guidebook for the instrument this year.

When Duncan learned that the school and the non-profit Accessible Arts were working to expand music therapy classes for students, he simply called up Hohner Inc.

“I talked to them, and I said ‘You know, we’ve got some folks over here in Kansas that would really appreciate —  the word is big on appreciation — some harmonicas so they could learn how to do this,’” Duncan said to students.

Matt Mitchell, 17, was the only student to know about the musical surprise.

Mitchell received his first harmonica over eight years ago, just before he lost his vision due to an operation to remove a brain tumor.

Through just practicing on his own and listening to YouTube videos of others playing, Mitchell has essentially taught himself to play harmonica and other instruments.

“I really think it’s pretty tactile,” Mitchell said. “Knowing where the holes are and how hard to blow. I really think I am more sensitive because of my vision loss… I think there is something to being blind with some of those kinds of instruments.”

There is research that indicates a strong link between musical talent and blindness.

In a 2010 study by the Institute of Education, London, with about 40 blind children, their parents and teachers, it was found that blind children are 4,000 times more likely to have perfect pitch than their non-visually impaired peers.

After he lost his vision, Mitchell said that his appreciation for music and art that helped him express himself skyrocketed.

Mitchell said that, in addition to playing piano and the drums, he loves experimenting with a myriad of other art forms.

“That’s my fun time, whether it’s carving, writing poetry, drawing, sculpting, whatever, it all really just kind of lets me go, and I just absolutely love it,” Mitchell said.

Luckily for Mitchell and his fellow students, in the last seven months, Accessible Arts, which has been on the KSSB campus since 1988, has gone from offering one after-school program to eight classes during the school day.

“Just seeing the spark ignite in each student…. It’s really really nice just seeing them find that niche interest, and they just go with it,” Bryant said.

The students will be working with their music teacher throughout the spring to learn more about playing their new harmonicas.

Mitchell hopes that Lewis and his fellow students will find playing the harmonica as exciting and meaningful as he has.

“You’ve got to have some way to let out those emotions that are absolutely impossible to come close to even reaching with words,” Mitchell said. “So I guess I hope they really learn to have fun with it.”