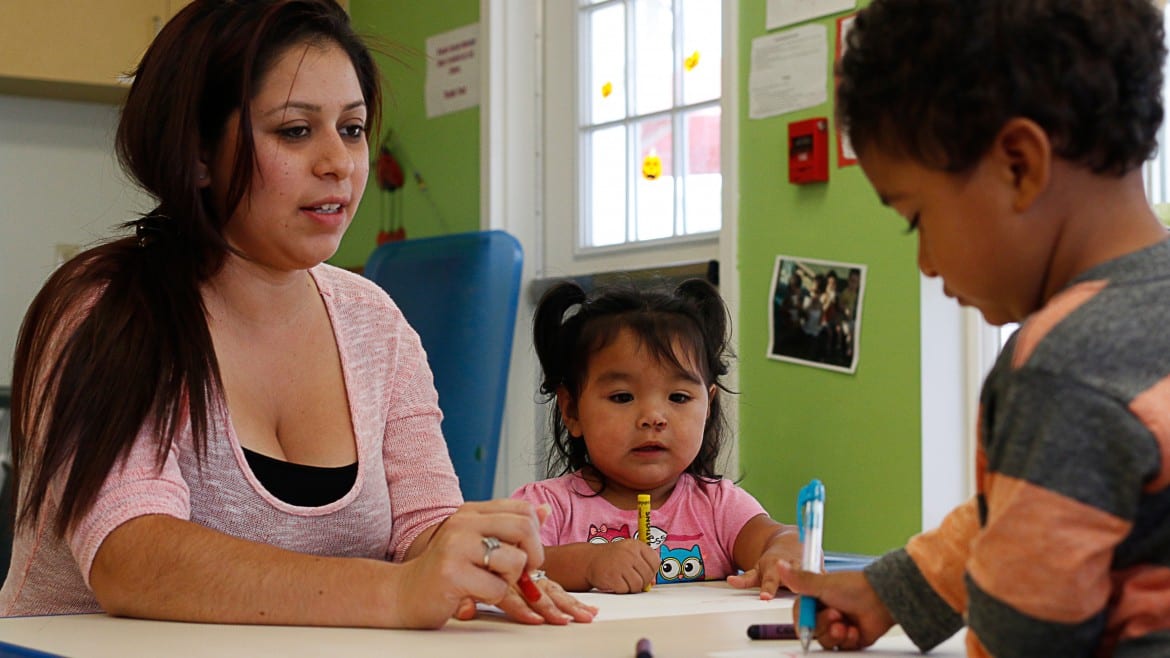 Brenda Jones, assistant teacher, works with Camila Meza-Luna, 2, and Jason Spencer, 2, in a classroom at TOP Early Learning Center in Wichita, part of the Child Start program. Child Start officials decided not to reapply for nearly $1 million in Early Head Start funding because of difficulties dealing with a state agency. (Photo by Kevin Brown)
Share this story

One of Kansas’ largest early childhood development programs has decided not to reapply for nearly $1 million in Early Head Start funding because of difficulties dealing with a state agency.

“This wasn’t something we wanted to do,” said Teresa Rupp, longtime executive director at Child Start, a Wichita-based program that provides Head Start and Early Head Start services for 981 low-income children in Butler, Cowley, Sedgwick and Sumner counties.

The decision, Rupp said, was driven in large part by Child Start’s increasing frustration with auditors from the Kansas Department for Children and Families.

“Things just got to a point where we were having to spend more on administration than we used to and less on the children than we used to,” she said. “It’s very unfortunate.”

[row class=”row-fluid”][col class=”span8″]The funding — $949,392 for this state fiscal year — had been used to finance full-year services for 90 children, from birth to age 3. Those slots are now gone, Rupp said.

The 90 eliminated slots had been financed primarily by a federal block grant administered by DCF. The remaining 164 Early Head Start slots are funded under a different arrangement with the Office of Head Start in the U.S. Department of Health and Human Services.

Rupp said that in August 2013, two DCF auditors spent almost a week at Child Start “looking at every transaction, every quart of milk, every drive across town, every individual’s time sheets documenting where they spent every hour and what they were doing every hour.”

The auditors, she said, cited Child Start for using its van to transport Head Start and Early Head Start children at the same time without differentiating the mileage.

Rupp said the new level of state scrutiny was unprecedented.

“We go through an independent audit every year that’s in accord with our federal grant guidelines. That means it’s a financial and a programmatic audit,” she said. “And, on top of that, our programs get reviewed every three years by teams of federal reviewers, looking at more than 3,000 requirements specified by Head Start Performance Standards.

“We are not always perfect, but we have had no significant findings of non-compliance, absolutely no financial irregularities and no significant deficiencies cited in the last 20 years,” said Rupp, a Child Start employee for the past 34 years.

In January, DCF sent a draft report, putting Rupp on notice that based on the audit findings Child Start should be prepared to pay back almost $85,000.

“Most of it had to do with them saying we spent more on salaries than we’d originally budgeted,” Rupp said. “And that’s true, we did. But you’re allowed to do that as long as you notify the state and get permission, which we did. We called DCF and asked if there was a form we needed to fill out, and they said no, that as long as we let them know, that was enough.”

But the DCF auditors, she said, “denied the whole thing” because Child Start didn’t have any written indication from the agency that it had approved the additional salary expenditures. DCF and Child Start have been haggling over their differences ever since.

Rupp said Child Start’s strained relations with DCF played a “significant” role in the decision to forgo the nearly $1 million administered by the state.

“We just felt like this (audit dispute) was something that wasn’t going to go away, and that we’d constantly be put in a position of providing services that we wouldn’t be reimbursed for because, frankly, the state is broke,” she said. “That … and the level of scrutiny was just nuts.”

Theresa Freed, a DCF spokesperson, said the change in audit polices was driven by the department’s “obligation to Kansas taxpayers to ensure that funds are being used as intended — for the benefit of children.” The audits, she said, were not “intended to penalize our community partners/grantees.”

DCF, she said, changed the scope of its audits in December 2011 as part of an effort to “promote accountability and deter potentially fraudulent activities” among the department’s network of providers. She didn’t say what led state officials to be concerned about potential fraud in the state’s Early Head Start programs.

However, she did say that federal officials shared DCF’s concerns and endorsed tighter scrutiny of the Early Head Start grants.

Asked if federal officials had put their concerns in writing, Freed said the sentiments were expressed during a telephone call. “It appears there wasn’t a formal report,” she said.

Freed said DCF auditors are checking to see if there is an email record of federal officials’ concerns.

About 10 years ago, there was concern that a significant number of Head Start programs across the country were underperforming and were not well-managed. Those concerns stemmed from a U.S. Office of Government Accountability report that said HHS was not adequately monitoring the finances of some Head Start programs and was slow to terminate grants to troubled organizations.

The GAO report led to major reforms when Congress reauthorized Head Start in 2007. Among other things, the reauthorization legislation required “low-performing” Head Start programs to compete for renewal of their grants.

Erick Vaughn, director of the Kansas Head Start Association, said he wasn’t aware that federal officials had current concerns about any of the 28 programs the association represents, including the 13 Early Head Start programs funded in part or in whole by more than $10 million in DCF-administered grants.

Vaughn said Child Start’s experience with the DCF auditors is not unique.

“Everyone is fine with being audited and with DCF asking questions,” Vaughn said. “No one objects to being held accountable, but so much of the focus seems to be on recouping dollars rather than on conducting audits. It kind of makes you wonder what’s really going on here.”

The audits have focused on the grant monies received in state fiscal year 2012, which ended June 30, 2012. Of the 13 Early Head Start programs that received a DCF-administered grant, 12 have received draft reports and one is still pending.

Collectively, Vaughn said, the 12 programs have been told they likely will have to pay back approximately $650,000.

He called the initial assessments, which are not yet official, “ridiculous,” noting that all 13 programs have passed federally required independent audits.

Some in the Head Start community have speculated that the higher level of state scrutiny is somehow connected to the Legislature’s rejection of Gov. Sam Brownback’s 2011 proposal to eliminate state funding for Early Head Start. The governor wanted to free up money for an initiative to improve fourth-grade reading scores and to increase child-care subsidies for low-income families, many of which were headed by single working parents.

However, DCF’s Freed said the change in audit procedures was not related to the Legislature’s rejection of the governor’s proposal. She says the governor’s office has played no role in the audits.

Some of the state’s Early Head Start directors aren’t convinced.

“I don’t know that anybody is saying there’s a connection between the governor’s wanting to eliminate Early Head Start and the audits that have been going on for the past year and a half,” Vaughn said. “But it does seem a little odd that they’ve been hitting the programs as hard as they have and in a manner that, for some, seemed like a witch hunt.”

DCF polices, Freed said, prevent department officials from commenting on any of the Early Head Start audits until after final reports have been issued to all 13 programs, a process that’s expected to take at least three more months. All 13 final reports will be released at the same time.

Once that’s done, Freed said, a panel of DCF officials will decide whether to require that the programs repay all or some of the money deemed to have been misspent. The panel’s decisions will be subject to an appeal process.

‘Not a happy camper’

Tawny Stottlemire runs Community Action, a Topeka-based anti-poverty program that manages the Head Start and Early Head Start programs in Shawnee County. She said her agency received a draft report in May that says hundreds of thousands of dollars in funding might be withheld because some job titles had been changed without notifying the state.

“We’re talking about the same people with the same responsibilities, working the same hours with the same funding stream — but with different titles. And they were all disallowed,” Stottlemire said.

Since then, Community Action’s finance department, she said, has spent hundreds of hours and thousands of dollars refuting the finding.

“We think it may be down to around $80,000,” Stottlemire said. “But we don’t have anything official from DCF. We’re still negotiating. We’re still trying to find our way through this maze that the state has created. It’s incredibly difficult.”

“These are federal dollars, so the administrative requirements and the quality demands are really intense, which is why a lot of really good child care providers choose not to do it,” she said.

Steve Lohr runs the Girard-headquartered Southeast Kansas Community Action Program, which receives the most DCF-administered funding of any of the 13 Early Head Start programs: $1.7 million. The grant underwrites Early Head Start services for 182 children in some of the lowest-income counties in the state.

“We don’t have our draft letter yet, so there’s not a lot I can argue with at this point,” Lohr said.

But Lohr said he’s let it be known that he “won’t be a happy camper” if DCF tells the Southeast Kansas program that it has to pay back any of the money it received in 2011 and 2012.

“In the 35 years that I’ve been here, we’ve passed all kinds of local, state and federal reviews,” he said. “I think if John Q. Public were to come in and see all the reporting systems we have in place, he’d shake his head in disbelief.”

Head Start and Early Head Start provide services to promote early childhood development and help parents — almost all of whom are living in households at or below the federal poverty level — become better providers and caregivers.

Head Start was founded as part of President Lyndon B. Johnson’s War on Poverty in 1965. It has served more than 30 million children since then. Early Head Start started in 1995 during the administration of President Bill Clinton.