Shrimp Grown In Tanks Make A Splash, Coming To A Market Near You 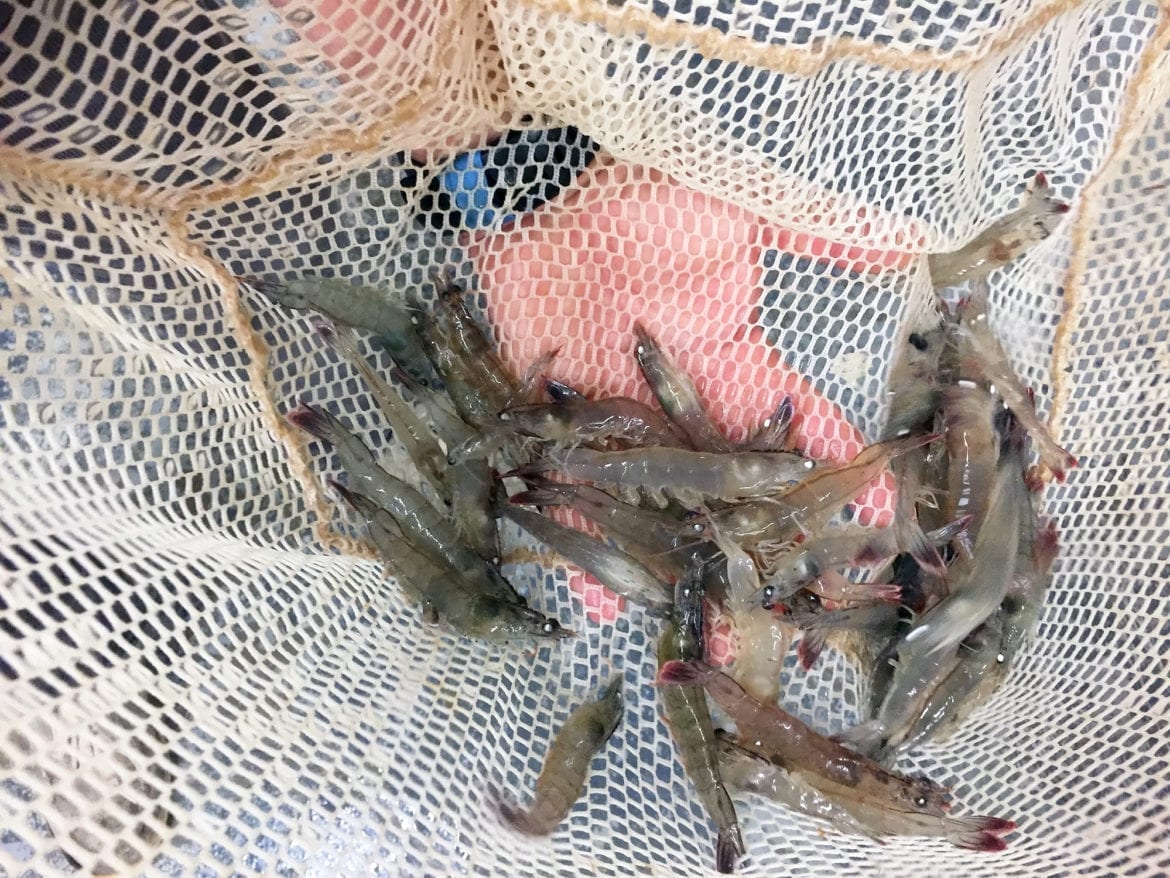 Pacific white shrimp raised in Eco Shrimp Garden's indoor aqua farm in New York's Hudson Valley, which owner Jean Claude Frajmund describes as a spa for shrimp. They grow for six months before they're ready for harvest.
Share this story

We import about $5 billion worth of it from all over the globe, including from India, Thailand and Indonesia.

But over the past year, we’ve learned more about the downsides of global shrimp production. The AP uncovered slave labor in Southeast Asia, and there’s also documentation of environmental degradation from destruction of mangroves.

Perhaps this helps explain the success of a new kind of boutique shrimp operation in New York, called Eco Shrimp Garden. Here, a variety known as Whiteleg Shrimp, or Pacific white shrimp, are grown in indoor, circulating tanks. If you listen to the audio with this story, you’ll hear me touring the Eco Shrimp farm, which is housed in a renovated factory in Newburgh, N.Y., about a 90-minute drive from Manhattan.

As I stepped inside, I felt as if I’d arrived in the tropics. It was so humid and warm, my iPhone temporarily stopped working. Proprietor Jean Claude Frajmund has created his own, indoor mini-ocean. I’m surrounded by 84,000 gallons of water.

We peek inside one of the tanks — which look like above-ground kiddie-pools — and he fishes out a baby shrimp. “You have to feed these, like, eight times a days, like a baby,” Frajmund tells me. They’re fed a diet of fish meal (sourced from the U.S.) and bits of animal proteins that are leftover from poultry production. They grow for six months before they’re ready for harvest.

It may sound like an odd set up, but it turns out to be a sustainable way to produce this type of shrimp. The Monterey Bay Aquarium’s Seafood Watch program gives this shrimp its “Best Choice” ranking.

Frajmund says his aqua farm is almost like a spa for the shrimp. They’re well-fed and cared for, have no predators, and there’s no pollution.

Frajmund sells his shrimp at the Union Square Greenmarket in Manhattan for about $25.00 a pound, depending on the size. That’s a hefty price tag, but he’s found a loyal customer base.

“It’s local, it’s sustainable — and the flavor is really great. So it’s worth the value,” says shopper Celia Cheng, who is a food blogger.

The appeal here is the freshness. Frajmund’s customers are scooping up shrimp that were alive just a few hours ago.

He squeezes off the head of a shrimp before popping the body into his mouth. ‘It’s sweet with a little brine — tastes great,” Hoffman says.

Hoffman helped pioneer the farm-to-table approach and has operated several restaurants in New York. He says he had grown leery of putting shrimp on his menus after reading about all the problems linked to shrimp production. With Eco Shrimp, he knows exactly what he’s buying and where it came from.

On the morning we caught up with Frajmund, he’d sold his last shrimp by mid-morning. As his last customer paid, he asked her to ring a bell. “Sold out!” he shouted.

Currently, he’s in the process of doubling his production — to about 300 pounds of shrimp per week — by adding more tanks. “Demand is great,” he says.

Across the country, Frajmund seems to be part of a growing trend.

“The feedback we receive is that consumers cannot get enough of domestic farm-grown shrimp and are willing to pay a significant premium for high-quality fresh product,” Browdy says.

Frajmund says he grew up hundreds of miles away from the coast, and fresh shrimp was hard to come by.

Now, he says he can imagine a shrimp operation like his in every city.