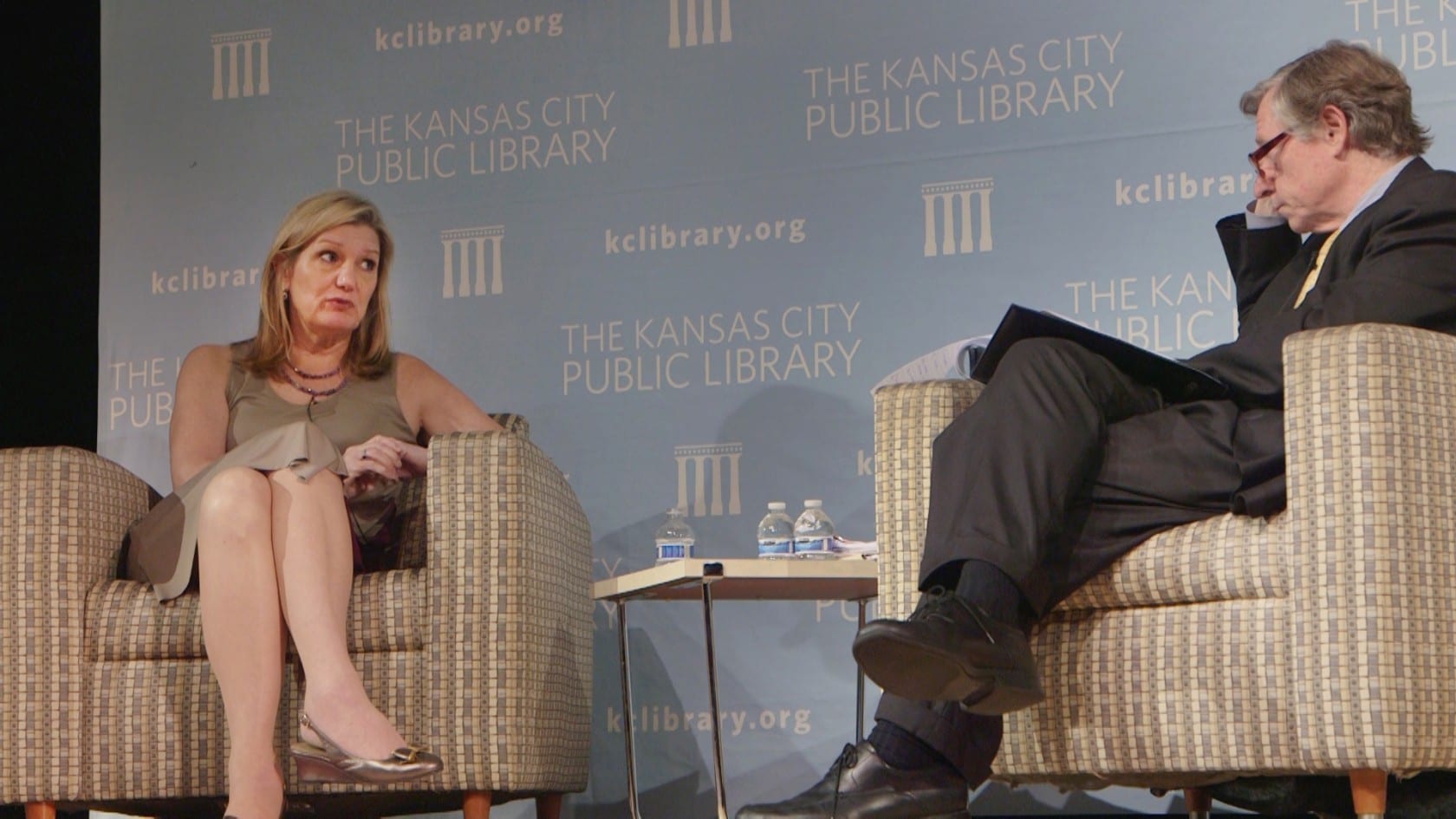 A study published in June labeled teacher education programs at colleges and universities across the country an “industry of mediocrity.” Only four out of the 1200 elementary and secondary teacher preparation programs included in the Teacher Prep Review received top ratings.

Kate Walsh is one of the authors of the study and the president of the National Council on Teacher Quality (NCTQ), which is a research and advocacy group based in Washington, D.C.

Walsh is touring the country to present the study’s findings, and on July 30, 2013 she gave a presentation at the Plaza Branch of the Kansas City Public Library.

The study has been widely condemned for its methodology, which relied on reviewing documents like syllabi, textbooks, course requirements and admission policies to determine whether education programs at universities are adequately preparing future teachers.

In conducting the study, NCTQ did not visit campuses, survey graduates of programs or the schools that hire them. This document-based approach troubled Missouri Western State University assistant provost Dr. Cindi Heider.

“It’s like going to a restaurant and looking at the menu without trying the food,” said Heider in a June 18, 2013 story in the St. Joseph News-Press.

While Walsh recognizes the limitations of not visiting campuses, she says they learned what they needed through document-based review.

NCTQ’s study was inspired by the Flexner Report, a scathing review of medical schools published in 1910 that is credited with revolutionizing medical education.

“He rated [all of the medical schools] and he found only one out of 155 that was any good. That was Johns Hopkins,” Walsh said. “So a lot of people have said we need to do something like this for education schools and they thought it would be impossible because believe it or not this nation has 1450 institutions that train teachers and inside each of those institutions are multiple, multiple programs.”

Dr. Rick Ginsberg, Dean of Education at the University of Kansas, says that NCTQ’s teacher preparation ratings are not comparable to the extensiveness of the Flexner Report.

“What Flexner did is he personally went and visited every medical program in the country and collected data on them,” Ginsberg said. “We’re not getting that kind of review here from NCTQ; they’re reviewing documents and syllabi.”

When asked to participate in the study in 2011, Ginsberg said he and other deans had major doubts about whether or not the study would be objective.

“NCTQ had been involved in some contractual studies in other states … and in each instance we in the field were hearing that these were not particularly well run or objective kinds of studies,” Ginsberg said. “We listened to some of their [introductory] webinars and they started off by saying teacher preparation is broken and it’s no good … well how objective is your study going to be when you start off with that as your conclusion?”

The Battle for Documents

In 2011 the NCTQ sent 1,139 requests to universities across the country for data for the study. Only 114 institutions willingly cooperated.

When the overwhelming majority of universities did not respond or share data, NCTQ filed 1,650 open records requests. Walsh alleges that universities in Kansas, including the University of Kansas, asked for unreasonable fees for providing documents.

“You are allowed to charge the person asking a reasonable fee for collecting the documents and copying them,” Walsh said. “So when we got some of the fees back they were five times higher than any we were getting from others around the country.”

Ginsberg says the disparity in fees comes from how easily each institution is able to collect the documents and data being requested. He says that in KU’s case they calculated a bill based on the number of hours it would take to collect information for the request and the hourly rates of the various staff involved.

The University of Missouri System argued that syllabi and course materials were intellectual property and not subject to open records requests.

On July 17, 2013 the Circuit Court of Boone County sided with the University of Missouri System.

“The judge at the district level didn’t agree with us and so we will be appealing that decision,” Walsh said. “And we’re confident with a solid understanding of federal copyright law that the right outcome will be achieved.”

NCTQ submitted an appeal on August 22, 2013, but as of this writing a court date has not been set.

The University of Missouri System declined to comment given the pending nature of the lawsuit with NCTQ.

To obtain some of the documents they wanted, Walsh said NCTQ also used “investigators” to track down syllabi and other course information.

“We have a team of full-time people whose job it is to do nothing but get in touch with students on college campuses and ask them for materials,” Walsh said.

Ginsberg said that KU’s School of Education received numerous calls and emails from people asking for copies of course syllabi pretending to be current or prospective students.

“They had people calling us, [saying that] they were our students,” Ginsberg said. “And we would say ‘okay what classes are you in? Come in and see us and we’ll give you whatever you want,’ but they weren’t here, they were located in Washington, and one guy was located in Texas.”

Due to the lack of willingly data provided, NCTQ rarely was able to rate a university program on all 18 of the standards they created for this review.

Even with missing data NCTQ still assigned overall scores to most programs, and both Walsh and the language in the report itself maintain that the study is exhaustive and unprecedented.

On page 13 of the study the authors wrote, “…We were unable to apply all relevant standards to all programs, as we were derailed by widespread non-cooperation by institutions. That is unfortunate for many reasons, but it should not make our findings any less meaningful or representative.”

“The history of all of their reports is everybody – except for a couple – gets C’s, D’s, and F’s,” Ginsberg said. “Do I believe there are only four good programs? Are you out of your mind? That’s just not fair.”

NCTQ’s findings for certain teacher prep programs are very different from past studies like education researcher Arthur Levine’s 2006 Educating School Teachers and the more recent study by the New York City Department of Education that focused on how well teachers were prepared by school in the state.

For example, in his study Levine distinguished Emporia State University (ESU) as one of the leading teacher education programs in the country because of its three-tiered admissions process, relationships with nearby public schools, and extensive clinical program.

Ultimately, Walsh says the standards and focus of the study come from what public school educators and superintendents say they need from teacher preparation programs and is meant to address higher education’s lack of responsiveness to those needs.

Green says he was an early supporter of the conduction of the study so that it could add to the body of literature on the importance of teacher preparation.

“I’ve been in education for 37 years and there’s always been an articulation challenge between higher education schools of education and public schools,” Green said.

At the time of his interview, Green had not yet read the study. He says the district has a good relationship with universities in the area that supply student teachers and new hires.

“I think they listen well and we constantly provide them with feedback on where additional reinforcement and support can be given,” Green said. “KU does a very good job of following up on how their graduates are doing in our district.”

Green acknowledges, however, that there are a lot of variables at play when it comes to preparing teachers for “the field.”

“In most cases I think [teachers] come in pretty well equipped,” Green said. “But it depends on the individual, on the school district, and sometimes the individual school in terms of what’s going to be expected for a teacher to be successful. It’s not a perfect formula.”

Ginsberg agrees that there certainly is room for improvement in teacher preparation, but that the bleak picture painted by the NCTQ study is not an accurate one.

“The bottom line is, if we were able to go back and perhaps this was approached in a way that didn’t say, ‘you’re all bad and thank God we’re coming in on a white horse to make you better,’ maybe it wouldn’t have turned out the way it did,” Ginsberg said.

“We’ve tracked [institution’s responses] and about three-quarters are very angry and have launched a very vocal campaign to try to discredit our findings,” Walsh said. “I have no doubt as we’ve seen with some other efforts to rate institutions that over time they begin to accept this as a reality and that we’re not going to go away.”