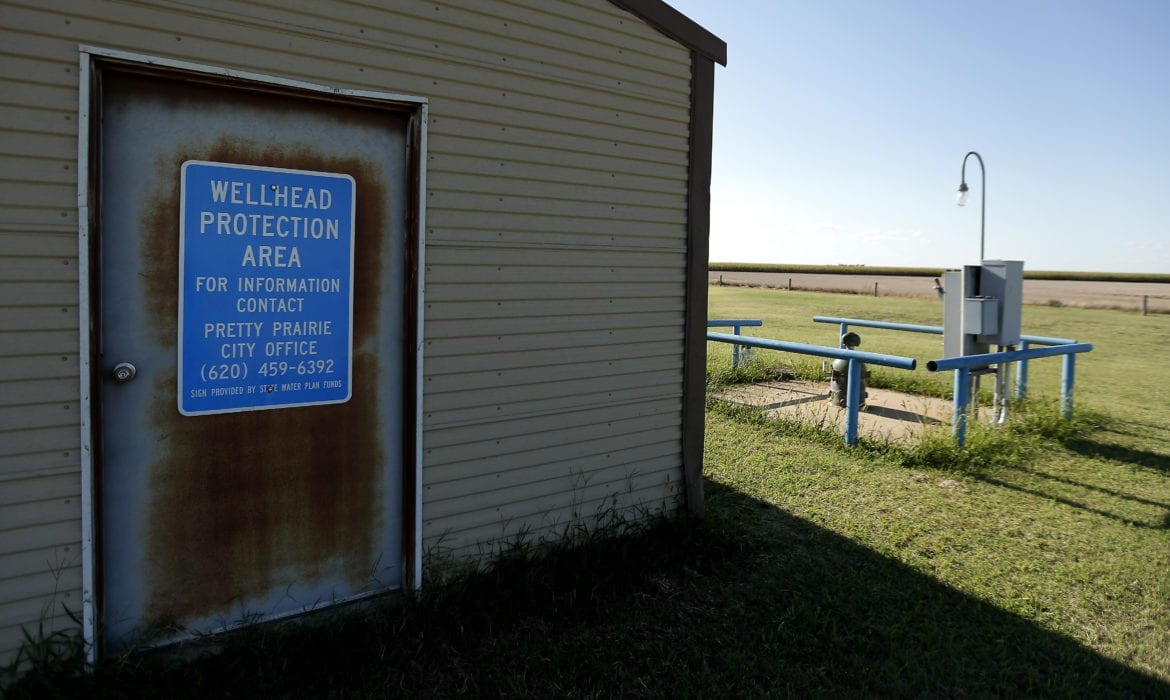 In this Aug. 19, 2015 photo, the city water well pumps on the outskirts of Pretty Prairie, Kan. The tiny farming community is facing replacing the water tower and cast iron pipes along with building a treatment facility to reduce nitrates from the city's water supply. (Charlie Riedel | AP)
Share this story

Pretty Prairie, Kansas, population 680, had a moment in the spotlight during the confirmation hearings for new Environmental Protection Agency head Scott Pruitt.

Kansas Sen. Jerry Moran mentioned Pretty Prairie as an example of a community that’s struggling because of EPA regulations that Pruitt could ease.

But residents of the tiny south central Kansas town are also concerned about how federal budget cuts might affect their ability to pay for a new water treatment system. 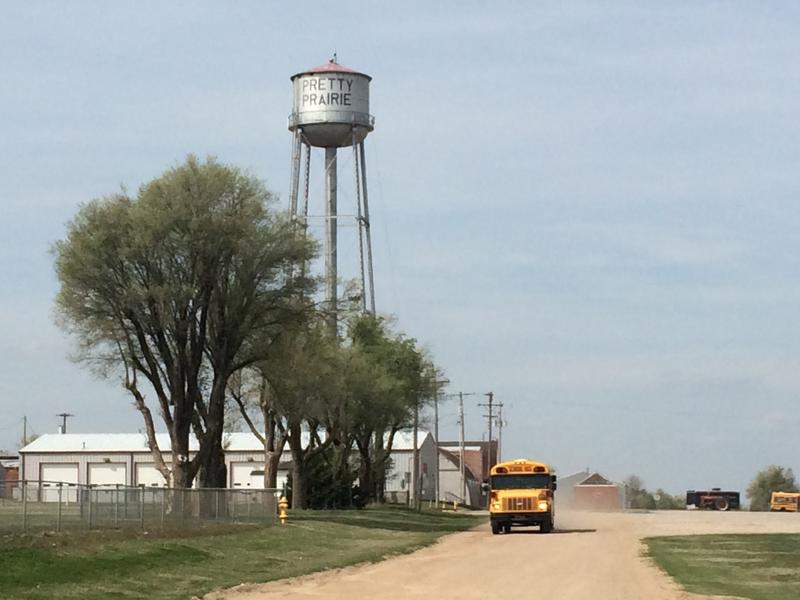 Along the two-block stretch that makes up Main Street Pretty Prairie, one storefront contains the city office and the public library. Amy Tiemeyer comes by every week – often with kids in tow – to pick up her free bottled water. She says the trip is no big deal.

“We come here a lot anyway, ‘cause the library’s connected, so we can rent movies, get books, and we kinda do it all at the same time,” Tiemeyer says.

Since the mid-1990s, the tap water in Pretty Prairie has exceeded the EPA’s safe level for nitrates, probably from the fertilizer used in the surrounding farms.

For infants, ingesting high levels of nitrates can interfere with oxygen delivery in the blood and lead to a potentially fatal cardiovascular condition called “blue baby syndrome.”

The town has managed a tentative truce with the EPA by offering free bottled water to parents who have young children or are expecting.

Tiemeyer says that, thanks to that program, she doesn’t worry about nitrates.

“Anytime I give them water, (the bottled water is) what I use,” Tiemeyer says.

City leaders say there have been no health problems related to the water, but nitrate levels are still rising, reaching over twice the federal limit in recent years.

Last fall, the EPA put its foot down, saying the town had to build a new water treatment system. It seemed Pretty Prairie would be stuck with a project that would cost $2.5 million that many residents didn’t think they even needed.

That was, until Donald Trump became president.

Across the street at the Lil’ Rascals Lounge (named in honor of Pretty Prairie’s most famous former resident Carl “Alfalfa” Switzer), city councilman Darrin Unruh kicks back with his neighbors at the end of a work day.

After decades of dealing with the issues, they chat and joke over beers about the nuances of nitrate science and environmental policy as naturally as they would about the weather.

Unruh has talked with Moran about Pretty Prairie’s situation and was thrilled to hear it mentioned during the EPA secretary’s confirmation hearing.

“I was doing a happy dance!” Unruh says. 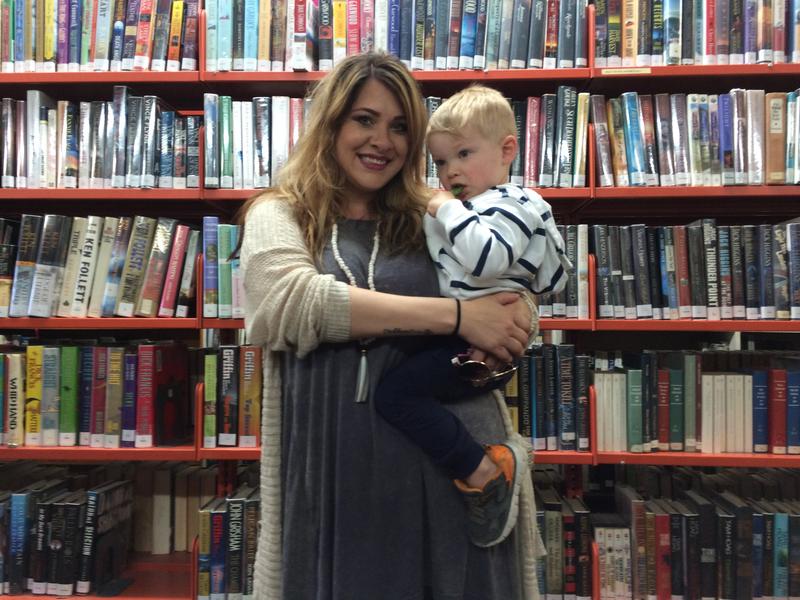 Unruh is skeptical about the danger of nitrates, and he says the town should be allowed to continue with its bottled water solution. He says residents who are more concerned can get in-home filtration systems.

Pretty Prairie is not unique in resisting water regulations. A 2016 EPA report showed Kansas is second only to Texas among states for the number of towns with high level water violations.

But even if the water situation doesn’t bother most Pretty Prairie residents, that doesn’t mean it’s not a problem for them.

Jess Stucky grew up in the area, bought a house here 12 years ago and says he’s watched it lose value ever since.

“Nobody in their right mind wants to buy a home in Pretty Prairie right now with all the issues going on!” Stucky says.

Stucky says being in violation of EPA rules has hurt Pretty Prairie’s reputation.

He explains that when a house is converted to a rental or sold at a loss, it starts a downward spiral.

“The type of people that buy it can’t afford homeowners’ insurance,” Stucky says. “Then a storm comes along, damages the home, they don’t fix it. Then somebody comes along and rents it. And then it sits there and gets worse and worse, and it looks like an eyesore.”

With nitrate levels rising and property values dropping, Councilman Unruh grudgingly admits the town will probably need – at least at some point – to build a treatment facility, and that’s where his enthusiasm about the new administration starts to fade.

President Trump’s proposed budget would reduce the Department of Housing and Urban Development’s Community Development Block Grants that the town would likely qualify for to help pay for water treatment. Pretty Prairie’s bid for a grant was denied in January on a technicality, but Unruh says the town plans to apply again.

The councilman has been reaching out to Moran and other members of Congress about preserving the grants, and he’s optimistic.

“Trump suggested it, but he suggested a lot of cuts in a lot of areas,” Unruh says.  “He doesn’t set the budget. Congress sets the budget. The buck stops with Congress. We’ve got some good representation on the Hill watching out for us.”

—Alex Smith is a health reporter for KCUR, a partner in the Kansas News Service. You can reach Alex on Twitter @AlexSmithKCUR