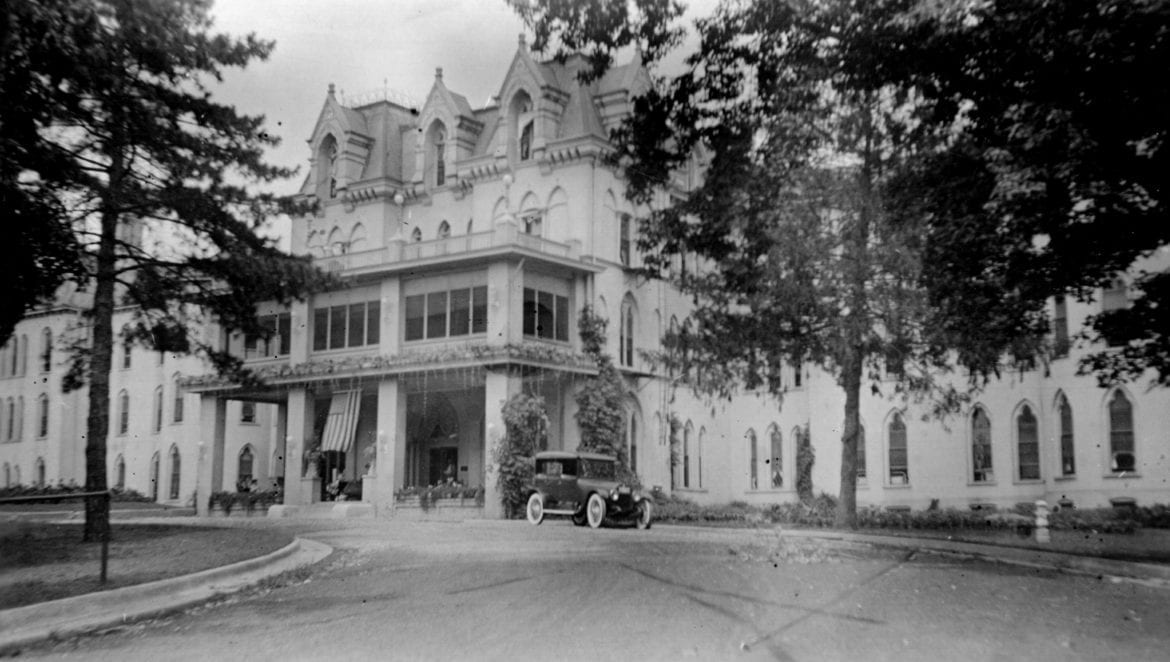 When it opened in 1874, State Lunatic Asylum No. 2 in St. Joseph, Missouri, was an example of the ornate buildings mental health reformers hoped would provide a therapeutic setting best suited to helping patients. Reformers of today hope that the new Kansas City Assessment and Triage Center can solve problems created by the downsizing of these types of facilities. (Photo: Courtesy of the Glore Psychiatric Museum)
Share this story

When Missouri’s second mental hospital opened in the late 19th century, State Lunatic Asylum No. 2 in St. Joseph was designed to provide lots of natural light and fresh air.

Yet as war and economic calamity frayed the nation’s psyche, over-crowding swamped the hospital’s lofty goals. The census of the St. Joseph facility peaked at around 3,000 patients in the 1950s — more than ten times its intended capacity.

The overcrowding wasn’t limited to Missouri. By 1963, President John F. Kennedy signed the Community Mental Health Act. The aim was to replace a system that oftentimes warehoused patients in undesirable conditions with a network of outpatient counseling and housing options.

Many mental health advocates argue that today’s reality does not match those noble intentions. They contend an underfunded community system has taken us back to the days of old, with untreated mental illness landing many sick people in nursing homes and prisons.

For many critics, Kansas’ Osawatomie State Hospital is Exhibit A for the failure of the current system, as chronicled in a recent series by the Kansas Health Institute News Service, a partner in the Heartland Health Monitor, along with KCPT and KCUR. The hospital is located about 50 miles southwest of Kansas City.

As part of this series, Flatland uses St. Joseph as a barometer to examine the state of the community mental health system in Missouri. The state converted the old St. Joseph state hospital into a prison in 1999, and the hospital’s replacement sits right across the street — with 108 beds designed to serve the western part of the state.

Though Missouri has avoided any high-profile, Osawatomie-type breakdowns, observers agreed that the community-based system in the Show-Me State is also underfunded.

A wide range of officials hope a new facility in Kansas City will prove to be a cost-effective model for providing emergency services to the mentally ill throughout the state. The Kansas City Assessment and Triage Center is scheduled to open on Oct. 31.

The video above discusses the crisis center’s place in the history of deinstitutionalization.

Mark Stringer, director of the Missouri Department of Mental Health, said that Missouri has about 3,300 inpatient mental health beds, taking into account both the private and public sectors. He said that number seemed to be adequate based upon the state’s population, but acknowledged that the department has ceded emergency inpatient services to the private sector because of budget constraints.

Garry Hammond, the CEO of Family Guidance Center, a St. Joseph-based behavioral health provider serving nine counties in the northwest part of the state, agreed with Stringer’s assessment. Hammond also agreed that the state’s relatively low reimbursement rates hamper its ability to compete with other providers for qualified staff.

Nevertheless, Stringer said, both the General Assembly and Gov. Jay Nixon have been very generous of late in their mental health budgets, including authorizing the $211 million project to rebuild Fulton State Hospital, the state’s only maximum security psychiatric facility. The project is scheduled to be completed in 2018.

Like others, Stringer applauded the move away from warehousing patients in overcrowded state hospitals.

“Missouri, like other states, did the right thing by downsizing those institutions,” he said. “But we did not create adequate community resources, and so we have been playing catch-up over the last six decades. And we are closer now to where we need to be than we ever have been before, but we still have a way to go.”