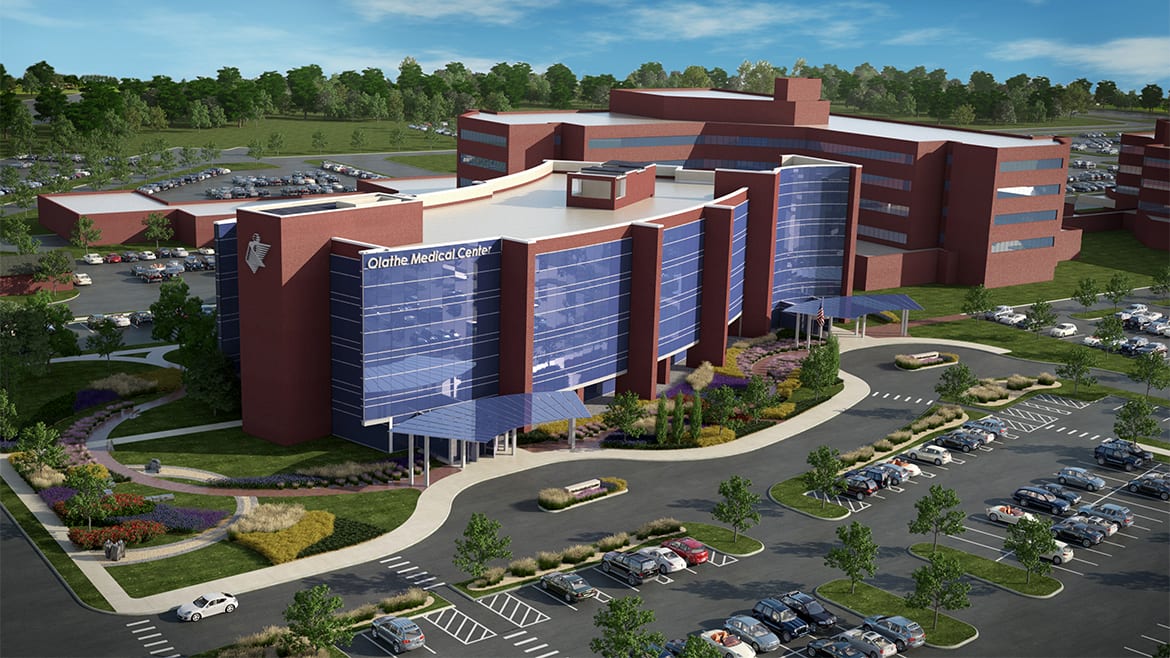 A four-story obstetrics and neonatal intensive care unit is one of several components of an expansion announced Friday by Olathe Medical Center. (Rendering by HMN Architects and Pixel Foundry)
Share this story

Olathe Medical Center on Friday announced the largest expansion in the hospital’s six-decade history, a cradle-to-grave project that calls for new buildings for obstetrics and for patients with dementia.

With an estimated price tag of more than $100 million, including buildings and equipment, the project also calls for construction of a new cancer center and expansion of the hospital’s cardiovascular center.

The total expansion – encompassing more than 200,000 square feet of space – will increase by about 20 percent the footprint on the campus, which is located at Interstate 35 and 151st Street in Olathe.

Officials said the expansion would create 200 new jobs on the campus.

“Olathe Health System really is poised to make history,” vice president Mike Jensen said in announcing the expansion before more than 500 attendees at the annual meeting of the Olathe Chamber of Commerce.

He said the four-story obstetrics building, which will include a neonatal intensive care unit, would “create an entirely new look and visibility” for the hospital from the interstate.

The hospital has already begun work on the expansion of the memory care unit, and the other projects will start by July. Completion dates range from this November to early 2017.

Established in 1953 as a 30-bed facility, Olathe Medical Center is an independent, nonprofit hospital.

Other details of the four projects include:

According to its latest federal tax filing, which the hospital submitted a just over a year ago, the hospital had annual revenues of approximately $217.1 million. It reported reserves of $364.3 million.

An overview of the Olathe Medical Center campus with proposed new projects highlighted.

Including its primary and secondary service areas, the hospital serves Johnson, Miami, Franklin and Linn counties.

Projections from the Center for Economic Development and Business Research at Wichita State University estimate the counties will have a combined population of nearly 930,000 people within 25 years.

As has been the case historically, demographers expect Miami and Johnson counties to drive future population growth.

But the movement of people into its home community is one of the biggest drivers of the expansion, said CEO Frank Devocelle.

“We are keeping up with Olathe’s growth,” he said.

Olathe Mayor Michael Copeland said high-quality health care is a key selling point for people and businesses looking to relocate to the community.

Olathe Medical Center’s announcement comes amid a number of health care projects and developments in and around Johnson County, including the recent enlargement of Overland Park Regional Medical Center at Interstate 435 and Quivira Road.

The Olathe cancer center has plenty of competition nearby. Just north of Olathe along I-35 are cancer centers at Shawnee Mission Medical Center and the University of Kansas Medical Center. The KU Cancer Center has earned federal recognition as a designated center through the National Cancer Institute.

Devocelle said Olathe Medical Center officials are concerned with  serving the needs of its service area stretching south and west.

“I don’t know why they would have to go any further than Olathe,” Devocelle said, referring to cancer patients in the community.

Devocelle said the expansion plans accord with the precepts of health care reform in that the new construction mainly serves outpatient needs as opposed to more costly hospital stays.

Friday’s announcement came only months after the medical center opened a new hospice house on the hospital campus. That facility has served more than 60 families, according to hospital officials.

Devocelle said that, even with the new construction, about half the medical center’s 250-acre site remains available for development. Future plans, he said, include more facilities in Cedar Lake Village.

He said the hospital board of trustees looked at some 60 hospitals from around the world to gather design concepts. The final plan, he said, drew on ideas from a hospital in Dubai and from the MD Anderson Cancer Center in Houston, Texas.