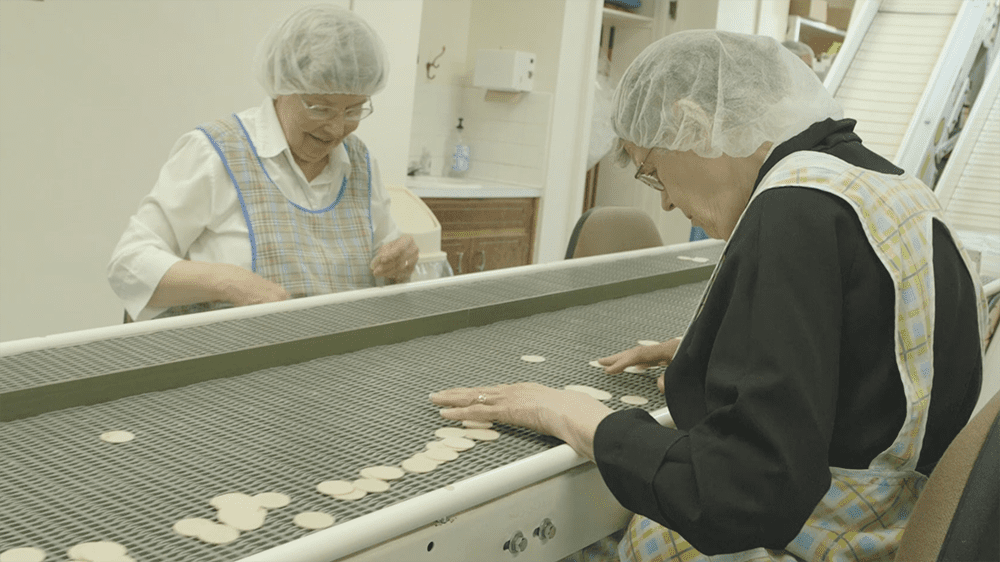 Sisters Joy Ann Wege (left) and Laurentia Doyle perform quality control on the altar breads before they are packaged for shipping. The sisters look for breads that are overly browned or cracked. (Mason Kilpatrick | Flatland)
Share this story

With more and more gluten-free options for breads available in grocery stores, last month, the Vatican reminded Catholics to be wary of the alternatives for altar bread. At Pope Francis’ request, the July letter reminded Catholics around the world that the bread they use for mass should contain wheat and water only, and to be careful about low-gluten alternatives.

This letter wasn’t news to the sisters in Clyde, Missouri, at the Benedictine Sisters of Perpetual Adoration. The monastery, about an hour and a half north of Kansas City, has been producing Vatican-approved low-gluten altar bread since 2004 — the first to do so in the world.

Today, the sisters make 1.5 million low-gluten altar breads a month, in addition to the 9 million regular wheat and white altar breads they’ve been making since 1910. Dawn Mills, the prioress general of the Benedictine Sisters of Perpetual Adoration said the recent Vatican letter has already produced more phone calls and orders.

In the 1990s, the sisters saw a need to produce an altar bread that those with a gluten intolerance could handle.

“We had sisters who had great curiosity and some scientific background, and they started researching some options,” Mills said.

It took 10 years to perfect a recipe that uses a wheat starch with most of the gluten removed from it. In a recipe, the sisters were looking for a bread that was easy to make, easy to cook, that could pack well and have shelf life.

In 2003, the low-gluten bread was approved by the Vatican, the same year Cardinal Joseph Ratzinger wrote a letter clarifying the rules for valid communion. In that letter, altar bread must contain enough wheat to obtain confection, or to hold together.

The Catholic Church is dedicated to wheat for its holy hosts because Jesus ate bread and wine during the Last Supper, said Paul Turner, pastor at the Cathedral of the Immaculate Conception in Kansas City and director of divine worship for the Kansas City-St. Joseph Catholic Diocese.  The Church wants to stick as close to tradition as it can get, and traditionally the bread Jesus ate would have been only made of wheat and water. Catholics believe that during Mass, Christ becomes truly present in the Eucharist.

At the Benedictine Sisters of Perpetual Adoration, the sisters’ religious mission is dedicated to Christ as he is present in the Eucharist. Mills said this makes their altar bread operation a perfect compliment to their prayer life. 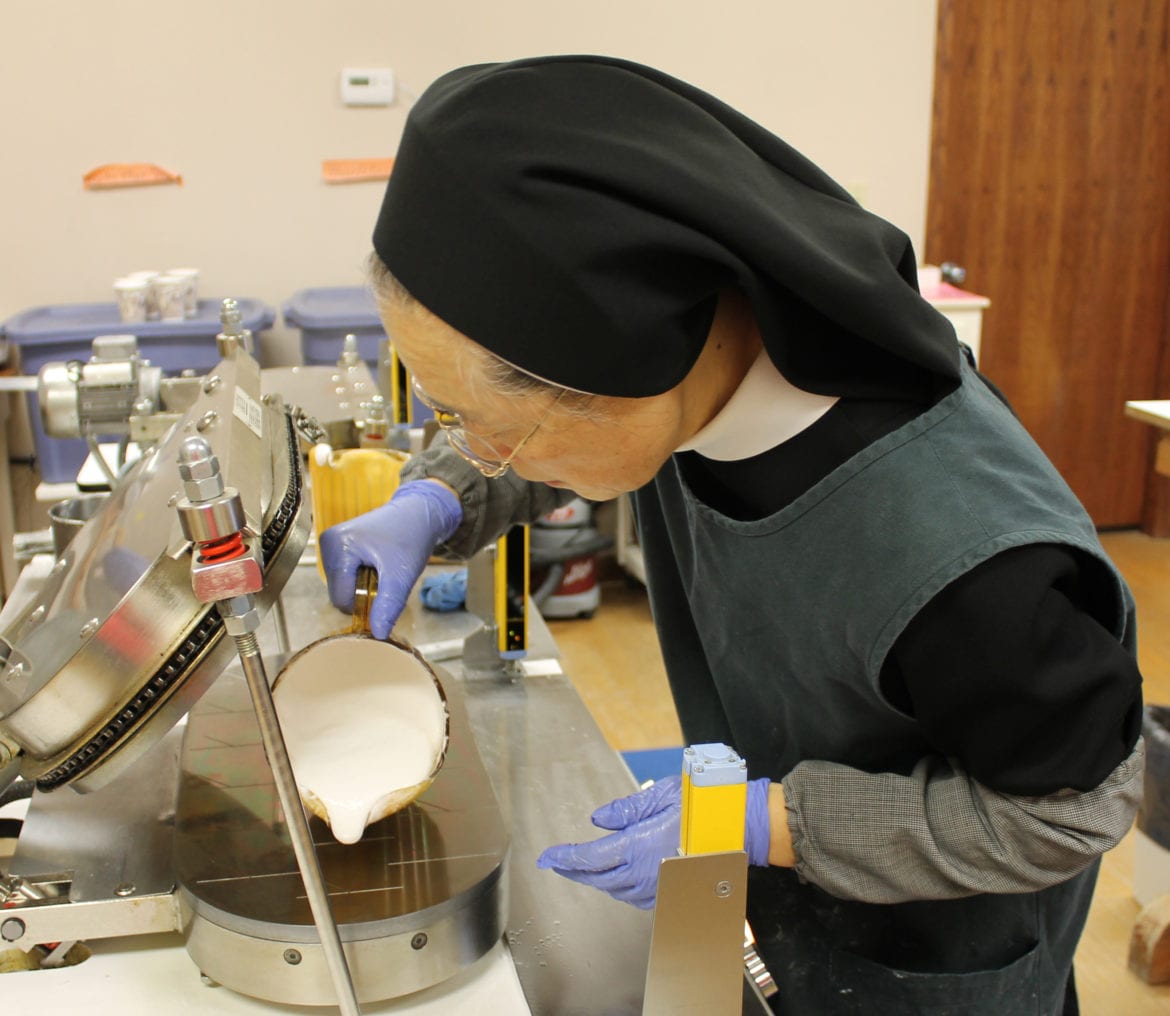 The sisters started selling their low-gluten altar bread to the public in 2004. The United States Conference of Catholic Bishops lists the monastery as a seller of low-gluten hosts, and the Center for Celiac Research and Treatment at the University of Maryland has also approved the hosts. A person with a gluten intolerance would have to eat about 270 pieces of altar bread to get sick, according to a statement on the Benedictine Sisters of Perpetual Adoration website.

The sisters ship their bread throughout the U.S., Canada and to Europe. They’ve also shipped low-gluten bread to Australia, Mexico and have provided to military chaplains who are stationed all over the world.

Mills said the biggest buyers of the low-gluten altar bread are individuals, who buy it on their own and bring to their priest, who will bless it during services. Most of the time, it is kept separate to avoid contamination from gluten hosts.

The trend is growing among parishes, too.

“More and more parishes are buying directly with their regular altar bread order, they’ll place a low-gluten order, because they have several parishioners who need the low-gluten bread,” Mills said.

Turner said his parish buys the low-gluten altar bread from the sisters, and then gives it to the parishioners that need it for Mass, who will bring it with them when they come to mass.

The sisters also sell their bread to non-Catholic churches and people.

“We are not the largest producer of altar bread in the country, but we are largest group of nuns doing altar bread work,” Mills said.

There are 50 sisters living at the monastery in Clyde, and the order has 66 members total, Kelley Baldwin, director of communications for the sisters said. However, their altar bread operation has gotten so big, the monastery began hiring people in the community to help in production.

“Working with people near us keeps us more in touch with real life, and real life informs our prayer,” Mills said.

— Catherine Wheeler is a multimedia intern for Flatland. She is a graduate student studying journalism at the University of Missouri, Columbia. Catherine has a bachelor’s degree in English-Writing from Fort Lewis College in Durango, Colorado. She currently lives in Kansas City. You can reach her at cwheeler@kcpt.org