Above image credit: Bert Wire's farm sits behind the "Farms Not Factories" sign near Chillicothe, Missouri, on March 19. 2021. Wire's property is just down the street from the CAFO site. (Danielle Pycior | for the Midwest Center for Investigative Reporting)
Sponsor Message Become a Flatland sponsor

Missouri regulators on Tuesday eased the rules governing design of massive industrial hog facilities in a move critics claim was meant to help one controversial facility.

The change was decried by environmentalists and small farmers who attended the meeting, who said the commission was looking out for corporate agricultural interests while putting the safety of the state’s groundwater at risk.

“It is not your job to remove red tape for a CAFO,” said Mary Bolling, a farmer in Franklin County. “It is your job to protect the water for the citizens of the state of Missouri.”

The Department of Natural Resources filed a proposed amendment that would exclude perched water from that definition last year and planned to adopt it on an expedited timeline, as first reported by the Kansas City Star. The department has argued it made an error when previously amending regulations and needed to provide clarity for CAFO operators.

But residents of Livingston County, who have fought back efforts to build a CAFO there, and environmentalists argue the move seemed designed to benefit the owner of the previously-proposed Livingston County CAFO. Applicants withdrew the proposal earlier this year.

The CAFO would have been owned by United Hog Systems, LLC. The company’s owner, Robert Zeysing, did not immediately return a phone call and email seeking comment. An employee reached by phone said the company didn’t offer statements.

Robert Brundage, an attorney representing the Missouri Pork Association, said in a statement his clients were pleased with the reinstatement of the rule.

“These definitions will again provide clarity and direction to CAFO design engineers. Contrary to assertions made by the rules’ opponents, these definitions do not weaken pollution standards or enable a CAFO to discharge manure to the state’s waters.”

The Livingston County CAFO was first proposed near Chillicothe more than a year ago. An engineer working on the project filed a revised application in September for nearly 10,500 hogs across three barns at the site, which was to be known as the Z-8 Sow Farm. The facility, which could produce more than 8.2 million gallons of manure and wastewater per year, would be owned by United Hog Systems, LLC.

CAFOs are often opposed by nearby residents concerned about the smell and potential for air and water pollution. In Livingston County, neighbors have organized a Facebook group to keep up with environmental legislation under consideration by the Missouri General Assembly and DNR’s regulatory changes.

Susan Fair, a member of the group who lives outside Chillicothe, said the CAFO had the potential to ruin the quality of life for neighbors. And she noted the owner wasn’t local, the hogs wouldn’t be purchased from local producers and said the construction materials wouldn’t come from the area.

“I have yet to hear one advantage for my community,” she said.

According to the suit, neighbors found perched groundwater two to three feet below the surface on the site in March of 2020. Later in the year, DNR initiated an emergency rulemaking effort to remove perched water from the definition of groundwater for consideration of CAFO application, sparking the suit.

“The only pending CAFO permit application that would be affected by and benefitted by an emergency rule that excludes ‘perched water table’ from the definition of ‘groundwater table’ is the current application submitted by United Hog Systems for the Z-8 Sow Farm,” the lawsuit, filed Dec. 15, says.

A Cole County Circuit judge ordered DNR last year not to go forward with the change on an expedited schedule.

The lawsuit’s plaintiffs filed an amended complaint Tuesday following the vote, saying the change was unlawful.

“During the comment period…expert scientific hydrogeological evidence was submitted to the (Clean Water Commission), which showed there is no reasonable basis to exclude ‘perched groundwater’ at a concentrated animal feeding operation site from the scope of regulation,” the complaint says, adding that other facilities, including wastewater treatment plants, are subject to perched groundwater regulations.

DNR received a myriad of comments against the proposal from environmental groups, neighbors, rural advocates and scientists in March, urging the agency not to move forward with the change.

“The Missouri Department of Natural Resources is responsible for protecting groundwater, not for prioritizing corporate profits,” said Marisa Frazier of the Missouri chapter of the Sierra Club. “Changing the groundwater definition to exclude perched water for only CAFOs shows a strong and scientifically unfound bias on behalf of these factory farms.”

The local chapter of the American Institute of Professional Geologists urged DNR officials to create a working group to come up with a “reasonable and effective rule based on scientific and engineering principles” already in place to regulate solid waste facilities.

“Given the extraordinary complexities of groundwater occurrences in Missouri, a proposed rule of this nature could impact generations of Missourians,” the group wrote.

Brundage spoke in favor of the change in March, saying CAFO builders need clarity surrounding the rules. He noted the rules only cover the design of the facility, not efforts CAFO owners have to undertake to protect groundwater.

“I also want to point out that, you know, we’ve heard some testimony today that people are worried about CAFOs polluting the groundwater,” Brundage said in March. “You know, to my knowledge, there has been no instance where a CAFO has been — polluted the groundwater.”

In his statement Tuesday, he added: “Clearly, the CAFO rules have served the state well and will continue to do so with the reinstatement of these definitions.”

Brain Smith, a rural organizer with the Missouri Rural Crisis Center, said he was disappointed but not surprised by the decision. He noted the myriad comments DNR received opposing the change.

“And yet they still approved it on the basis of corporate agriculture — at their behest and for their benefit at the expense of the rest of us,” he said.

Commissioners had little discussion over the issue aside from the comments from Commissioner John Reece, who said the regulations didn’t go far enough in holding CAFO operators accountable.

Reece, a retired executive director of the Little Blue Valley Sewer District, was the lone vote against the change.

He suggested the commission do a more thorough review of its CAFO regulations governing both design and operations.

“Doggone it, these CAFO owners, they’re in it for a profit, to make money, and I really feel like they need to be held accountable,” Reece said.

Allison Kite is a data reporter with a focus on the environment and agriculture. This story first appeared on the Missouri Independent, a nonprofit news operations covering Missouri state government and politics as part of States Newsroom. 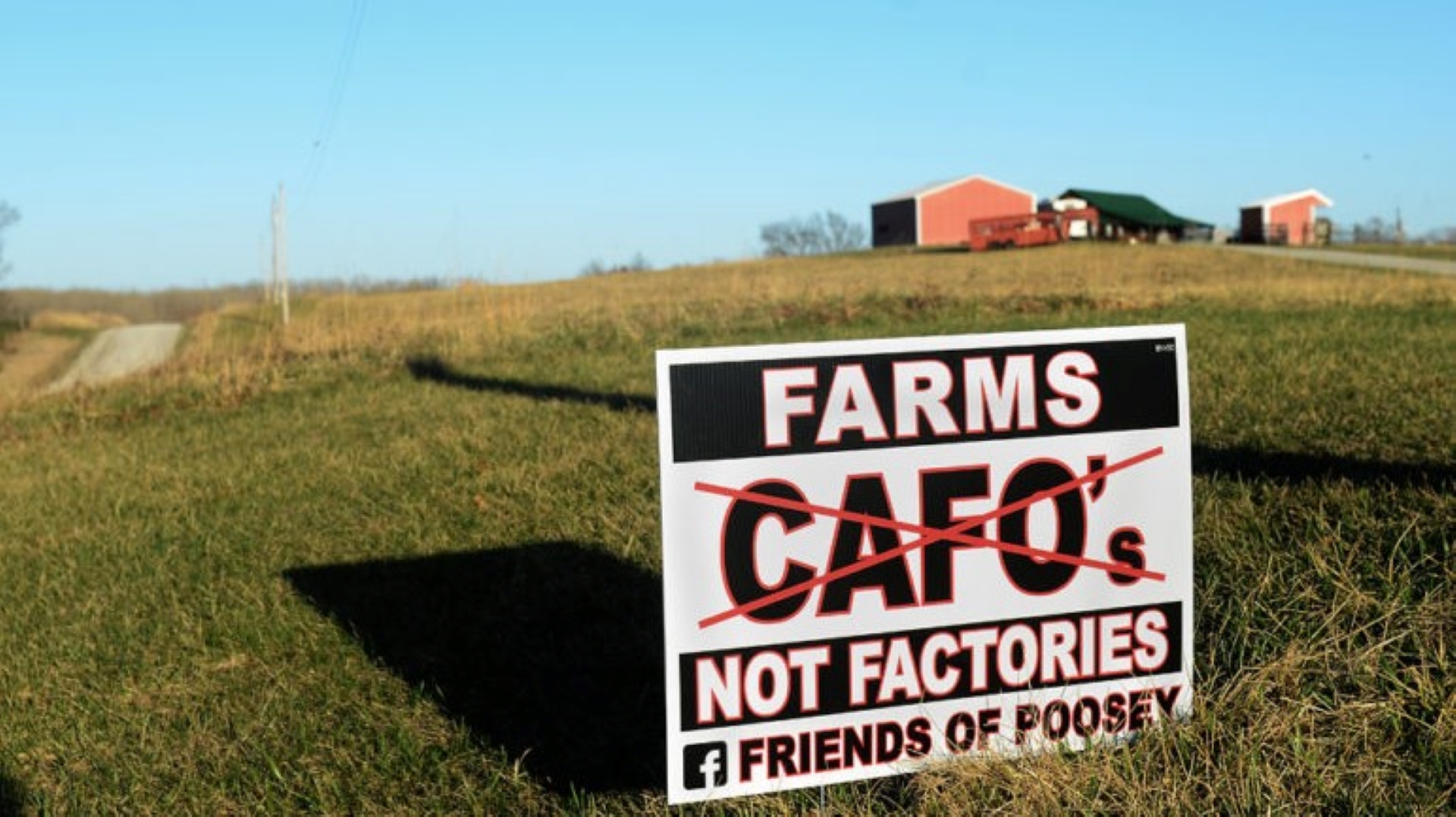 As Regulations Vanish, One Missouri County is Ground Zero for Factory Farming Debate The state eliminated local control over large animal feeding operations. Some rural residents want that power back.