In the Margins: A KC place for putting lives back together 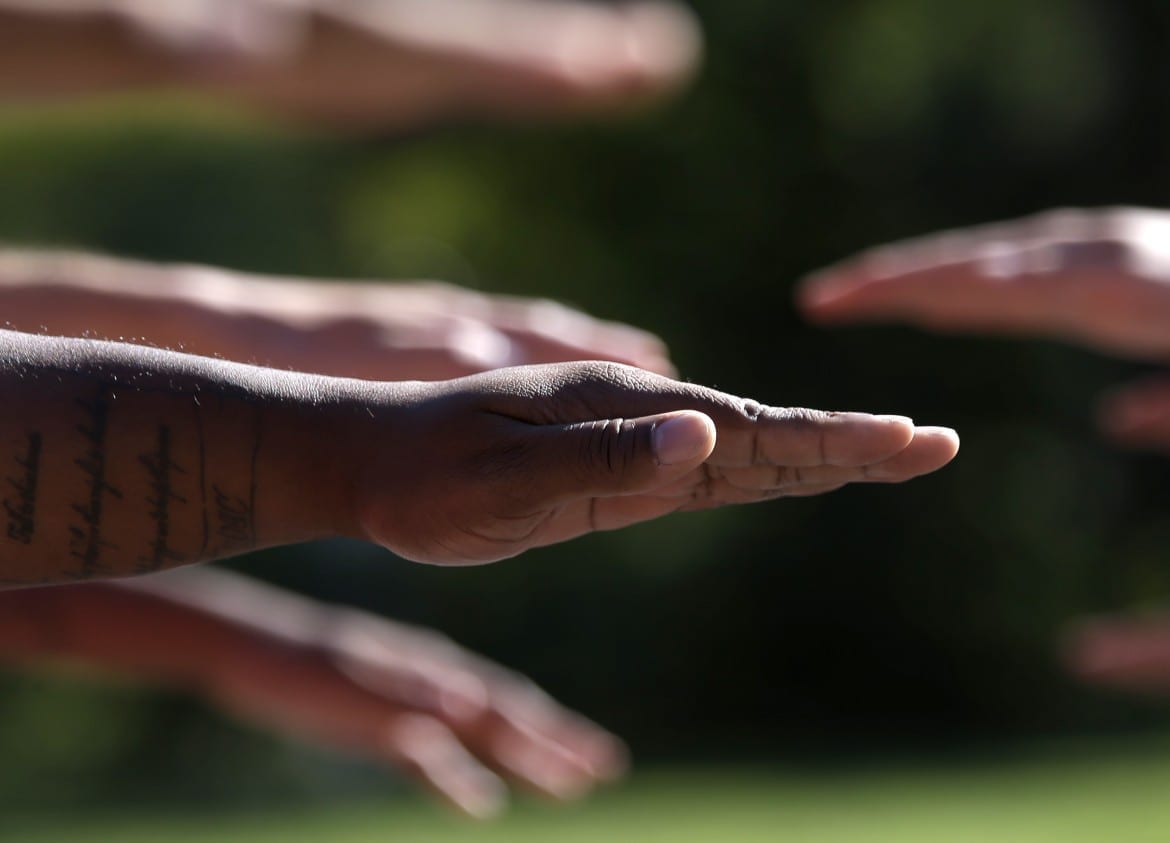 In this photo from AP Images, inmates stretch their arms to ensure proper spacing while standing in formation at the Moriah Shock Incarceration Correctional Facility Wednesday, Aug. 22, 2012, in Mineville, N.Y. The program is designed partly to address recidivism rates and prepare inmates for life outside prison. (AP Photo: Mike Groll)
Share this story

The mistake that sent Rodney Hensley to prison was not paying child support.

He spent seven months in prison for his offense. After being released from the Fulton Reception and Diagnostic Center in Fulton, Missouri, he arrived at the door of Joshua’s Safe Haven.  It’s a transitional housing at 6th Street and Benton Blvd. in Kansas City, Missouri. Hensley had nothing but his clothes.

“I got to a place in my life that I never thought I would be,” Hensley said.

Like Hensley, most felons after being released from prison are jobless, homeless and have no form of transportation. Many, according to a 2008 study from the Urban Institute, are saddled with drug or alcohol addiction.

And at a time when basic stability is most important, many felons have a difficult time finding necessities like work, health care and housing: People are notoriously reluctant to offer a job or rent an apartment to a former felon. Because of this, research shows that offenders without support systems can end up relying on a patchwork group of underfunded services including public mental health or rehab facilities, transitional housing and vocational assistance.

According to the Urban Institute report, having reliable employment may be directly related to recidivism rates. The study authors looked at former felons in three states and estimated that the likelihood of returning to prison was 8 percent for people earning more than $10 an hour and 23 percent for people unemployed two months post-release.

Hensley didn’t get where he was because he was a stranger to work. His family operated a dairy farm for 30 years. He worked right up until he went to prison.

And after serving his time, he says he was ready to turn his life around. He is now close to both of his sons – one of whom lives in China and another in Colorado.

But he needed help to get back on his feet. One of the first things he found out was that businesses are reluctant to hire a former felon. It is illegal for employers to discriminate against people on the basis of their race, religion, sex or disability, but former felons aren’t protected under equal employment laws. Most applications have a question asking about previous felonies. Even if the question isn’t included initially, a background check can be used to reveal that information.

The Urban Institute report, which studied 740 former male prisoners in Illinois, Ohio and Texas, found that less than one-third of prisoners surveyed were employed and received a median wage of $8 an hour two months after release. After eight months, closer to half were employed.

Hensley found Joshua’s Safe Haven just a few months after his release in 2013. After working some odd jobs, he was hired at Spears Transportation, Inc., a local transportation company Hensley credits with helping him turn his life around. 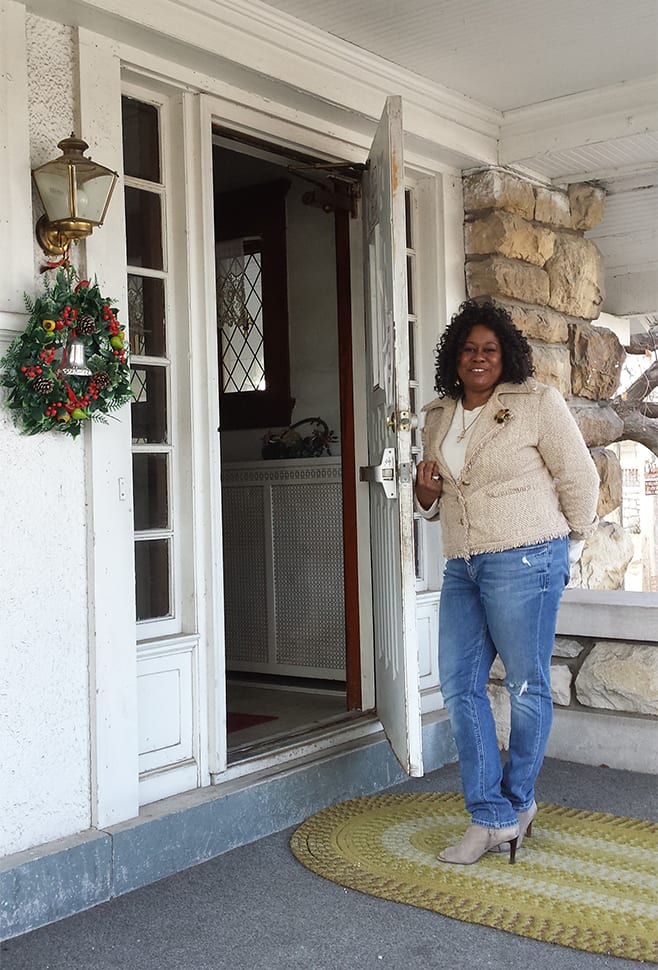 One thing is glaringly apparent about Sarita Graham – she is no-nonsense. As she gives me a tour of Joshua’s Safe Haven, a man walks up and hands her an application for the program. He lingers, attesting to his employment history and asking when he will be notified of acceptance. Without even glancing in his direction, she tells him, “Don’t you worry about it,” and continues our tour.

But if Graham sometimes seems blunt, just as prominent is her capacity to help others. As executive director of Sarita’Lynne Ministries, Graham is a pastoral and substance abuse counselor and owner of Joshua’s, Isaiah’s Place and Princess House for Women.

Graham grew up around transitional housing. Her mother ran a home when she was a child. Graham, however, saw how tough this could be and moved in another direction. As a young woman in the early 1980s, she was a Detroit Pistons cheerleader and a Super Bowl Grand Marshall.

But it was underlying problems and eventually a tragedy that brought Graham back to the business of helping others. She says she suffered verbal abuse in her first marriage and had a family history of addiction. After having one child, she left her first husband and married her current spouse in 1985. She worked various jobs throughout the years, had two more children and volunteered with programs helping men who were incarcerated or dealt with substance abuse.

It was the challenges experienced by Graham’s daughter, nicknamed Princess, who brought her back to the mission of transitional housing. While going to college in Oklahoma, Princess got involved with drugs and an abusive relationship. She was planning to return to Kansas City and open up a home with Graham in 2005. But Graham received a call in September of that year that her daughter had been found dead in her apartment. The cause of death was never determined.

Graham used the insurance money she received to purchase her first transitional home – Princess House – in late 2005. She now serves about 75 individuals at any one time between the three homes. 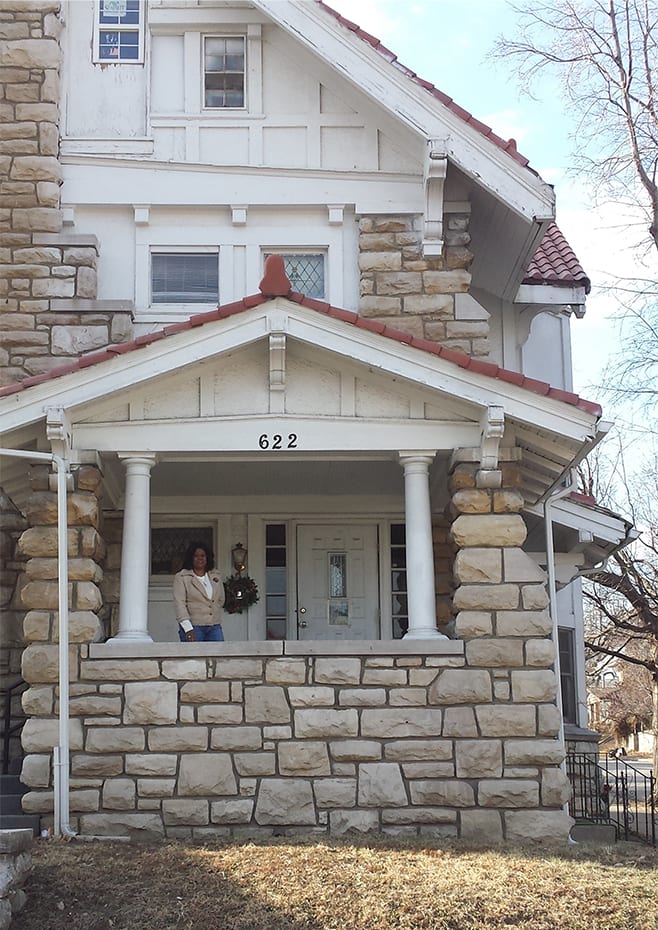 Most residents are guided to the programs so they can have safe, reliable housing during parole or rehabilitation. The initial stay is 90 days and is typically paid for through Access to Recovery grants from the state of Missouri. People who stay longer remain on as self-pay residents.

The ATR grants are one of the main sources of funding for Graham. This money is offered to organizations that provide clinical, housing support and transportation services to people with substance use disorders, veterans and formerly incarcerated individuals trying to reintegrate into the community.

But this year Missouri didn’t receive the funding, which is awarded by the U.S. Department of Health and Human Services and is only given to a handful of states. Losing the grants means a $9 million loss to Missouri organizations over the next three years.

This money helps Graham pay for things like $4,000 gas bills and $2,000 electric bills in just one of her aging, drafty buildings. She says currently her expenses exceed the revenue, so she is constantly searching for alternative funding avenues.

“I’m operating on faith and the few self-pays that are out there,” Graham said. “Grants are seasonal, so it is a challenge. State and federal funding isn’t always guaranteed.”

Along with a safe room to live in, Graham provides dinner to the residents on Sundays and stocks food for those who need it the rest of the week. Residents attend three meetings a week, Bible study and life skills classes.

She has an open-door policy and is on hand to coach and support the residents. The Princess House has occasional pajama parties where she stays overnight to spend time with the women. If men or women have visitation rights, their children are welcome to spend time with their parents on evenings and weekends. At Christmas, she held a big party with gifts for everyone.

What Graham offers is a second chance for people who want to work for it. They are given a sense of security and a warm bed surrounded by people who have experienced similar challenges. Graham teaches them how to make the choices that will help them avoid returning to prison or substance abuse.

Most importantly, she accepts them and offers to love them, as she says, “right where they are at.”

“There is a stigma and people don’t want to help them,” Graham said. “They look at them as continual failures … and they are left behind.”

Hensley has been living at Joshua’s for more than a year and has been saving money. His goal is to move to his own apartment this spring. Paying rent steadily has provided him with a good track record and Graham as a personal reference. He has been guided back toward self-sufficiency.

“Sarita has everyone’s interests at heart,” Hensley said. “Especially for people that really want to put their lives back together and are truly ready to get on the straight and narrow.”

In the Margins is a new series of articles from KC writer Tammy Worth, exploring the people and places that make up KC’s under-served communities.