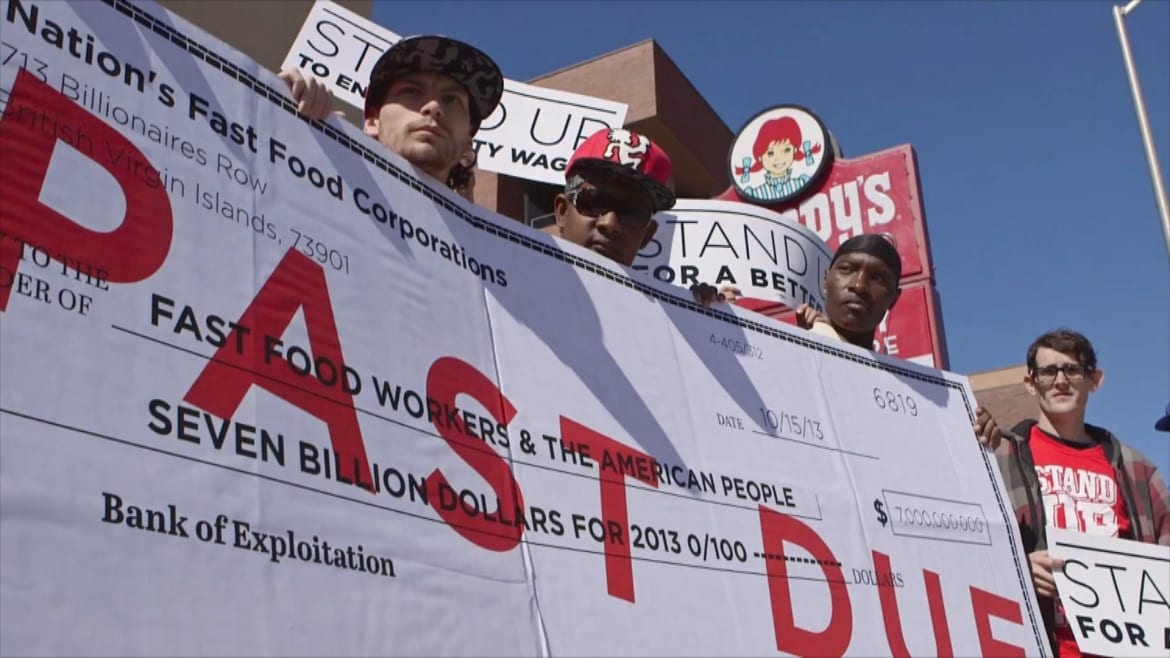 Fast food workers in the Kansas City, Mo., area took to the street to demand a better wage on July 29, 2013.

Armed with megaphones and signs, they stood outside a Burger King restaurant at the corner of Troost Avenue and Emanuel Cleaver II Boulevard demanding “15 and a Union,” the workers’ rally cry for an increased wage of $15 an hour and the right to unionize.

This event made Kansas City one of the first of 8 cities in the United States where fast food workers would walk out of their jobs to try and shed light on the low wages they are paid.

The workers claim their wages, which for most hover just above the minimum wage, are “poverty wages,” which make it impossible to pay bills and raise a family. Many workers said it was commonplace for workers to use welfare or other forms of the public safety net. They also made the argument that it’s hard to get up the ladder while working full-time and still not earning enough to pay bills.

In the Kansas City area, fast food workers called for three different strikes over four days in 2013. During the strikes, workers would drive around to different fast food restaurants where they would enter the establishments and make their demand for better pay. Dozens of workers flooded into the lobbies of the restaurants, waved signs and used megaphones to make their demands known to patrons and management. Many times the workers making the “demands” were employees of the fast food restaurant.

University of California, Berkeley released a study in October 2013 that shed light on the working conditions of fast food workers in the United States, echoing the concerns of the striking workers in Kansas City. The study, “Fast Food, Poverty Wages,” focused on the public costs of low-wage jobs in the fast food industry. The study reports the median wage of workers was $8.69 an hour, median hours worked was 30 per week and only 13 percent of workers receive health benefits through their employer. It highlighted that 52 percent of the families of front-line fast food workers (non-managerial workers) are enrolled in one or more public safety net program, compared to 25 percent of the U.S. workforce as a whole. The study focused on the four largest nationwide safety-net programs and found that in Missouri, 49 percent of fast food workers relied on public assistance with a cost to the U.S. taxpayer of $149 million a year.

The Berkeley study concluded that due to low wages, lack of benefits and part-time employment, families of fast food workers utilize federal public benefit programs at a cost to the U.S. taxpayer of nearly $7 billion a year.

Fast food workers cite the study as proof that they are being paid too little, while some economists and liberal pundits say the issue showcases how the U.S. taxpayer is subsidizing an industry that makes billions of dollars of profit a year. A National Employment Law Project report details both the profits of the fast-food industry and the cost of the industry to taxpayers.

The issue of low wages in the fast-food industry has begun a discussion across America about whether the current minimum wage is sufficient. President Obama spoke about the issue during the State of the Union speech in January. He urged Congress to raise the minimum wage from the current rate of $7.25 to $10.10, which would raise the wages of 17 million Americans.

In the same speech, Obama promised to raise the minimum wage for federal contractors to $10.10 by executive order. He signed this order Wednesday.

City council members in Los Angeles want to raise the city-wide minimum wage for hotel workers to $15.37, with the hopes to extend the raise to all workers across the city.

Even though there have been scattered small raises for some workers since the strikes began over six months ago in Kansas City, workers said they won’t stop seeking “15 and a Union.”  They said they will continue to demand raises and the ability to unionize. They plan to grow the ranks of fast food workers participating in the movement while also growing the numbers of community members willing to stand beside these workers.

Watch the segment on The Local Show.