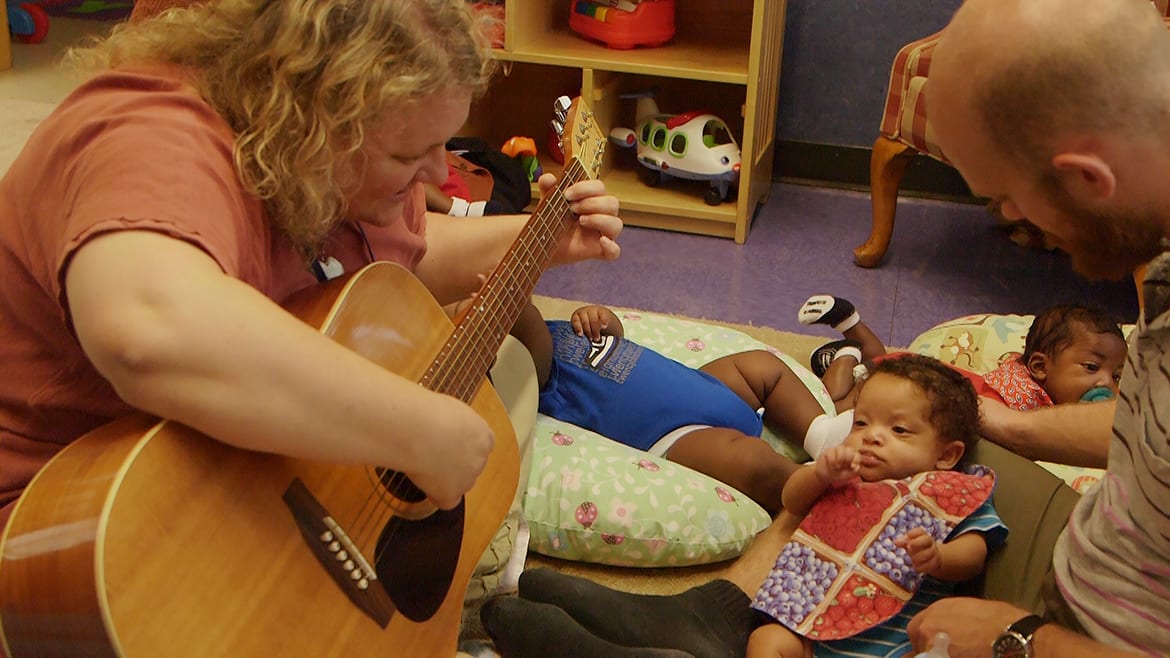 If the idea of music therapy brings to mind 1960s-era folk singers warbling to bemused patients, you haven’t seen Deanna Hanson-Abromeit at work.

At Operation Breakthrough in Kansas City, Missouri, the University of Kansas assistant professor sings a good morning song to Daren, a curious, if slightly cautious, infant.

The tune is a simple one, and the singer bubbles over with enthusiasm, but her musical interventions are more of a conversation than a performance.

But it’s also research. Hanson-Abromeit is leading an international effort to create a protocol for using music therapy to help premature infants survive and thrive.

In her session with Daren, she engages completely with his every movement, playing to her one-person audience in a way that might put Al Green to shame.

She watches his eyes and head while making constant changes to the music’s volume and tempo, trying to engage the baby’s attention.

Before the end of the second verse, Daren breaks into a big smile.

When Hanson-Abromeit first started studying music therapy in the early 1990s, she got a warning from her college adviser: have a back-up plan. At the time, music therapy was struggling for respect, and many therapists ended up working as music teachers.

But the field has changed dramatically in the past few years, and now the KU academic is considered one of the leading researchers working with premature babies.

“When we’re born a full-term infant, we can see, but our vision is protected is a way that we don’t take on too much stimuli for our systems to organize,” Hanson-Abromeit said. “And when a baby is born prematurely, those systems haven’t yet fully developed.”

She explains that premature infants are overwhelmed with information: noise, light, new people. A neonatal intensive care unit can be especially chaotic, and the babies’ brains aren’t developed enough to handle it all. The stress puts their nervous system into fight-or-flight mode, which robs them of the energy and focus their brains and nervous systems need to help them grow.

But if music has charms to soothe a savage breast, it can also soothe a newborn’s nervous system.

Pre-recorded music won’t do the trick. The educational value of Baby Einstein DVDs have largely been debunked. Helping infants’ brains develop requires something more subtle: the kind of attentive interaction practiced by therapists like Hanson-Abromeit.

“We can change those characteristics of the music to be less complex,” she said. “And then build that up gradually for more complexity as the baby’s neurological processes can handle that, or we help them start to develop those things.”

“She’s a big brain in music therapy in many areas,” Loewy said.

An article published in the journal Pediatrics last year described a study by Loewy and colleagues that was one of the field’s big breakthroughs. Involving 11 hospitals and nearly 300 premature infants, it made clear the impact musical therapy could have.

“We were able to show that we could render other heart rates, different sleep patterns, improve caloric intake and sucking behavior, and that parent-preferred lullabies could decrease stress,” Loewy said.

For her part, Hanson-Abromeit has been striving to improve scientific understanding of music therapy.

Last year, she joined with researchers in the United Kingdom and Australia to form Music and Neuro-developmentally At-Risk Infant, or MANDARI, to explore how music therapy affects the brain. The group held its first international conference this summer.

Hanson-Abromeit said the next step is to establish a formalized method for music interventions with premature infants. Through her own clinical work and other research, she’s codifying how a therapist should respond when an infant looks away, for example, or shows an increased heart rate.

Though Hanson-Abromeit’s field has made great strides with the help of neuroscience, she believes there’s still a lot to learn from the basics of music therapy: working with the newborns themselves to make a musical connection.

And as music therapy continues to gain professional respect, Hanson-Abromeit hopes her work will help take music intervention beyond the exclusive realm of the professional therapist.

“As we learn more about how and why music works with premature infants,” she said, “it’s going to be really important to help parents learn how to read those cues and adapt the music to help manage the symptoms that their babies are experiencing, whether it’s pain or agitation or discomfort, so that then they can also build really nice memories and experiences with their infant and create attachment and bonding through positive experiences.”

Alex Smith is a health reporter with Heartland Health Monitor, a reporting collaboration among KCUR Public Radio, KCPT Public Television, KHI News Service and Kansas Public Radio. He is based at KCUR. Click here for the original article.