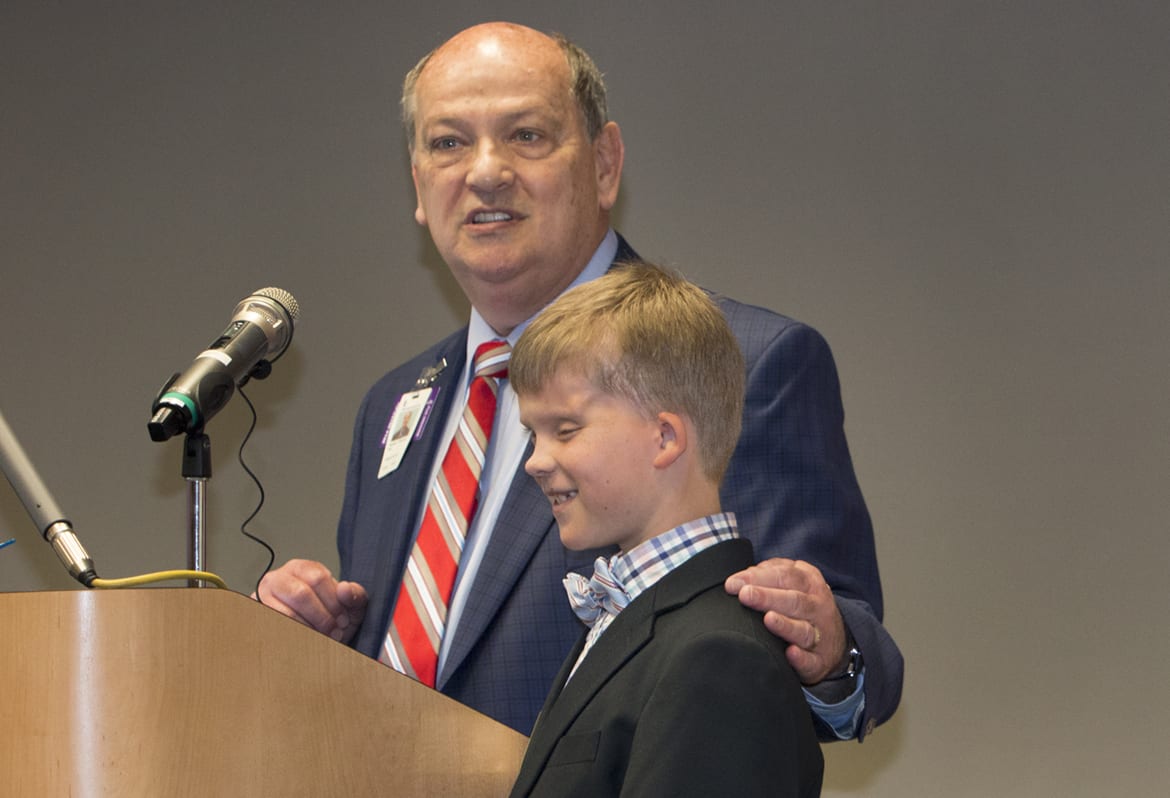 "This is why we do this," Children's Mercy CEO Randall O'Donnell said Wednesday as he put his arm around 11-year-old Charlie Walsh, a one-time cancer patient at the medical center. Charlie was on hand when Children's Mercy and the University of Kansas announced a cancer collaboration. (Photo by Mike Sherry/The Hale Center for Journalism)
Share this story

A new agreement between the University of Kansas and Children’s Mercy will strengthen research, education and clinical ties between the institutions in oncology and beyond, officials said Wednesday at a signing ceremony.

“This just makes so much sense,” said Dr. Roy Jensen, director of the University of Kansas Cancer Center (KUCC). “It also is the best thing for our kids, and that is what has to drive all of this.”

The document signed Wednesday makes Children’s Mercy part of the consortium that has earned the KU Cancer Center its status as a federally designated center through the National Cancer Institute. Children’s Mercy is a pediatric medical center whose main facility in Kansas City has 354 licensed beds.

The group also includes KU and the Stowers Institute for Medical Research in Kansas City. The partnership is preparing to submit a new application to the National Cancer Institute for its highest level of recognition – which would give  KUCC the right to call itself a “comprehensive” cancer center. There are 41 such centers around the country.

“This combines all of the basic research talents and expertise of the Stowers Institute and the education and clinical involvement of KU and Children’s Mercy alike,” said Children’s Mercy CEO Randall O’Donnell. “So it is a very, very potent consortium.”

The agreement includes financial considerations as well, but neither KU nor Children’s Mercy would disclose those details.

In addition to O’Donnell and Jensen, signatories of the agreement were KU Chancellor Bernadette Gray-Little and Dr. Doug Girod, executive vice chancellor of the University of Kansas Medical Center. About 75 people attended the signing ceremony at Children’s Mercy.

Officials said the strengths they hope will enhance their standing with the National Cancer Institute also make the new partnership between KU and Children’s Mercy beneficial to patients, particularly in the areas of genomics, personalized medicine and drug development.

At the most basic level, officials said, the agreement will encourage shared use of lab space. More broadly, they said, the partnership will increase the number of clinical trials that are now part of the consortium.

Such trials generally test experimental treatments and often represent last-ditch efforts to save patients who have not responded to conventional therapeutics. The research components of these trials are also key areas considered by the National Cancer Institute in its review.

Children’s Mercy says its Division of Hematology, Oncology and Bone Marrow Transplantation participates in nearly 100 clinical trials at any given time, including several national efforts led by the hospital’s researchers.

Children’s Mercy’s pediatric oncology program is one of the largest in the country, serving nearly 200 patients a year.

Having such close ties to a pediatric hospital sets the KU Cancer Center apart from most other NCI-designated centers around the country, Jensen said.

“Lots of times they are kind of off as a separate entity,” he said, “so I think that is a real strength for us.”

Officials from both institutions said the agreement is another step in Children’s Mercy’s and KU Med’s effort to intertwine their pediatric programs, which are now overseen by one physician administrator.

They said they are also working to enhance collaboration between their residency programs.

Girod said the organizations have already made great strides in partnering in education and research.

“Clinical services is the final straw that that we need to continue to work through,” he said. “We have a lot going on already clinically. We just have to figure out how to do that more efficiently.”