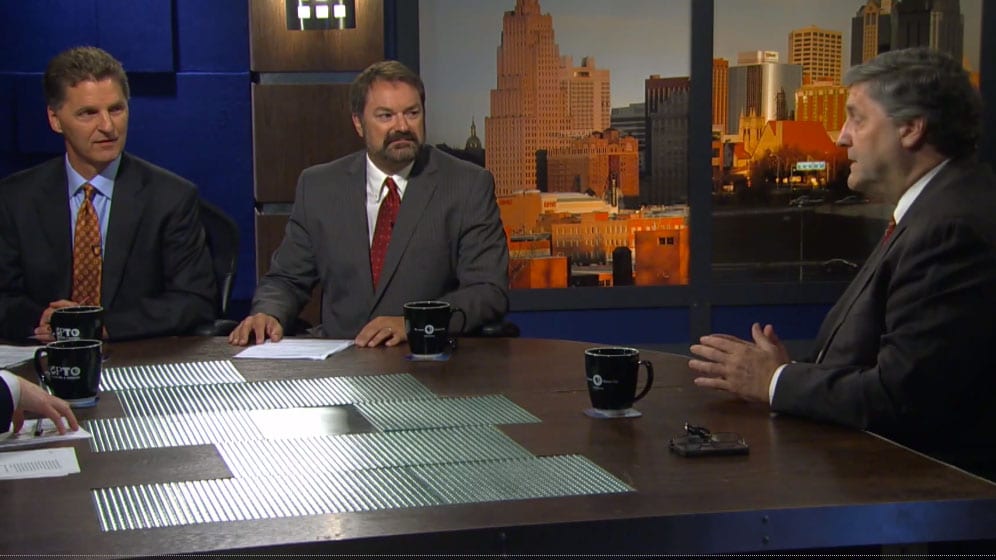 This week, Kansas Governor Sam Brownback and his Democratic opponent Paul Davis shared the stage for the first time in a debate at the Kansas State Fair in Hutchinson. It was a lively, contentious exchange. But how many of the candidates claims were true?  Working feverishly behind the scenes this week to check the facts: Prof. Bob Beatty, Washburn University Political Scientist; Steve Kraske, KCUR/UMKC and Dave Helling of the Kansas City Star.

Also debating at the Kansas State Fair for the very first time in this campaign were United States Senator Pat Roberts and Independent Party candidate Greg Orman. Absent from the stage, Democrat Chad Taylor who abruptly withdrew from the race last week.

On the other side of state line this week, some political observers are asking does Missouri Governor Jay Nixon have any friends left in the state capitol after lawmakers overturn more than 50 of his vetoes. Nixon’s fellow Democrats joined with Republicans in defeating many of his decisions.

Making national news was a decision to overturn the governor’s veto of a bill requiring women to wait 72 hours before having an abortion. Plus, a bill that now expands the open carrying of weapons, trains teachers to carry guns in their classrooms and lowers the age to carry a concealed weapon from 21 to 19.

For many people, the biggest news story of the week was the opening of a store selling Swedish meatballs and easy assembly furniture. Some Kansas City area customers had been camping outside the doors of the new IKEA for 2 days for the chance to win a free sofa and other giveaways. The 359,000-square-foot store, on the southeast corner of I-35 and Johnson Drive, is only the 40th IKEA in the nation, and the first in either Kansas or Missouri. But is the hoopla over its opening total hype or just right?

Nick Haines and his panel analyze both stories

Taking a look at how green the furniture megastore actually is