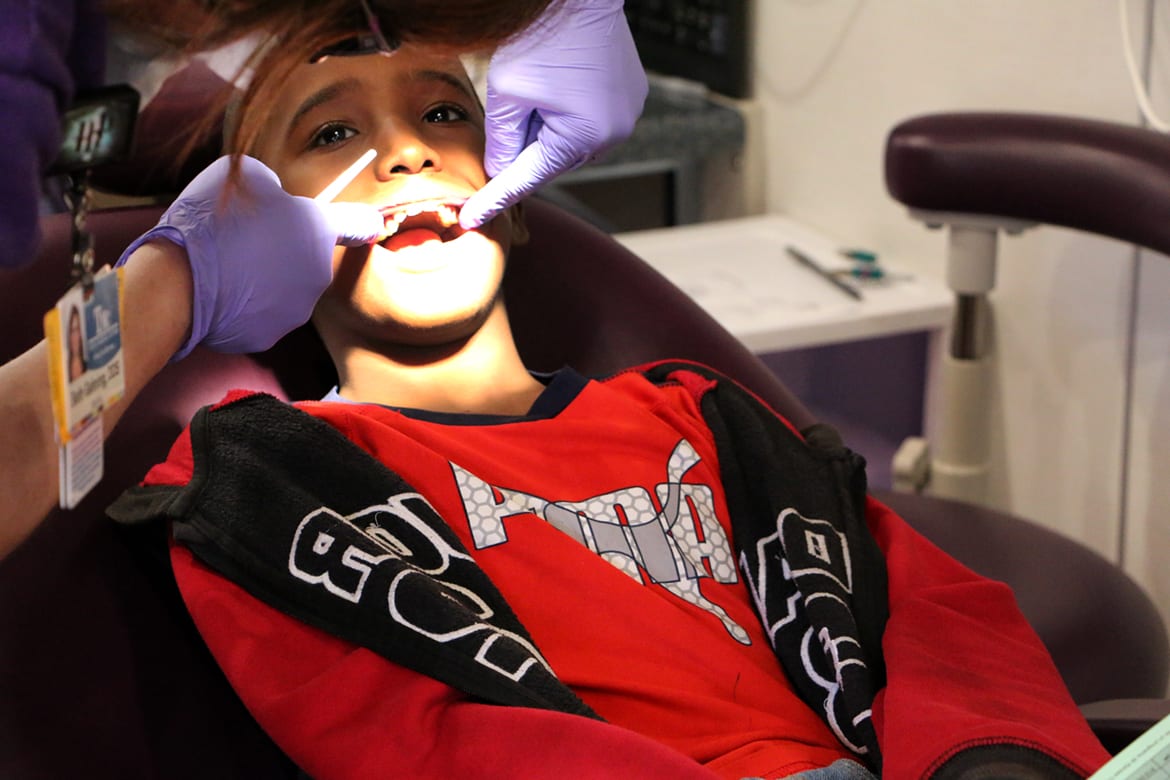 Yayhe Mohamed, 10, was among the participants at a health screening event held Monday at the Chouteau Courts public housing complex at 586 Tracy Ave., in Kansas City, Mo. (Photo by Mike Sherry/The Hale Center for Journalism)
Share this story

Yahye Mohamed wants to be a surgeon when he grows up, but the shoe was on the other foot Monday when he attended a health fair at his public housing complex in Kansas City, Mo.

Or, to be more precise, some hands were in his mouth.

Shortly after he hopped aboard Truman Medical Centers’ mobile dental bus, parked at the Chouteau Courts development at 586 Tracy Ave., Yahye, 10, was in an exam chair.

The experience left the Garfield Elementary fourth-grader with mixed feelings.

He wasn’t thrilled about spending some of his spring break at the dentist, and it was sort of fun, sort of scary, when the chair moved up and down.

But Yayhe acknowledged that a mobile dental office had its advantages.

“If you go to a real dentist in a hospital, it’s kind of boring because you have to wait,” he said. “That’s why I like the bus.”

Monday’s health screening resulted from a partnership between Truman, Samuel U. Rodgers Health Center, Kansas City University of Medicine and Biosciences, and the Housing Authority of Kansas City, Mo.

In addition to dental services, there were vision screenings, healthy eating consultations, checks of height, weight and blood pressure, and information on applying for Medicaid and for insurance through the Affordable Care Act.

This marks the screening’s second year.

Organizers said it was part of a larger effort to improve care and access to medical services at Chouteau Courts and the nearby Riverview Gardens complex. Data shows these public housing complexes are hot spots for hospitalizations and emergency room use at Truman.

The two complexes combined have more than 350 families and perhaps triple that number of children, says Edwin Lowndes, executive director of the Housing Authority of Kansas City.

Bringing services to the residents was an “an opportunity to show the families that live here that our community cares,” Lowndes says.

Health is an important element of that, he says: The health fair reminds them that “they have to take care of themselves, and we are going to help.”

Yayhe’s complaints notwithstanding, organizers chose to hold the event during spring break while kids were out of school. The event targeted kids from 5 to 13 years old.

Hilda Fuentes, CEO of Samuel U. Rodgers, says it’s important to start early with messages about eating the right foods and making healthy choices. She got a glimpse of how the health fair contributed to that education.

“I just saw a child walk out, and he was brushing his teeth because he had just gotten a toothbrush and toothpaste,” Fuentes says, “and somebody was saying to him, ‘OK, now don’t forget to get the back and don’t forget to brush your tongue.’ And he was paying attention.”

Editor’s note: Funding for the initiative described in the story is provided by a grant from the Health Care Foundation of Greater Kansas City, which also helps underwrite Heartland Health Monitor.